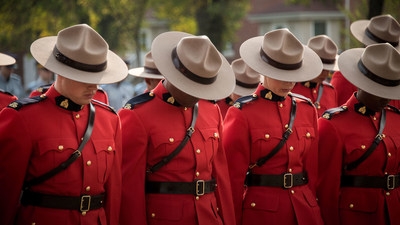 In keeping with a tradition that began in the mid-1930s, RCMP members from across Canada gathered on Sleigh Square to honour their comrades who lost their lives in the line of duty. The ceremony included a memorial parade, the laying of three wreaths at the RCMP Cenotaph, the reading of the names of the fallen, bagpipe laments, bugle calls and two minutes of silence.

This year, the name of Const. Richer E.-S. Dubuc was added to the cenotaph, bringing the total number of fallen members to 238 since the creation of the North-West Mounted Police in 1873.

Dubuc is also being added to the online RCMP Honour Roll and to the Canadian Virtual War Memorial with the following information:

The RCMP National Memorial Service — an annual event held the second Sunday of September — was attended by more than 700 people this year, including family and friends of fallen RCMP members; RCMP members, veterans and cadets; and members of the U.S Border Patrol and the Montana Highway Patrol.

“We can never fully repay the debt we owe to our brothers and sisters who died in the line of duty, nor can we repay it to their family and friends,” Dubeau said. “But what we can do is take this time to remember and show our gratitude. This helps us heal and reminds us how important it is to continue on and live meaningful lives.”