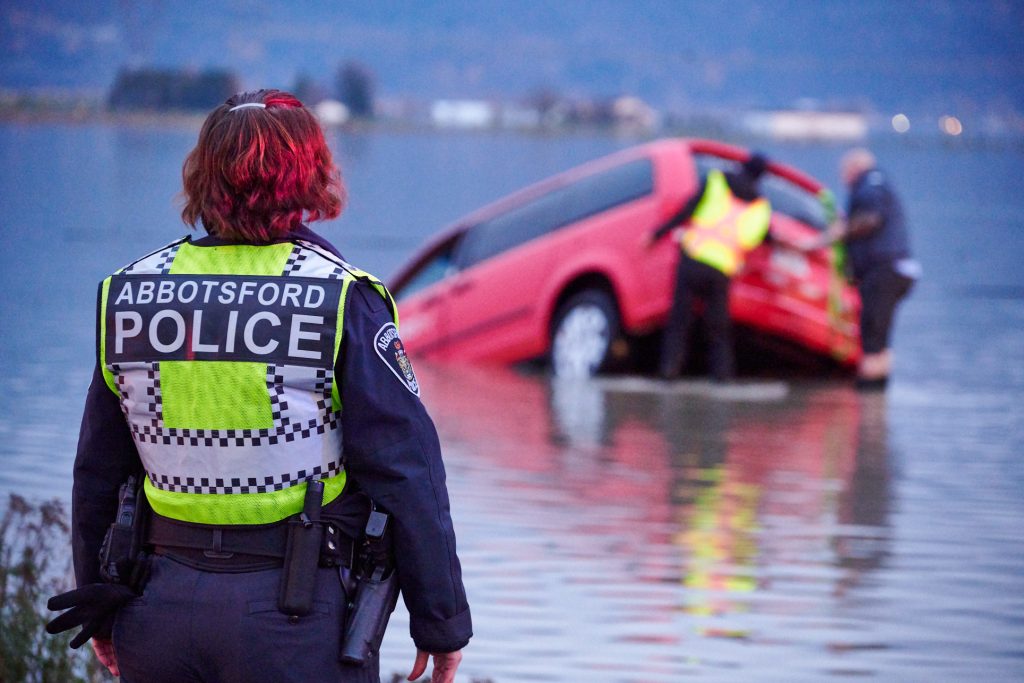 Blue Line editor Brittani Schroeder had the chance to speak with Paul Walker of the Abbotsford Police Department (AbbyPD) about the recent flooding in B.C. and the steps that were taken to ensure the safety of everyone in their community.

Q: When the warning was sounded for potential flooding, what was the first thing that the Abbotsford Police Department did?

On November 14th, 2021, when the rains became heavy and the water levels started to rise, AbbyPD frontline officers started responding to calls of flooding roads and small mudslides within our community. Our officers went from call to call assisting in evacuations of homes, closing roads down and ensuring the members of our community were safe.

Further, we utilized our social media channels to update the public with the best information we had throughout the first night and continued to provide updates to the public as we became aware of them.

Q: With so many people in your community having to leave their homes, how did the AbbyPD coordinate the evacuation?

AbbyPD was part of the Emergency Operations Center (EOC), which was set up late afternoon on the 14th by the City of Abbotsford. This allowed for a team approach between all first responders, city staff and rescue crews assisting in the unfolding events. AbbyPD assisted in door-to-door evacuation notifications, the rescuing of citizens from vehicles submerged in water, and assisted with the clearing of Highway 1 of vehicles within the Abbotsford area as the waters started to overtake the road.

Q: How does the AbbyPD help residents see it’s important to leave when an evacuation order comes through?

During the event, the entire Sumas Prairie area was ordered to evacuate, which consists of approximately 1,200 homes. To put that into perspective, this area is the size of the entire City of Burnaby. Many people left their homes, but some decided to stay behind and tend to their livestock. In peoples’ minds, leaving their valuables behind and their homes unoccupied is a big concern. AbbbyPD erected checkpoints into the Sumas Prairie that were staffed 24 hours a day to provide extra protection for the area, ensuring that only residents were allowed in when it was safe to return home. Roving patrols were also conducted along the roadways that were still driveable.

We also made sure to provide real-time updates on our social media accounts with pictures and videos, which allowed our community a first-hand look at what was occurring. This enabled the residents to make decisions with up-to-date information, which hopefully made it a little easier for them to leave, knowing the risks to human life by staying behind.

Q: Is there a story you can tell of someone on your team who went above and beyond to help the community?

There are many stories that have occurred throughout the past few weeks, but on one occasion we had one of our officers respond to a 911 call where a driver of a vehicle found themselves getting stuck in deep water within the Sumas Prairie. The vehicle was taking on water quickly and the driver was unable to get out. This officer made it to the area but couldn’t drive up to the sinking car. They proceeded to swim out to the driver and rescued them from their vehicle, getting them to safety and awaiting an ambulance.

In this case, other than being very cold and wet, the driver wasn’t injured nor was our officer. This just speaks to the dedication and professionalism of the men and women of our organization.

Q: What steps will the AbbyPD take in the aftermath of a crisis like this?

AbbyPD continues to provide scene security to the Sumas Prairie area, manning checkpoints 24 hours a day and allowing access to residents only. We will continue to support the members of our community by facilitating access to residents within the affected areas, and to ensure the roadways within these areas are safe for travel. We continue to maintain a presence within the EOC and will continue to work with all our community partners until everyone returns home. All the men and women of AbbyPD, along with the law enforcement partners that have assisted us, continue to maintain a visual presence within this area with a sole purpose of protecting life and property within this area.

Editor’s Note: At the time of this interview, the Sumas Prairie was still dealing with high levels of water, whilst finding the best way to get members of their community back to their homes.