How VIA Rail Canada Police and Corporate Security is adopting proactive policing to secure a 12,500-km network coast to coast 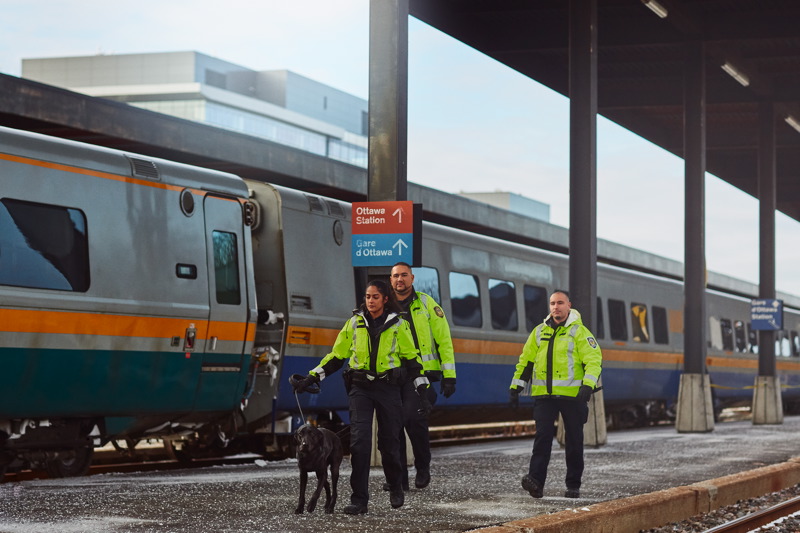 In 2015 Peter Lambrinakos left the Montréal Police Service and became VIA Rail Canada’s first Chief of Police and Corporate Security. In the four years that followed, VIA Rail underwent what it calls a profound evolution in its approach to security in order to meet the needs and expectations of its passengers, employees and other stakeholders. Today, as the only intercity passenger rail police in Canada, VIA Rail Police and Corporate Security plays a key role in ensuring the safety and security of intercity passenger rail in Canada.

VIA Rail Canada’s passenger rail network operates more than 514 trains per week and over 12,500 kilometres of track. It serves more than 400 communities through 121 stations on a network stretching from Vancouver to Halifax and to as far north as Churchill, Man. Its trains provide essential connections to remote communities, carrying travellers safely and efficiently. In all, VIA Rail moves more than five million passengers per year.

VIA Rail, a government-owned Crown corporation, has rich history and a deep commitment to its passengers and the communities its serves. What was needed, though, was a vision to bring VIA Rail’s security commitments to the next level. From terrorism to criminality to helping at-risk individuals, today’s rail operators need to be prepared to respond to a variety of security challenges, and VIA Rail needed to be ready.

As we know, transportation networks around the world are constantly subject to the potential threats of terrorism and domestic extremism. Globally, passenger rail systems are no exception, as we have seen in several instances in recent years. The sobering reality that passenger rail is not immune to this type of threat is where VIA Rail’s Corporate Security Strategy comes into play, acting as a preventative and proactive safeguard aimed at protecting passengers, employees and the people who use the corporation’s services and stations.

On a day-to-day basis, VIA Rail encounters security concerns similar to other major passenger transportation services when it comes to unruly conduct and criminal activity unrelated to terrorism. Collisions, as well injuries and fatalities involving trains, railway tracks and crossings require prevention, response and support from the police.

Furthermore, there is the ongoing need to safeguard victims of crime, people in crisis, and those experiencing homelessness. Along with corporate needs such as access control and video surveillance management, employee training and exercises, as well as insider threat mitigation and legislative compliance, it is clear the security environment VIA Rail faces today is its most challenging yet.

It was in the context of these challenges that Chief Lambrinakos began the creation of a Corporate Security Strategy. This strategy is comprised of seven key pillars:

The idea behind Chief Lambrinakos’ approach was to illustrate VIA Rail’s security vision in the coming years.

A team exemplary of the organization

The VIA Rail Canada Police is a central part of this strategy. A law enforcement presence in transportation systems is in fact viewed globally as an essential baseline security requirement for reassuring the public, providing deterrence, responding to threats and promoting confidence in travel.

VIA Rail police constables have the same powers as any police officer in Canada. Appointed by a judge of a superior court under section 44.1 of the Railway Safety Act, they have jurisdiction to enforce the laws of Canada or a province to protect property under the ownership, administration or possession of VIA Rail and in any place within 500 metres of VIA Rail’s properties. They are also permitted to come to the protection of persons on VIA Rail’s properties.

VIA Rail Police members come from a variety of law enforcement backgrounds and represent the diverse communities VIA Rail travels across. The constables are also aligned with the strong customer relations approach that is important to the corporation.

While VIA Rail notes it has made great strides in building an effective police and security team, it is their employees across the network that make the difference every day. Enhanced security awareness training and exercises, in addition to a customer focus and heightened vigilance, creates a safe and secure travel experience.

The power of partnerships and innovation

These partnerships have been developed to help VIA Rail respond across the country. Using them as a force multiplier has significantly increased VIA Rail’s success in providing solutions to complex security challenges.

“If there is something I understood in my 30 years of policing and which I will continue to stress, it is that relationships are key. In a relationship — rather than just a partnership — we share a greater commitment to each other by establishing that bond of trust,” explained Chief Lambrinakos.

These trusted partnerships have allowed VIA Rail Police to work with law enforcement across the country to intensify high-visibility sweeps at stations, platforms and on-board trains. Additionally, VIA Rail Police and Corporate Security personnel deploy with partners across the country in joint training exercises for incident response and counterterrorism capabilities. One of the most recent exercises took place in November 2019. Planned and co-ordinated by the Ontario Provincial Police, it was a live, full-scale fictitious domestic terrorism training event involving participation from numerous security stakeholders.

Close partnerships also provide opportunities for tactical units and first responders across Canada to train on board VIA Rail trains and stations, acquiring an enhanced understanding of the passenger rail system. This allows for a more unified and co-ordinated response to railway-related emergencies.

As well, since its creation, VIA Rail Police and Corporate Security has increasingly turned to the latest technologies to enhance operational effectiveness and support local police in their investigations. A centralized Video Surveillance System assists VIA Rail’s Security Operations Team in monitoring activity within VIA Rail stations, maintenance centres and facilities while dispatching security agents who travel on select trains, or police as required. A Records Management System allows VIA Rail police constables to record security events, identify trends and hot spots, and share information with other police services when needed. Deep and dark web monitoring permits surveillance of harmful online content and fraudulent activity. And finally, the Access Control Management System allows for full-station access control across VIA Rail’s assets, 24 hours a day.

Education, prevention, intervention — the many faces of security

Every VIA Rail employee is a part of the security team. Public awareness campaigns enlist employees and the public to “see something, say something” should they notice anything suspicious. These have proven to be a logical response to random terrorism in other countries where attacks were foiled because suspicious behaviours were detected by passengers or officials.

A significant portion of the security incidents are related to social ills facing our communities, including mental health, addiction and people in crisis. One element that is particularly close to the team’s heart is the ties they form with communities, as well as being there to protect people who are vulnerable and at risk by using a problem-resolving approach of prevention and sustainable solutions.

In partnership with police services across the country and Operation Lifesaver, initiatives are under way along the network aimed at developing and implementing lifesaving and suicide prevention measures, as well as a victim support protocol and a rail death protocol. For example, in 2019 VIA Rail led a local initiative in the vicinity of its London, Ont., station in which it worked to prevent incidents involving people experiencing homelessness and/or mental health issues and assisted them in a collaborative and respectful manner.

This pilot project demonstrated that by taking charge of the person and guiding them to proper community resources, this prevention over enforcement approach helps not only the person but also the police forces and the community at large. This successful effort, which in VIA’s opinion showed the values of trust and listening required in these types of interventions, will be deployed at a national level starting this year.

Airport-style security measures are not easily applied to passenger rail, because the open-access rail environment cannot be closed off like an airport. Further, the railway system is integrated within the urban environment. VIA Rail stations are often located in city centres and are used not only by passengers but also as commercial spaces by other people and need to be accessible to all users without having to go through security checks. Therefore, with such a broad network and diverse customer base comes the need for an innovative approach to screening.

In addition to traditional passenger verifications and targeted station deployments, VIA Rail Police has implemented selective baggage screening by using non-intrusive technologies to detect explosives and weapons. Furthermore, VIA Rail Police acquired detection dogs as an effective and non-invasive security strategy in 2017. In fact, they were the first in Canada to use “Vapour Wake” dogs. These intelligent animals are trained to detect explosives in large, moving crowds and in distracting environments like passenger railway stations without impeding customer flow.

Looking to the future

The coming years will be particularly exciting for VIA Rail Police and Corporate Security with the arrival of a new fleet of trains in 2022, bringing with it new technologies and intelligence-gathering tools, such as video surveillance systems in passenger cars and new Train Emergency Response Procedures.

In addition, the proposed High Frequency Rail project could vastly expand VIA Rail’s passenger volumes. The plan would transform passenger rail in Canada by building a railway dedicated to VIA Rail trains linking Quebec City, Montreal, Ottawa and Toronto. New routes would also be established, repurposing discontinued and lower density rail infrastructure between Toronto-Peterborough-Ottawa, Ottawa-Dorion-Montréal and Montréal-Trois-Rivières-Québec, providing services to more communities. All of this would then enlarge the jurisdiction and mandate of VIA Rail police.

VIA Rail Police and Corporate Security is ready to meet these emerging challenges and continue to ensure a safe and secure travel experience for its customers. With the arrival of Chief Lambrinakos, the subsequent establishment of the VIA Rail police force and Corporate Security Strategy and the ongoing evolution and growth of VIA Rail’s safety and security measures, the corporation is successfully securing the safety of its ever-growing public transportation service.

Karl-Philip Marchand Giguere is a public relations advisor with VIA Rail.