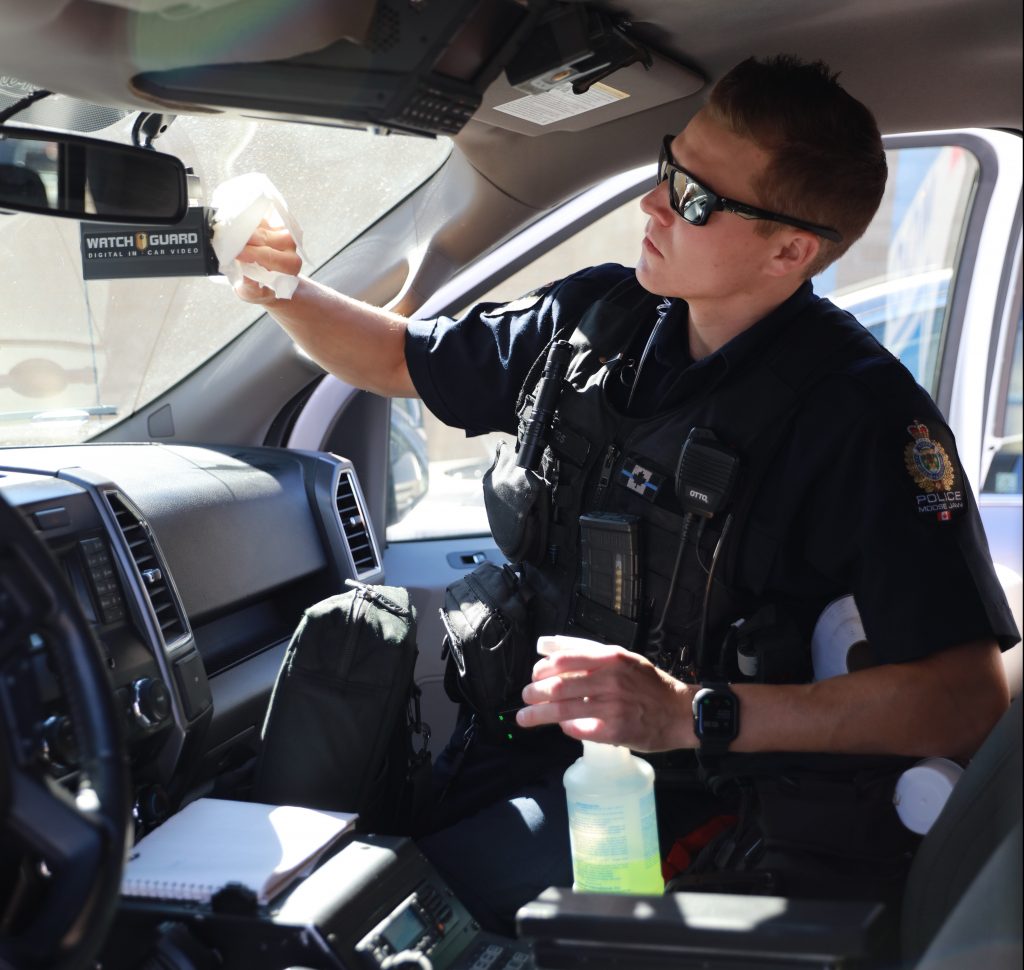 Policing is difficult on the best of days. Adding a pandemic to already existing stress and scrutiny has challenged many police officers in a way they had never imagined. Not only does COVID-19 present an enhanced risk of personal exposure for police officers, it also has a significant impact on conventional law enforcement. Substantial and rapid changes to workplace policies, procedures and professional roles provided an unprecedented opportunity to capture the experiences of police officers during this time of uncertainty. By conducting a multi-jurisdictional research study, we were able to capture an in-depth understanding of the lived experiences of Saskatchewan police officers during the first wave of COVID-19.

Data was collected through an online survey, consisting predominantly of open-ended questions. Participants were recruited through an email cascaded by the Saskatchewan Federation of Police Officers (SFPO) and the National Police Federation (NPF). The SFPO and NPF represent the union associations of the Regina, Saskatoon, Prince Albert, Moose Jaw, Weyburn and Estevan municipal police departments, as well as the RCMP “F” division respectively. Survey responses were received between April 20 and May 25, 2020.

Some officers have taken the changes and challenges in stride.

Findings encompassed both professional and personal elements. Although some participants praised organizational leadership and felt their needs had been met throughout the first wave of COVID-19; other respondents criticized the changes being made and felt a need for clearer communication strategies.

A common thread throughout the data was the fear of bringing the virus home and infecting family members. This fear further compounded reports of increased stress, exhaustion and anxiety that many respondents directly related to social isolation and loss of routine activities. This article will focus on findings related to communicating the unknown, impacts on policing and the repercussions of change throughout the first wave of the pandemic.

Some officers have taken the changes and challenges in stride. One respondent stated, “I feel that police are natural adversity handlers and COVID is just one more situation that we have to handle among the many we face daily” (Respondent 27, April 23, 2020). Other officers expressed having difficulty adapting to the challenges. Negative sentiments most often accompanied top-down communication approaches from administration.

Some respondents criticized admin for making inconsistent decisions and not considering input from officers. An officer conveyed his experience of information overload accompanying the large volume of emails being sent, stating, “Patrol members frequently don’t have time to review 50 emails every day. Most of the emails sent by admin looked identical to the point where they weren’t even read any more” (Respondent 198, May 29, 2020). Many officers felt that pertinent information was overshadowed within pages of bullet points overflowing with irrelevant information.

Being involved in the decision-making process provided officers with a sense of control and security in a time of great uncertainty.

Respondents also noted frustration and confusion due to conflicting information being communicated. One officer suggested that, “listening to employees’ suggestions or, at least, acknowledging [suggestions] that were made and [sharing] why they were rejected would go a long way… Understanding the rationale goes a long way in having people follow directions” (Respondent 57, April 23, 2020).

Positive sentiments were noted when admin attended shift briefings to provide updates, address concerns and consider input from those on the frontlines. These interactions fostered a sense of understanding and appreciation from officers, resulting in survey responses such as: “I don’t think anyone was prepared for this but my organization is doing its best” (Respondent 66, April 23, 2020), and “I think they maybe weren’t well prepared initially, but have done a great job to get ahead of most issues.” (Respondent 90, April 23, 2020).

Being involved in the decision-making process provided officers with a sense of control and security in a time of great uncertainty.

Many officers expressed concern regarding COVID-19 being used as a weapon while responding to calls. Eight respondents reported having been threatened by suspects claiming to be infected. These threats add to the anxiety and stress already faced by police on a regular basis. One respondent noted that the additional threat is “always in the back of our minds, which is draining” (Respondent 65, April 23, 2020). The heightened risk of contracting COVID-19 has resulted in the need to adapt approaches and standards associated with certain offences.

Personal protective equipment (PPE) such as masks, gloves, eye protection and coveralls/gowns have been provided in an attempt to protect officers from potential exposure when working closely with the public. However, many respondents felt there were situations where PPE hindered effective policing.

Respondents often found there was insufficient time to don PPE and that it carried the potential to create distraction. One respondent recalled his mask moving over his eyes when a prisoner resisted (Respondent 173, May 5, 2020), while another’s eye protection fogged up during an incident, impeding his vision (Respondent 9, April 23, 2020). Multiple safety concerns were raised surrounding how these types of distractions decreased overall situational awareness and could lead to an increased risk of injury for officers.

People see PPE gear and immediately become intimidated by it. It takes away the personal intimacy of an interaction. At the end of the day, we are all human and basic human interaction is important. If we are unable to properly communicate and connect with someone, our job instantly becomes more challenging
– Respondent 85, April 23, 2020

Many respondents found that wearing a mask added to the multifaceted challenges police regularly face when attempting to de-escalate situations or connect with victims.

Other changes to daily operations shared by respondents included: addressing low priority calls by telephone; not making arrests on warrants; issuing warnings rather than charges for non-violent crimes; and minimizing the number of officers making contact with a suspect during an arrest. These changes have been implemented in an effort to reduce contact with the public, as well as to not overwhelm the judicial system when court resumes.

Nonetheless, findings suggest these changes are challenging policing instincts and causing moral distress for some.

Respondents expressed mixed feelings regarding the changes taking place in light of the pandemic. Although there were positive responses from some regarding only having to respond to high priority calls, others were frustrated this did not allow them to be proactive in their approaches. One respondent shared her sentiments, writing:

Culture right now is not good. A lot of pressure put on patrol officers who are the main people implementing the changes and having to work the changes… Officers are put in moral dilemmas with regards to not arresting people, executing warrants and impaired drivers… [Policing during COVID-19] has caused me personal resentment towards admin and overall dissatisfaction at work which is not normally like me.
– Respondent 98, April 23, 2020

Some respondents claimed the reduction in arrests were negligent while others cited ethical concerns with not charging those who commit offences. Concerns regarding changes to daily operations combined with reduced comradeship led to a decline in morale across several police services.

Some respondents directly related reduced interaction with colleagues and the closure of fitness centres to a decline in their mental health. Respondents expressed how comradery is used as an outlet to offload daily stressors. One officer outlined the difficulties she was experiencing:

I know it seems small but being able to have a cup of coffee with [coworkers] is a big deal. Team bonding doesn’t exist. We are more stressed at work; they closed our gym, admin sends 100s of emails, admin talks to us like we are children, admin implements useless policies and rules that don’t even work; they have made morale go way down.
– Respondent 79, April 23, 2020

Another respondent described feeling alone and as though all of his mental health retreats had been shut down (Respondent 16, April 26, 2020). Many respondents directly related increased stress, exhaustion and anxiety to the decrease of comradery and emotional outlets that often serve as informal coping mechanisms for officers.

COVID-19 has had an immense impact on day-to-day operations, workplace morale and the overall professional role of police officers. This article focused on research findings related to communicating the unknown, impacts to policing and repercussions of change. Researching the lived experiences of Saskatchewan police officers throughout the first wave of COVID-19 offered insight needed to inform best practices of policing during a pandemic and will enhance preparedness of law enforcement for future outbreaks.

Saskatchewan police officers have experienced multiple stressors on top of those being experienced by the general public. Not only are they worried about being exposed to COVID-19 but have also had multiple operational changes implemented without a voice, been intentionally threatened with COVID-19 by suspects, lost the sense of companionship with colleagues and been denied access to outlets they depend on. One of these circumstances alone would be considered an inconvenience but with all of them being simultaneously stacked against police officers, these circumstances have taken a detrimental toll on many.

It is during these times that it is more important than ever to check in on colleagues, offer support and reach out for support when needed.

Lindsey Boechler, M.A., is a research chair with the Saskatchewan Polytechnic Centre for Health Research, Improvement and Scholarship, and she practiced as a paramedic for 12 years. She is the principle investigator of this study and can be contacted at lindsey.boechler@saskpolytech.ca.

Randy Boechler is a sergeant with Moose Jaw Police Service. He has spent a large component of his 19-year career as an analyst in the Criminal Investigation Section and is currently working towards completing his M.A. in Police Studies.