General Sir Samuel James Brown is credited with inventing the duty belt for tactical advantage after an unfortunate incident left him with one arm. Facing this physical disadvantage as a cavalry officer, he designed a belt with an additional leather strap to which he attached his weapons. This innovative concept — still referred to as the “Sam Browne” today — spread widely and made its way into police forces worldwide. 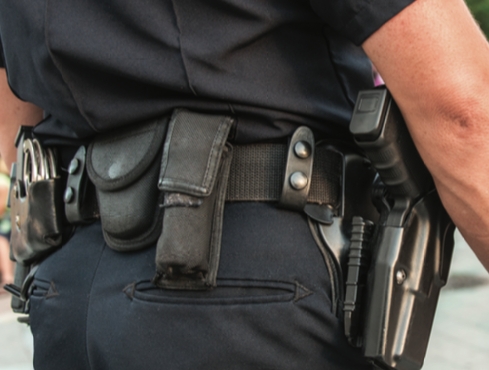 With a weight of 15-20 pounds fully loaded, duty belts continuously place strain on the joints, especially to the lower extremities such as the lower back, hips, knees, and ankles. A recent study showed 86 per cent of officers wearing duty belts have had or are currently experiencing lower back pain. Additionally, police officers employed the longest experienced the highest levels of lower back pain — many of which never experienced lower back pain prior to joining the force.

Leading-edge ergonomics in policing is not an expendable luxury but a necessity. Joint pain substantially costs police agencies through the loss of productivity and increased use of sick leave. As a strategy, employers should promote and support individual efforts towards injury prevention. Police agencies must supply quality equipment and educate officers in order to reduce work related injuries.

Law enforcement officers must also be proactive and mindful of the impact of wearing a fully loaded duty belt. Repetitive movements cause gradual wear on the joints and the consequences are amplified.

Therefore, steps to reduce any negative consequences on the body must be taken. For example, the positioning of equipment on the belt must not only be tactically sound but also strategically placed to best evenly distribute the overall weight.

Officers should also be cognizant of the biomechanical effects and restrictions of motion caused by equipment placement. Any pressure points, discomfort, or excessive friction should be avoided. Overly tight duty belts lead to blood flow restriction with multiple ripple health effects.

Overly loose belts can also become an issue particularly during foot chases as the gun belt bounces uncontrollably and awkwardly. Rather than work in unison with the body, the belt “follows” the officer’s movements, delayed by gravity. This caterpillar effect is also at play while walking.

Moving some equipment into a molle-style (Modular Lightweight Load-carrying Equipment) vest can disperse some of the weight from the hips onto the shoulders.

Wearing a duty belt affects posture and causes pelvic imbalances correlated to back pain. Prolonged exposure to sitting or standing leads to postural fatigue, and therefore it is important to frequently change positions and pay attention to posture. Sitting for extended periods of time causes the lower back muscles to weaken and hips to tighten, making the lower back more vulnerable to injury. When the gluteal muscles become inactive, the lower back can be forced to work and becomes increasingly prone to injury.

Research indicates sitting in a vehicle for four or more hours increases the likelihood of experiencing back pain by 200 per cent. When confined to a vehicle for extended periods of time, changing the position of the seat even slightly is important. When possible, breaking up the drive by getting out and walking around can provide some relief. Other tips include:

• Gel-filled cushions can be used to diminish vibrational magnitude.
• Avoid placing equipment at the rear of the belt.
• Pay attention to vehicle ingress and egress and use the grip handle to reduce some of the abruptness and awkwardness caused by the heavy equipment.

If discomfort or pain can be directly attributed to a repetitive motion performed, modify that motion. It is crucial to address nagging injuries as they typically worsen over time and risk becoming chronic, especially when left untreated.

Duty belt wearers can also significantly reduce injury by maintaining good overall physical fitness. A strong core offers some protection, particularly the lower back. A stretching routine also keeps the ligaments and muscles around the joints more nimble and supple, greatly reducing the likelihood of injury. Engaging in five-minute breaks for stretching throughout the day is extremely beneficial.

Taking proper steps toward injury prevention goes a long way in terms of remaining healthy and pain free. The steps are simple and easily implementable, making them achievable for all law enforcement personnel.

Related
Big problems can lead to big solutions
Strengthening our “resiliency armour”
Have you checked in on your sisters and brothers who are away from the job recently?
Achieving restful sleep