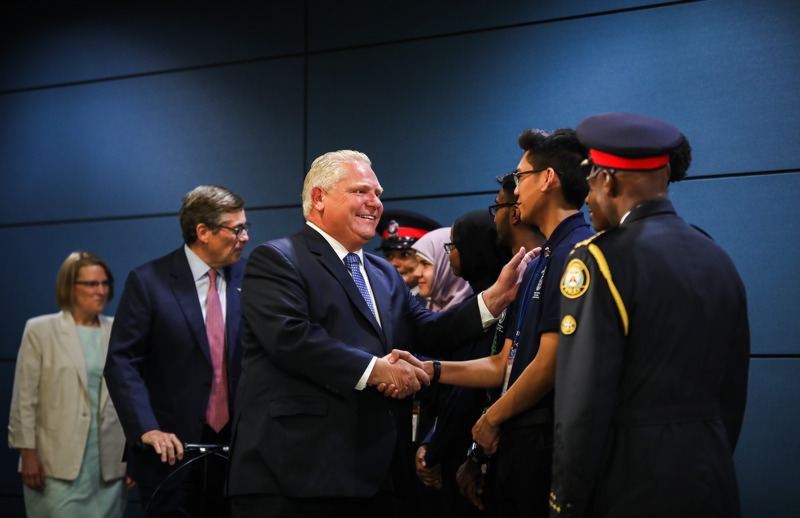 TORONTO — Ontario is spending $3 million to more than double the amount of closed-circuit TV cameras for Toronto amid a recent spate of gun violence.

The three-year investment will expand Toronto’s CCTV system from 34 cameras to 74, which Mayor John Tory said will help ensure police have the resources they need to keep the city safe and hold criminals responsible.

“Toronto is a great city, but we must continue to do more and more to protect our streets, to protect the very neighbourhoods that sometimes end up under siege,” he said.

“While the number of homicides has been reduced this year, the level of gun violence continues to be unacceptable.”

There have been 274 shootings this year so far with 412 victims, which includes those killed and injured. That is considerably higher than mid-August of 2014, when Toronto had seen 117 shootings with 145 victims.

Premier Doug Ford said in total, the province is investing $28 million over four years to fight gun and gang violence in Toronto.

“The gun violence we’ve witnessed in the (Greater Toronto Area) this summer is tragic, it’s senseless and it must stop,” he said. “My message to these violent criminals, to the people terrorizing innocent families is this: we’re coming for you. We will catch you and we will bring you to justice.”

Tory has also been calling on Ottawa to implement a ban on handguns, but Prime Minister Justin Trudeau has so far only said the federal government will consider additional gun control measures and voters will have to wait for the Liberals’ election platform for details.

Tory added Friday that tackling the root causes of gun and gang violence is also important, and he raised the issue last week with Trudeau.

“I am not satisfied that Toronto is receiving all the help that it needs as Canada’s largest city, by way of investing in neighbourhoods and young people to keep gang activity away,” he said.

The NDP’s youth engagement critic and its community safety and correctional services critic said Ontario, too, should focus more on preventing crimes.

“We were disappointed that Doug Ford’s announcement on gun violence again included only tools that could help after a shooting,” Faisal Hassan and Kevin Yarde said in a statement.

“The real work of stopping gun and gang violence starts before kids join gangs, not after heart-breaking and devastating shootings tear families apart and take lives.”