This year is a significant one for pursuit-rated police vehicles in Canada. We lost a few vehicles from the 2017 tests and we gained some new ones. 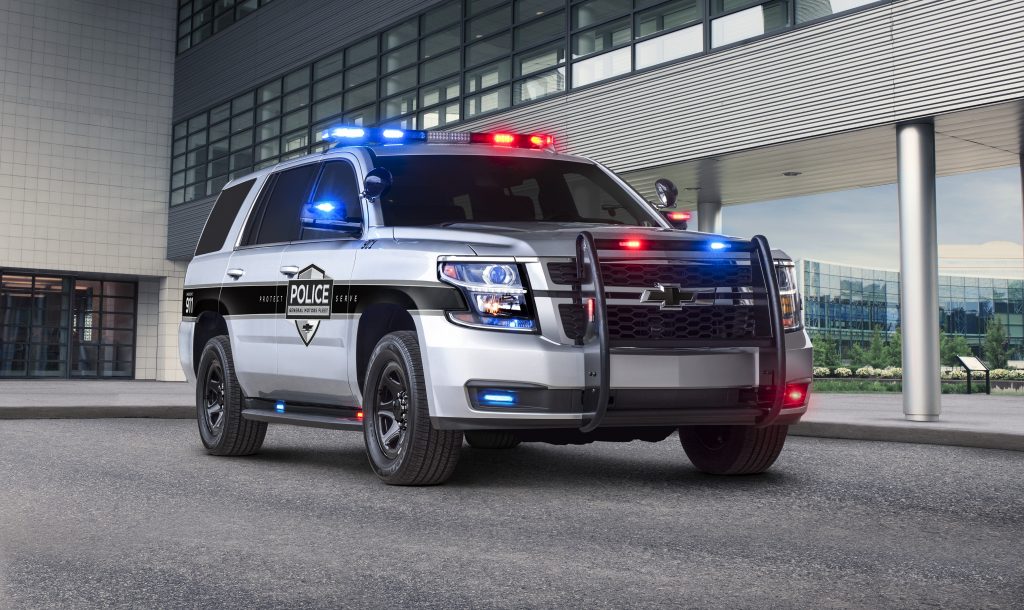 Gone are the Chevrolet Impala, which proved to be too small for two officers, and the Chevrolet Caprice, which was never sold in Canada anyway. Neither will be missed.

Ford is the No. 1 selling pursuit-rated police vehicle in Canada, and they are stretching the envelope by pursuit-rating three new vehicles for 2018: a 2.0-litre EcoBoost front-wheel-drive (FWD) sedan previously sold only as a special service vehicle; a Ford F150 pickup with the 3.5-litre EcoBoost V6; and the very first pursuit-rated hybrid, the Ford Police Responder Hybrid Sedan with a 2.0-litre 4-cylinder gas engine combined with an 88-kW electric motor and a 7.6-kWh lithium-ion battery.

General Motors is concentrating their police sales on the Chevrolet Tahoe, with both a rear-wheel-drive (RWD) and four-wheel-drive (4WD) version — each with the powerful 5.3-litre V8 engine. With the disappearance of the Caprice in 2017, the Chevrolet Tahoe Police Pursuit Vehicle (PPV) is the last remaining full-size body-on-frame pursuit-rated vehicle sold in North America.

Fiat Chrysler continues to amp up their interior workspaces with new features in 2018. They sell the Dodge Charger with the 3.6-litre V6 engine in a RWD version, and the popular 5.7-litre V8 Hemi engine in both an all-wheel-drive (AWD) and RWD version.

This means that the 2018 pursuit-rated police vehicles on the market in Canada are now the most capable, most fuel-efficient and safest vehicles ever made. Faster than most high-performance cars were even ten years ago, they also get better gas mileage than many economy cars could achieve a decade ago.

While there is no strict definition of the term “pursuit-rated,” the Michigan State Police and Los Angeles County Sheriff’s Department, both of whom extensively test every model offered for sale in North America, agree that a pursuit capable police vehicle must be able to handle the higher stress of everyday police use, as well as perform better at high speed than their civilian counterparts. Modifications are usually made to engines, suspension components, cooling systems, transmissions, tires, brakes and computer programming parameters. Traditionally, pursuit-capable vehicles must be able to reach 60 MPH in nine seconds, and 100 MPH in 24 seconds, but without any formal recognition of the term, it will always be up to the individual agencies to determine if a particular vehicle is suitable for their mission.

What happens in Michigan?
Every fall the Michigan State Police, in conjunction with the U.S. National Institute of Justice (NIJ) test the handling and performance of every new police vehicle on the market for the coming year in back-to-back acceleration, braking and lap time tests. These eagerly anticipated tests are seen as the most comprehensive analysis of police vehicles in North America and 2018 will mark the 20th year Blue Line has been compiling and reporting the results.

Below are the Police Category Vehicles that will be available for sale in Canada for 2018, complete with figures from the 2018 Michigan State Police vehicle tests:

Chevrolet
Chevrolet is adding new safety features and options to the 2018 Tahoe Police PPV, designed to help ensure officers make it home safely at the end of every shift. The major option is a new Enhanced Driver Assist Package — the first of its kind for a pursuit-rated vehicle. This package includes five different technologies:

•    Low Speed Forward Automatic Braking automatically applies the brakes to help reduce a collision’s severity at a low speed if the system detects that a front-end collision is imminent and the driver has not already applied the brakes.

•    Forward Collision Alert uses radar and a forward-looking camera to measure the closing speeds between a vehicle and objects in its path. If a driver-adjustable threshold is passed, the system triggers a visual alert and audible beeps or seat pulses, if equipped.

•    Lane Keep Assist with Lane Departure Warning provides gentle steering wheel turns to help drivers avoid crashes due to unintentionally drifting out of their lanes when they are not actively steering and the turn signals are not activated.

•    Power Adjustable Pedals are combined with the standard 10-way power driver seat and tilt wheel to help drivers of all sizes find their optimal driving position for comfort and control.

Ford
Redesigned in 2016, the Ford Police Interceptor Utility looks more truck-like and the Interceptor Sedan now looks smoother in the front. Officer safety features abound, including anti-stab plates in the front seatbacks, front doors that are tethered to prevent them opening more than 50 degrees, Level-III ballistics shields in the front doors, and rear doors that open an inviting 90 degrees. A sensor system uses the rear-mounted backup sensor to detect anyone sneaking up from the rear and warns the driver, raises the driver’s window and locks all doors.

Ford Police Interceptor models are tested with all traction-control and electronic stability control systems fully activated, and are also rear-crash-tested at 75 MPH. Police Interceptor sedans and SUVs are paired with a six-speed automatic transmission that features a “pursuit mode” specially programmed for law enforcement — it automatically switches from fuel-saving to pursuit mode when it detects aggressive driving.

Similar in size and performance to the civilian Ford F150 King Ranch model, the Ford Responder F150 FX4 pickup includes off-road features such as a purpose-tuned suspension, electronic-locking rear axle and underbody skid plates. At 920 kilograms, the F150 has the highest payload capacity of any pursuit-rated police vehicle and can tow up to 3,200 kilograms.

At the other end of the spectrum, the new Ford Responder Hybrid Sedan can rocket to 100 MPH in under 20 seconds… but only if towed behind the new Responder F150. Otherwise, it strolls to 100 in a leisurely 25 seconds, pushing the boundaries somewhat as to what constitutes “pursuit-rated.”

However, the Hybrid was not designed for high-speed chases down four-lane highways. Based on the Ford Fusion mid-sized sedan, it is designed as a reasonably capable option for urban patrol areas and to save money on fuel costs. In addition to a reduced CO2 emissions footprint, Ford estimates that the potential savings for a police agency could be as high as $3,900 U.S., perhaps considerably more in Canada. When not being driven, the Hybrid Sedan can plug in its onboard 120/240-volt battery charger, further increasing the potential range on batteries alone.

Dodge
Dodge has added Rear Cross Path Detection to their Officer Protection Package, first introduced with the 2017 Charger Pursuit. This package, now standard on all Dodge Charger Pursuits, is designed to help keep officers safe by alerting them to movement at the rear or side of a parked vehicle that could indicate an ambush.

Officers can activate the system whenever they are parked by pressing a dedicated auxiliary button on the steering wheel. All four doors must be closed, but the front windows can be up or down. It then uses the 2018 Charger Pursuit’s built-in backup camera, blind spot detection and parking assistance sensors to monitor the surrounding area while officers are occupied.

When the system is activated, an alert sounds, the doors lock, the front windows roll up, reverse lights turn on and the tail lights begin to flash. The 12-inch touchscreen also displays the view from the vehicle backup camera.

The optional touch-screen frees up critical space in the front and includes an interface that allows officers to quickly toggle between vehicle controls without taking their eyes off the road. Auxiliary controls on the steering wheel can also be remapped to aftermarket accessories.

The tests and results
Michigan State Police Precision Driving Unit and the NIJ’s Justice Technology Information Center (JTIC) test all the vehicles together over a three-day period at the Fiat Chrysler Proving Grounds and the Grattan Raceway. Each vehicle is tested without rooftop lights, spotlights, sirens or radio antennas. Tires are original equipment rubber provided by the manufacturer.

Acceleration, braking and top speed tests are performed at the Fiat Chrysler grounds and vehicle dynamics tests are done using the two-mile course at the raceway. (All dimensions and measurements are given in U.S. numbers.)

Vehicle dynamics testing
The objective of the vehicle dynamics testing is to determine the high-speed pursuit handling characteristics. Except for the absence of traffic, the two-mile road course simulates actual pursuit conditions. It evaluates the blend of suspension components plus acceleration and braking ability.

Braking
The objective of the braking test is to determine the deceleration rate attained by each vehicle on twelve 60-0 MPH full stops to the point of impending skid and with ABS in operation. Each vehicle is scored on the average deceleration rate it attains.
Each test vehicle makes two heat-up decelerations from 90 to 0 MPH at 22 ft/sec2 using a decelerometer to maintain rate. The vehicle then turns around and makes six measured stops with threshold braking applied to the point of impending wheel lock, using ABS. Following a four-minute heat-soak, the sequence is repeated. Initial velocity of each deceleration and the exact distance required is used to calculate the deceleration rate. The resulting score is the average of all 12 stops. Stopping distance is calculated by interpolation of results.

Communications  and ergonomics
The objectives of the communications and ergonomics tests are to rate a vehicle’s ability to provide a suitable environment for patrol officers to perform their job, to accommodate required communication and emergency warning equipment and to assess the relative difficulty in installing this equipment. A minimum of four officers independently evaluate ergonomic factors, and Michigan State Police Communications Division personnel then evaluate each vehicle on the ease of equipment installation.

A total of three communications factors are evaluated on a scale of one to ten and averaged among all the testers. The final score is the overall average of all three factors, including dashboard, trunk and engine compartment accessibility.

A total of 27 ergonomic factors are evaluated and the final score is the overall average of all 27 factors, such as seat design, padding, ease of entry, head room, instrument placement, HVAC control placement, visibility and ease of entry and exit.

Fuel economy
While not an indicator of actual mileage that may be experienced, the EPA mileage figures serve as a good comparison of mileage potential from vehicle to vehicle.

Dave Brown is Blue Line’s firearms and police vehicle contributor. He is a tactical firearms trainer and consultant based in Winnipeg, Man. He can be reached at davebrown@blueline.ca.
Print this page