Features
Eye in the sky 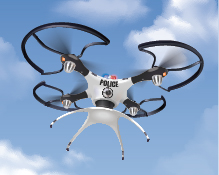 How drones are changing policing operations in Canada

The use of drones can range from a simple remote-control toy that is flown by a child to a multi-million-dollar military grade machine piloted by trained professionals. They can be operated by humans, programmed to be automatic or a combination of both. The term drone refers to an unmanned aerial vehicle (UAV) or unmanned aerial system (UAS) that includes the drone, the pilot and a process that allows the two to communicate.

Historical use of drones

Early drones date back to the First World War where rudimentary unmanned vehicles were built of light-weight foam and propelled by catapults into the air for a few minutes of operation before returning to the ground. The evolution of drones changed drastically during the 1990s when the United States military began to use them for reconnaissance and surveillance purposes in the Persian Gulf and Balkan wars. Nearly 20 years later, the American government outfitted the Predator drone with missiles capable of targeting and killing enemy militants. Under the Obama administration, military drones accounted for 36 airstrikes in 2008, 54 attacks in 2009 and then a combined number of 194 bombings in 2010 and 2011.

Now, drones are performing numerous activities in a variety of professions. For example, surveyors can develop 3D models based on video footage and GPS coordinates recorded by drones. In 2014, a wildfire burned millions of forested hectares near Yellowknife, N.W.T. Equipped with a 24-megapixel camera, a drone was used to take pictures and allow scientists to determine burn severity and the impact on local vegetation, providing a cost-effective alternative to the traditional satellite method.

Drones have even been used for health and humanitarian expeditions. Researchers in Tanzania have utilized drones to map bodies of water such as lakes, rice paddies and irrigation channels to produce a list of mosquito breeding sites. Doctors in remote locations of Rwanda have been able to treat patients with the delivery of medical supplies flown in by drones. During the 2014 flooding in Eastern Europe, a drone was used to assist research efforts by providing real-time information (parts of the region was made unstable by saturated waterway systems and explosive devices left behind from the Kosovo war).

While drones have often been associated with military and commercial use, they have also been operated for illegal purposes. Prison officials have observed a rise in the number of incidents concerning prohibited items such as drugs, weapons and break-out tools being smuggled in by drones piloted by outside individuals. In the United Kingdom, drones have not only dropped packages of contraband items including cell phones and cigarettes, but also burgers from fast food restaurants.

In Canada, the Transportation Safety Board of Canada has documented over 30 incidents where airplane pilots reported drones within the vicinity of their airborne aircraft as well as numerous reports of drones being flown in contravention to national regulations.

Police use and public opinion

One of the earliest examples of Canadian police success stories was in 2013 when a young man wandered away from the scene of a vehicle accident in rural Saskatchewan. With the help of a drone equipped with infrared cameras, police were able to locate the unconscious male and transport him to a medical facility.

“The use of drones has provided police leaders with a viable alternative to traditional operational methods.”

The use of drones by police has provided law enforcement leaders with a viable alternative to traditional operational methods. Drones are less expensive to operate than helicopters and other aircrafts, are easily transferable between sites and are capable of maneuvering within a variety of environments such as forested areas or urban neighbourhoods. However, the use of drones by police departments has not been without controversy.

As a result of drone use by the American military and how drones have been portrayed in the media and Hollywood movies, opponents have disputed the purpose of drone programs by describing them as “boys with toys”. Some have argued that police departments were treating crime as though it was a video game. In a 2016 Canadian study titled Police UAV use: institutional realities and public perceptions, researchers found that public support was higher for search missions, locating suspicious items and responding to disasters than surveillance-related tasks such as carrying out routine patrols and identifying individuals at political demonstrations and sporting events.

The use of drones for monitoring purposes has also strained the relationship between Canadian police agencies and racialized communities. During a 2014 campaign to advocate for a national inquiry into Missing and Murdered Indigenous Women (MMIW), a fraction of the Tyendinaga Mohawks set up a blockade on an Ontario highway. The Ontario Provincial Police (OPP) deployed drones to fly over the blockade to observe the activities of protesters. This decision angered critics who claimed the drones were an intimidation tactic and an “unnecessary use of police resources”.

More recently, the Vancouver Police Department (VPD) deployed a drone to search a large homeless community in Oppenheimer Park after one of its residents was shot in the knee. Although the B.C. Civil Liberties Association (BCCLA) assisted the VPD with drafting the operational procedures for their drone program, members of BCCLA expressed concern when drone footage was made public and publicly questioned whether the privacy rights of the park’s residents were violated in absence of a judicial authorization.

There is little doubt that Canadian police departments will continue to operate drones for a variety of functions. By being an eye in the sky, drones have provided police officers with the enhanced ability to carry out their operational and investigative functions, but it’s also important for police agencies to understand the societal and legal implications of monitoring activities and surveillance. Going forward, it will be a balancing act of using the technology effectively while safeguarding the privacy of the very people that they are there to protect.

Sherri St.Cyr is an 11-year member with the Metro Vancouver Transit Police. She is working on her Doctor of Social Sciences at the Royal Roads University with a dissertation focus on using mobile applications for delivering information on mental health and addiction services to police officers and employees.