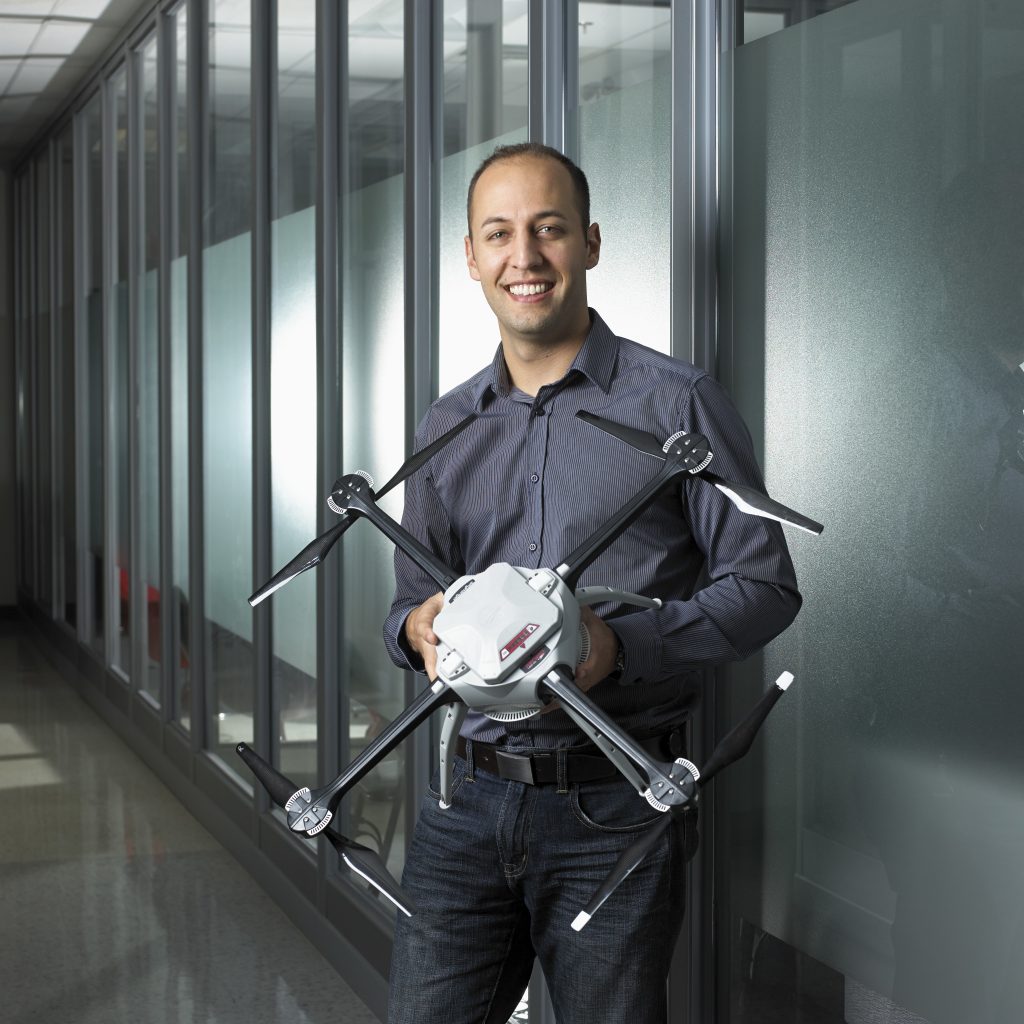 The Aeryon team has a broad range of experience in fields including: computer and electrical engineering, video processing, digital video compression, telecommunications, mechanical and mechatronic system design and software development — as well as knowledge and expertise in robotics and image compression.

1. Describe the process of managing all of those engineering disciplines under one roof.
Just as it takes many systems functioning in unison to enable a drone to fly in some of the harshest environments on the planet, so too does it require many engineering disciplines working well together to design and build a reliable, high performance, technically complex aircraft.

Aeryon Labs has an architect assigned to each technical development area who is responsible for its subsystems on Aeryon’s aircraft.  They ensure that their subsystem meets all of its objectives and requirements without adversely affecting other subsystems.  This group of subsystem architects, along with a Chief Architect, work together to ensure product design and development schedules align.

In many ways, building a drone has the integration complexity of building a cell phone.  Keeping systems small and lightweight drives the need to build many subsystems from scratch, as opposed to using off-the-shelf modules.  This requires Aeryon to have subject matter experts in various fields and specialties.

Aeryon balances the rigor of building a high-performance Unmanned Aircraft System while trying to remain nimble in order to keep pace with the development of advanced component technologies and consumer drones.

2. What are some of the biggest challenges related to retaining and attracting the strongest engineering team in such diverse design areas?
Building a drone requires touching almost every area of engineering – software, AI, computer vision, mechanical engineering, aerodynamics, electrical design and of course the manufacturing engineering capabilities that bring a product to life.  Given the advanced nature of the product, it also means that Aeryon needs some of the brightest minds in each design area.

We, of course, need to focus on the culture to ensure Aeryon is an enjoyable and rewarding place to work.  But, what really helps attract and maintain such brilliant minds is the autonomy we try to give developers to build the best product they can and the mastery of their field they can show by pushing the bounds in their fields of interest.  It also doesn’t hurt that are drones are used for some pretty amazing and meaningful applications!

In 2017 Aeryon Labs Inc. was recognized by The Globe and Mail and Mediacorp Canada Inc., the organizer of the 4th annual Canada’s Top Small & Medium Employers competition, as one of Canada’s best workplaces among small and medium enterprises.  Aeryon was recognized for its forward-thinking human resources policies, including its health spending account that provides greater flexibility and tax-free savings for qualified medical expenses.  Being recognized as a leading workplace is an honor that stems from having great, talented people as well as a solid benefits program. Aeryon has steadily grown over the past ten years and enjoys being an integral part of the vibrant Kitchener/Waterloo and larger Canadian business community. Our talented and diverse team continues to grow, and we will continue to strive to retain and attract the best and brightest minds.”

Aeryon SkyRanger Transmission Line Inspection3. Historically speaking, detail the interest level the founding partners had in robotics prior to forming the company.

Aeryon had three co-founders – Dave Kroetsch, Mike Peasgood and Steffen Lindner, all of who were passionate about robotics prior to forming the company.  The beginnings of Aeryon were borne out of academic robotics competitions run by the Association for Unmanned Vehicle Systems (AUVSI).  These competitions focused on pushing the development of unmanned air, ground and water robotics technologies since the early 1990’s. Dave began competing in these AUVSI student competitions in 1996 and Mike joined in 2002.

The group then worked together at a Waterloo startup called PixStream, designing digital video systems for the TV broadcast industry. This laid the foundation for how the group would approach the drone robotics business.  Coming from a high-tech, enterprise-grade technology background – as opposed to many other drone companies that evolved from either the toy market or military industries – Aeryon took a unique approach to building its products.  The team knew their products needed to be easy to use and deploy at scale.  This led the team to developing and delivering a digital encrypted network that could fly multiple drones.

3. Describe the growing importance robotics and automation play in the future of all tech design.
As corporations and the defense industry recognize the value in safety, efficiency and cost effectiveness of robotics and drones, we believe the demand will exponentially increase. We will continue to see robotics replace humans in many dull, dirty and dangerous operations in the future.  This begins by being an extension of a human – a remote control set of eyes or hands to get a job done.  Humans are, in many ways, limiting the capability of these remote robotics.  These machines are often capable at moving faster and more precisely than humans are able to control them, while not requiring sleep or breaks for meals. They are able to generate far more data than their human operators can consume.

This is where autonomy and AI come to play.  As machines become more autonomous, they will be able to carry out much of their mission requirements without human intervention, and only involve humans for critical decision making.

We’re already seeing this come to pass with drones.  For example, Aeryon began by making simple remote-control drones, which have evolved over the last decade to drones that are automatically able to map an area, track a target with the camera or automatically come home in case of a malfunction.  These capabilities will expand to include on-board AI that can recognize things and automatically conduct missions.

4. Describe how every element of Aeryon Labs’ business is growing – including its manufacturing and/or R&D.
Aeryon is growing every area of the business, from customer support to manufacturing, as the markets increase their adoption of drones.  The past few years saw customers trial a small number of drones to demonstrate the applicability of drones to their missions and prove the utility of Aeryon’s aircraft.  These trials have matured into large deployments, which has put growth demands on the business.  In the last 12 months, Aeryon has opened 2 offices in the US, added sales and support staff in several international geographies and is in the process of adding local manufacturing capabilities in its major markets.

More customer deployments drive more customer requirements. Aeyron prides itself on being able to deliver rapid solutions development through a hands-on, agile team that is able to quickly respond to customer requests.  This has led to an expansion of R&D to fulfill these customer requests – customized payloads, software feature and system integrations.  The product team is also busy innovating.  We’re always busy working on our next-generation aircraft and expanding the team to build systems that are even more autonomous.

5. Describe the breadth of your customer base, not just by sector, but geographically.
Aeryon has customers in over 35 countries, covering 6 of the 7 continents.  While the company was founded with the intent of bringing drones to the commercial market, the company has experienced the most growth in military markets, with over 20 militaries possessing Aeryon products.

As regulations enabling non-governmental use have opened up domestically, we’re seeing our public safety and energy market customers expand their use of drones.  We are also seeing experimentation with consumer drones culminate in the need for industrial-grade aircraft – and this is where Aeryon excels.

6. Describe the importance of where Aeryon Labs is based (Waterloo Region) and the part it plays in remaining relevant along with access to potential hiring talent.
When evaluating locations to start the company, Waterloo was a natural first choice.  The University of Waterloo has created a fantastic technical talent base from which to draw and Aeryon has made heavy use of the Engineering departments co-op intern program. . Our own Chief Technology Officer and Co-Founder, Dave Kroetsch, earned his BASc and MASc in Engineering from the University of Waterloo. Waterloo also has an “enterprise-minded” DNA which has served the company well.

BlackBerry also drew a large number of world-class engineers to the region and as those people seek new employment, Aeryon has been able to draw on that amazing talent very close to home.  In many ways, a drone is a lot like a phone – replace the touch screen with propellers, and the rest of the technologies and challenges in design and manufacturing are the same.

7. Detail the importance of manufacturing product in Canada.
Production in Canada is a strong selling point for many international customers.  Aeryon’s products are not encumbered by US ITAR restrictions, like many other military drones, and Canadian technology and companies are very well received worldwide.

As many high-volume, low-tech jobs have moved overseas, what has remained in Canada is high-tech, high-quality manufacturing.  Aeryon is able to benefit from this trend and makes extensive use of local manufacturing companies for its components.  By maintaining control of final assembly and test in-house at our facility in Waterloo, Aeryon can ensure product quality as well as a tight control on intellectual property.

8. Does the firm currently have room for expansion and what are some targets or goals for the next five years out?
Aeryon continues on a high-growth trajectory – expanding revenues and expanding geographically.  The company has also moved from a hardware-focused company to a series of software offerings integrated with our drones as well as others.

Our 41,000 sq. ft. facility is bursting at the seams and the company is looking to grow our presence in Waterloo.  We have also opened offices in Boston, Massachusetts, Salt Lake City, Utah and Denver, Colorado, where our Aeryon Defense subsidiary is located to better serve our U.S. Department of Defense customers.

We also see opportunity for expansion of the company’s product lines to include even more autonomous capability and AI technologies, which will allow one operator to command multiple drones at one time.

9. What do you feel were some of the key or strategic events that occurred early on to help establish Aeryon Labs as a leader in the global UAV market?
Approaching our markets with a ready-to-fly solution that was focused on reliability and ease-of-use was a key strategic difference in Aeryon’s approach.  While this may seem obvious now, it was definitely innovative in 2007.  Because of the team’s experience in enterprise markets and networked digital technology, our product architecture was years ahead of the competition.

An early tradeshow with the product in Amman, Jordan was also very influential in the company’s direction.  While Aeryon was established to bring drones to the commercial market, an early partner took the product to an international military show.  Aeryon’s approach resonated very well with this customer base, and Aeryon followed these opportunities into international military markets.  This allowed Aeryon to grow and flourish, while waiting for domestic public safety and commercial markets to open up and mature.

Stephen Law is the editor of EP&T Magazine (Electronic Products & Technology). Contact him at slaw@ept.ca or visit ept.ca.
Print this page