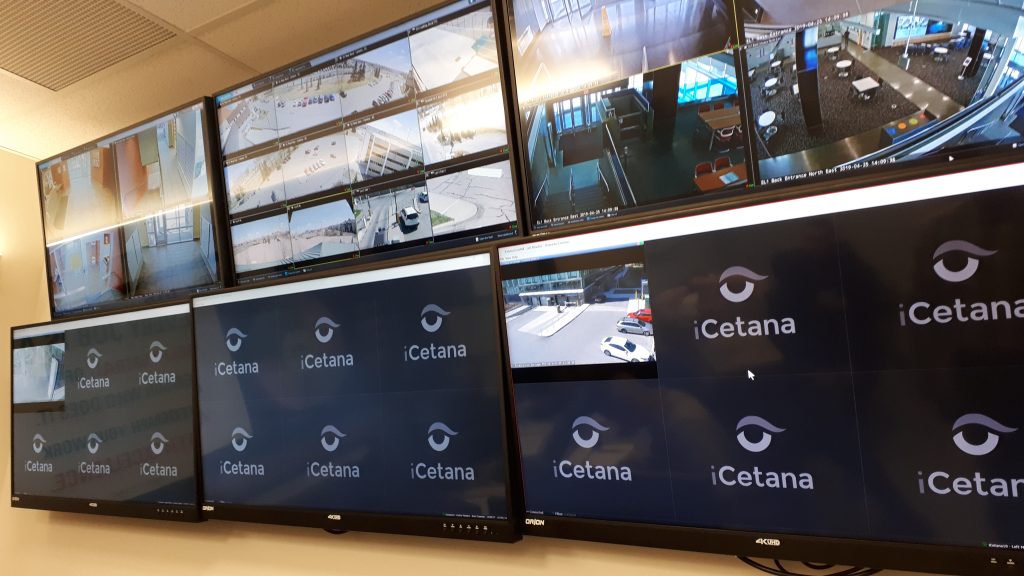 With normal activity the monitors are blank. When something out of the ordinary happens, the live feed automatically pops up onto the screen. The top three monitors continue to cycle through camera feeds. Photo: Mount Royal University

Mount Royal University’s Security Services is replacing aging technology on campus with new safety equipment and technology that is more effective, easier to update and cheaper to operate.

The campus’s nearly 20-year-old network of security cameras has been replaced with high-resolution cameras integrated with artificial intelligence (AI) technology that makes it easier to see issues in real time.

Imagine sitting in front of a bank of monitors connected to all of the cameras across campus and trying to catch everything happening in every busy scene. Now imagine those monitors are blank and only pop up a live visual feed when something out of the ordinary is happening. How much more activity would you notice?

“Study after study shows that a single operator can basically only look at two cameras,” explains Peter Davison, director of Security Services. “Now, the dispatcher sitting at the console is no longer looking at 300 images at a time. This has allowed them to concentrate on just the certain things that pop up.”

The iCetana technology is also known as black screen monitoring and Mount Royal is the first to adopt it anywhere in Canada. Using AI, and over a 14-day period, the system ‘learns’ and recognizes normal activity as movement patterns across campus.

It learns what’s normal when students are on campus and when they’re not, weekday versus weekend, day and night. When it detects an anomaly, it switches immediately from a black screen to a live feed of the situation for the dispatcher to see.

Security Services can determine how much or how little the system will react to, Davison explains. “We can adjust the sensitivity of it to catch more or less of what’s happening at a given location or time of day. We have a completely different environment at night, so pretty much any movement at night brings up the live feed.”

New 360-degree cameras that have been installed across campus catch details the old cameras would have missed, in high resolution and with a much greater range. It’s impossible now for someone to come onto campus without at some point entering the view of at least one of the cameras.

The newly integrated system is mapped with an application called Plan Manager, which shows the campus floor plan and where every device is on campus: every camera, door position switch, card reader and duress alarm. Plan Manager essentially shows a zoomed-out view of movement on campus based on what the cameras are monitoring. A device will flash in the app when it detects unusual movement. On a single screen, a security dispatcher can tap on the flashing device to open a small window for a live feed of the location, while also seeing the entire area.

“Before, if someone told us their bike was stolen outside the library, we might have had the footage of it being stolen, but then we’d lose the person. Now our system will essentially follow that person’s movement,” explains Candice Merrill, manager of Security Services. 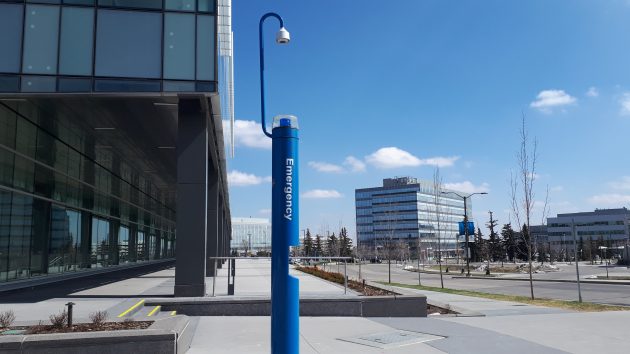 One of the new ‘Code Blue’ stations stands outside the Riddell Library and Learning Centre.
Photo: Mount Royal University

iCentana learns and recognizes shapes, sizes and movement — not people or specific objects — and it can’t differentiate between people. If an active assailant walked down Main Street with a weapon, for example, the system would immediately notice the sudden, hurried movement of all the people (as pixels) around that person because that wouldn’t be normal.
“As that assailant kept walking down Main Street, each of the cameras would start popping up with the live feed because other the people around him would continue to be reacting differently,” Merrill says.

To use another example, the system won’t show the normal flow of people walking into East Gate, but it would flag pixelated people running, dispersing or standing still. It would also flag a scuffle or people sitting instead of walking — anything that’s not normal for that location.

Similarly, the system pops up a live feed when it sees a truck where a car usually goes. It also reacts to pedestrians in parking lots and to people carrying or pulling unusual objects, such as a suitcase. It flagged a man who fell outside the EA building and couldn’t call for help. Security was able to get to him right away.

“The first day we installed iCetana, it caught a vehicle doing donuts in the parking lot and it caught some guys play-fighting on the third floor,” Merrill adds. “Before, with the cameras cycling, and the person on dispatch answering phones and questions, and dispatching people, we probably wouldn’t have seen those things. We may not go to all of those situations, but at least we have an option now because we know it’s happening instead of it being reported after.”

In addition to the new cameras, more card readers are being installed, which are more secure than key locks, and nine help stations — called Code Blues — were set to be in place across campus by the end of summer 2019. Before the blue stations, the only help phones on campus were indoors or on exterior walls of the main building, meaning that people who needed help along a sidewalk or parking lot couldn’t quickly reach Security unless they had a phone and knew the number.

“We identified heavy-population areas and heavy traffic flows and somewhat secluded areas,” Davison explains. “In addition to the ones already in place, there’ll be two on the west side of campus near the Residence, one at East Gate, one in Lot 5 and another at East Residence.”

The new stations include cameras and a two-way communication capability, as well as loudspeakers to enable Security to speak to people or groups in the area. They’ll function as information stations, not only for emergencies but also for wayfinding or general information.

“This is a 118-acre campus,” notes Sommerfeld, adding that one of the university’s goals is to welcome more visitors to campus. “We’re trying to become more porous to the community. If we get an older couple walking through here and they get scared or lost, they can call for help.”

Merrill points out the stations will be valuable to students, too. “At night we have students who walk between East Res and West Res. If they see something but don’t have their phone, there aren’t a lot of spots where they can notify us. So those are there for them.”

High-resolution intercom cameras have been installed at West Gate and East Gate, which enables Security to verify the identity of visitors and let them in remotely when the building is locked at night.

A key benefit to the new, integrated system is its expandability, Sommerfeld says. Already the cameras can gather data such as people-counts to provide information about foot-traffic patterns in hallways. That information can be used to identify where supplies might be running low in bathrooms, for example, or to monitor water use. It can let various departments or services know how many people are using their spaces or products, or how many people they could potentially reach based on foot traffic in the area. The new system is also more impermeable to hackers than the old system was, which dated back to 2001 and was at the end of its lifecycle.

Sommerfeld says another enhancement to the system will alert Security to a fire before it even starts by noticing temperature changes. “Thermal imaging cameras can detect heat long before it’s a fire. We’ll be notified as things are beginning to be issues as opposed to reacting to something that’s already happening.”
“We now have a proactive system,” Davison adds.

The old security system relied on outdated technology, and because nothing was integrated it was actually costlier to operate and far less expandable than what is now in place. Things that were expensive and difficult, such as adding a new card reader at an office area, are now cheap and easy to do.

“We were stuck in old technology and we couldn’t move forward,” Merrill says. “We were constantly being told something wasn’t possible.”

Now, Sommerfeld says, “we can configure it ourselves to meet our evolving needs.”

Card readers will eventually be installed at all exterior doors, so Security won’t have to manually unlock and re-lock 58 doors throughout the main building every day. By 2020/2021, campus can be locked down in an emergency with the press of a button.

Developed in Australia, the iCetana system is popular in the U.S., but Mount Royal is the first organization in Canada to use it — and others are taking interest. Several large organizations in Calgary are coming to campus to see it in action, something Security Services is proud of.

“We are leaders in this area. We now have this secure network of high-quality cameras feeding into a single platform, which is very robust and expandable,” Sommerfeld says. “What it’s doing in tight financial times is leveraging resources on tight budgets. We don’t have the people to be out and about but we have this and it helps us a lot… The bottom line is that we do have better eyes. We’re protecting people and safeguarding assets.”

The new system was partially funded as a capital project through the provincial government’s Infrastructure Maintenance Program.

* Reprinted with permission of Mount Royal University. Originally published in May 2019 here: www.mtroyal.ca/AboutMountRoyal/MediaRoom/Newsroom/ai-comes-to-mount-royal.htm.

Melissa Rolfe is the senior communications strategist with Mount Royal University. Reach her at mrolfe@mtroyal.ca.