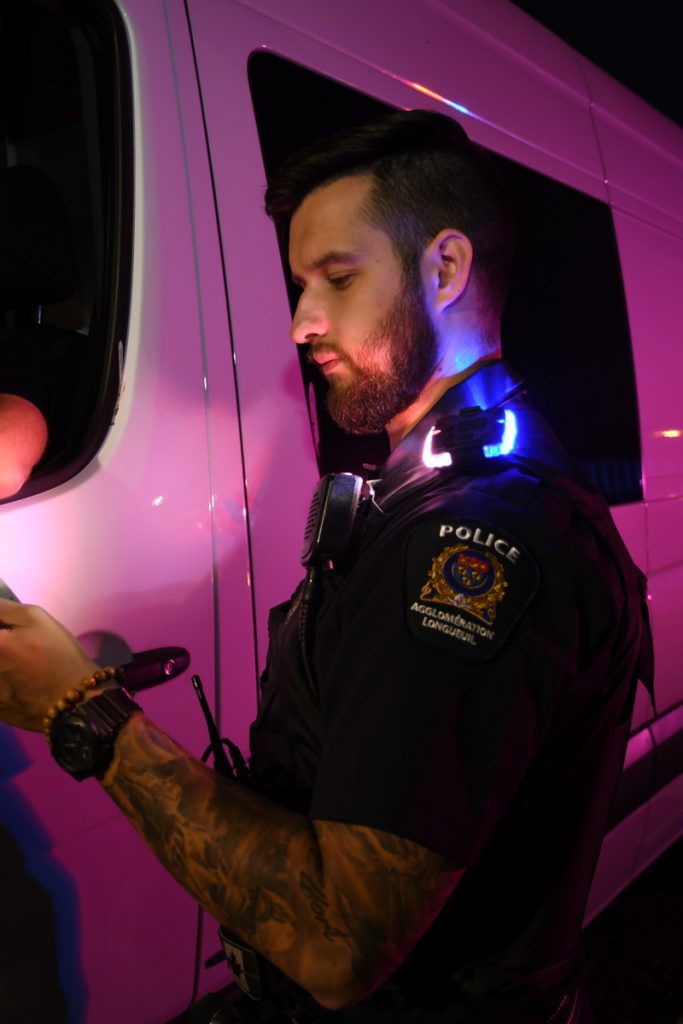 The sun had long set, a main road needed to be closed after a fatal accident, and the lights on top of Marie-Christine Baril’s patrol car malfunctioned. No matter what she tried, they would not turn on. The patrol officer with Quebec’s Service de police de l’agglomération de Longueuil (Urban agglomeration of Longueuil Police Service), or SPAL, knew she had to innovate.

Baril, who has been with the service for 4 years, pulled out her Guardian Angel Law Enforcement Elite Series personal safety lightbar with its magnetic pad. She placed it on top of her car and turned it on, choosing the LED strobe light feature.

“It worked surprisingly well,” she says. “The magnet to secure it is very strong. I was amazed at how efficient it was in helping to close the road and alert everyone. I recommend it to all other officers.”

The first Elite Series personal lights from Guardian Angel began popping up on the shoulders of police officers in Longueuil, Que., just across the St. Lawrence River from Montreal, in 2017, says Patrick Barrière, the section media relations and communications sergeant for SPAL.

“We have our mandatory equipment and then we also have a points system, if you will, that allows for some optional equipment per year,” Barrière says. “The Guardian Angel lightbars are such optional pieces of equipment officers can allocate their points towards.”

In less than two years, more than half of all SPAL officers have added the lightweight (it weighs approximately 92 grams or three ounces), compact device to their kits.

“And that has all been through word-of-mouth,” Barrière adds.

Barrière, who is no longer on patrol due to his communications role, was able to also gift one of these lightbars to a fellow police friend in a different service who was curious about Guardian Angel.

“He loves it. He wears it all the time,” Barrière says.

Earlier this year, Len Garis, who is a retired fire chief and adjunct professor at the University of the Fraser Valley Centre for Public Safety and Criminal Justice Research in British Columbia, shared findings from his study Determinants of Injury and Death in Canadian Police Officers.

“In particular, the study pinpointed violence and traffic accidents as the most common factors in officer fatalities,” writes Garis, who also recently joined the B.C. Injury Research and Prevention Unit as an associate scientist emeritus.

Similarly, the National Law Enforcement Memorial Fund reported motor vehicle-related incidents as a leading cause of line-of-duty deaths for law enforcement officers in the United States in 2017.

Indeed, for those conducting unpredictable traffic stops in the dark, walking the beat at night or investigating dim spaces, light and visibility can mean the difference between life and death.

That’s why Ron Dir, Guardian Angel’s lead designer, and Ed Horton, an electrical engineer, set out to develop a tool to protect law enforcement officers in the line of duty.

“This product is used by people to save other people’s lives,” says Horton, who adds he’s been designing various electronic devices for the past 45 years.

“That was our focus,” Dir concurs, “to give them a tool to use when they need to be visible and to be found.”

Paul J. Hobaica, the fire department physician at North Collier Fire Rescue in Naples, Fla., agrees this device “can save your life.”

In his review of the Guardian Angel, which he uses mostly for personal use but also for work-related situations at times, he says he believes “it has saved my life on many occasions while riding and running at night. It is so powerful and everyone can see this illumination from a great distance.”

He recommends these lights for “anyone not only involved in first response, but believe this should be in everyone’s equipment when training and other sports activities, especially at night.”

Guardian Angel, headquartered in Brookfield, Wis., offers two versions of its newest Elite Series model suited to law enforcement: one featuring a wigwag blue/blue and a second model with a red/blue pattern.

“I use it for every single night or evening shift,” says Alexandre Coulombe, another SPAL patrol officer. “I place it on top of my left shoulder on my ballistic vest to get the most visibility in front of me as well as behind me… And I have it in the white light mode in the front, with the blue and red flasher in the back, for all interactions with vehicles, such as impaired driving checkpoints and on scene at accidents.”

Coulombe notes he also uses the red and white light to write reports at night and when he’s searching a building.

According to Guardian Angel, the latest rendition of the Elite Series is half the size of previous models (it measures 6.9 cm long, 2.5 cm tall and not quite 4.7 cm wide) and now offers three brightness settings. It also boasts a polycarbonate, snap-close, universal micro USB charging port and a smaller battery. All Elite Series devices have one ultra-bright white LED on the top, a single red LED work light, and either side can flash or stay on.

“I mostly use my lightbar for the verification of documents, using the white and red light,” notes SPAL’s Const. Michaël Henri.

Henri is one of the more recent officers to acquire this wearable lightbar and says he “fell totally in love with it” from the first use. Even after accidentally forgetting his reflective traffic vest during one shift, he knew he was in good hands with the Guardian Angel on his shoulder.

“The light is truly powerful.”

While the magnet allows the product to be mounted to any piece of clothing or headgear, etc., there is an arm strap mount available as well and various other customization.

The company also notes the Elite Series carries an IP68 rating, which means it can “withstand dust, dirt and sand and is resistant to submersion up to a maximum depth of 1.5 metres underwater for up to 30 minutes.” However, the unit is “designed to be water resistant if the charging port plug is securely put into place and not submerged to depths over 10 feet,” Guardian Angel explains.

“This product is about providing illumination without boundaries,” Dir points out.

SPAL’s co-ordinator for handling infractions to provincial liquor laws, Const. Stephen Pagé, works in plain clothes with a ballistic vest underneath. He says the lightbar’s magnet is strong enough to be placed on his vest, under his clothes and still attach to the device outside his clothing.

“I work a lot in the restaurant and bar atmosphere,” Pagé continues. “When you find yourself in an illegal establishment or one that is over capacity and you need to act quickly, you turn on your Guardian Angel and it clearly identifies you as a police officer. The lighting in these places is often dim so it is important for people to know the police are there when there is an altercation.”

He says the device is also helpful in identifying his colleagues who may also be in plain clothes and invites the co-operation of the public.

“When you have four or five of you spread out over a dark bar, it’s helpful to see where we all are,” Pagé explains. “And I should also point out, if an arrest had to be made, let’s say, the identification of a police officer cannot be doubted in court thanks to the blue and red beacons of the Guardian Angel.”

Coulombe also notes the magnet was so strong it worked when he wanted to mount the lightbar on the trunk of his patrol car instead of resting a flashlight on there, which could roll.
Furthermore, the device has never dropped from her shoulder or come detached for Baril, who also uses the magnet to mount it to her vest — even when she was trying to apprehend someone and control them on the ground.

“It is very shock-resistant,” she says.

A battery that means business

Named one of the “Top 10 Most Wanted Products of 2018” by Officer.com in the U.S., the wearable lightbar’s battery is also the talk of the town in Longueuil.

“I have probably only recharged it once in the last year and a half,” Baril says.

“That’s the most common bit of feedback we hear from officers about the wearable lights—the crazy long battery life,” Barrière adds.

One other positive offshoot of the device is its versatility during some difficult calls, as SPAL officer Jocelyn Beaucage shares.

“I give it to the young kids I’m interacting with,” he says. “If I’m de-escalating a situation, it gets the kids’ attention and they have fun with it. It’s great for their curiosity and gives them something to play with while we focus on the intervention we’re doing with the parents or concerning adults.”

For SPAL patrol officer Alex Grenier, there are no problems whatsoever with the lightbar. He especially appreciates it for house clearing searches and routine traffic stops.

“It’s very reliable,” he tells Blue Line. “In fact, I just used it last week [early September] in the middle of the night.”

There was a call for backup to help with traffic after a major accident, with many injured.

“It had happened at a huge intersection. I used the police light mode in the strobe setting so I could be seen and so traffic would slow down,” he says. “It was safe and efficient and I was able to get to the victims quickly.”

Keeping our officers visible on all roads and in unpredictable situations is ever the priority and for those working hard to keep Longueuil safe, these flashing “Guardian Angels” seem to be doing their job and lightening the load, even as they perch atop officers’ shoulders.