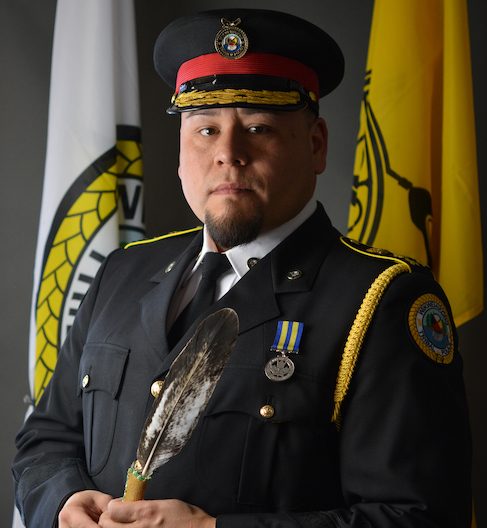 Q: You have more than 20 years of policing experience across Canada in various First Nations communities. What lessons have you have learned along the way?
I’m in my 23rd year of policing now. I’ve had family members and mentors that have led me down this road of providing safety and security for First Nations communities. When I first started, it was a very different time in First Nations policing. We did not have wage parity and the working conditions were not the same as other partners in the RCMP and Ontario Provincial Police (OPP), but we made do and looked after each other. What I have found in my career is that it does not matter which First Nations community you go to; everyone is different. Everyone is unique. You have to go into everything with an open mind and you can’t treat every situation the same.

Q: You worked closely with the OPP regional team for more than 10 years — as a detective constable, frontline officer and as a crisis negotiator. What were those experiences like?
There is a lot of training that goes into becoming a crisis negotiator. You need to build off of past experiences and work with your team. You can’t just go in alone and try to talk a person out of a crazy situation. In some cases, a tactical response is needed, but in most cases we’re able to use our behavioural procedures to bring that person out of the crisis in their mind and back to thinking logically, having them surrender in a peaceful way. Seeing all the different elements of policing and crisis response come together and work as one in a relatively seamless way is one of the most powerful things I was able to take away.

Q: Before your appointment to chief of police, you were the detachment commander for the North Subdivision of Treaty Three Police Service. How did that prepare you for your current role?
It’s a large subdivision; we were looking after about 40-50 officers plus support staff. I had a lot of different positions there, such as the Information Technology division supervisor, the Officer in Charge of Records Management, as well as overseeing professional standards, the Crime Unit and Drug Unit operations. Having all those different roles and responsibilities really honed my skills in various areas and gave me the ability to move on and run the organization. There was also a lot of mentorship provided to me. Not only by the senior command staff, but also the officers at every level and the civilians at every level. Every person in the organization is someone you can derive knowledge from. Even though traditionally, police services have a ranked structure, it’s so important when we are working together that we are all on the same level.

Q: How has your first year as police chief progressed?
Wiikwemkoong is one of the most vibrant, welcoming, caring communities I’ve had the privilege to work for. My family and I have been welcomed into the community with open arms. I firmly believe in principles in policing; you know the police are people and people are the police. It’s important that no matter where I go in policing, that the community I’m in becomes my community. And everyone knows that is my philosophy.

Q: What have been some of the biggest obstacles?
The biggest obstacle, and it’s been the same throughout my career, is First Nations policing in general is viewed as a policing program. Policing should not be a program. Policing needs to be an essential service the community needs to provide safety and security for their people. It should be no different from the need for policing in the City of Toronto or another small municipality. So, because First Nations policing is viewed as a program, there are differences in funding and how that funding is released, and it’s at a lower level than what a non-First Nations police service would receive.

Q: How has the approach to First Nations policing evolved since you began your career?
We have come a long way; from always working alone in very substandard, sometimes dangerous conditions, to now having, in Ontario, wage-parity — soon to be legislated through the new comprehensive Police Services Act. In my belief, and in many First Nations police chiefs’ beliefs, this will take us to the next level in providing safety and security for our communities.

Q: Where is there still room for improvement?
It really comes down to human resources and funding. When you look at the stats from First Nations communities, which are provided to Stats Canada, we are over-represented when it comes to cases with a high crime severity index, high levels of violence and higher than normal levels of crime. You would think that we would be able to focus more resources on that, but because we are set up as a program, it’s not the same. As someone who has not only been working in First Nations policing for his entire career, but who is also an Indigenous man and grew up in an Indigenous community in northern Manitoba, it’s alarming for me. It’s time First Nations communities are provided the same kind of safety and security as every other Canadian community.

Q: A new protocol was signed with the local health centre in Wiikwemkoong in response to a mental health crisis. Why was this important?
It was very noticeable that we were spending a lot of time dealing with mental health crisis calls. We know this protocol model works. It works in cities, towns and in First Nations communities. We are able to partner with mental health crisis teams to ensure people get the help they need. They don’t need a police officer. They require the care that only a mental health specialist can offer. There’s a lot of training that goes into teaching our officers how to deal with mental health, but they can never be experts. By signing this protocol, we are already starting to see a decrease in instances where officers are needing to be at a hospital or spending time transporting individuals to the hospital. So, we are tackling the root of the problem as opposed to putting a band-aid on it.

Q: What are your future plans with the WTPS?
I must say, the future is looking bright. I would like to see us having more human resources, to be able to provide 24-hour policing to our community, which is much needed considering we are one of Canada’s highest crime severity indexes. I would like to partner with the Ministry of the Attorney General’s office to arrange proper court facilities so we can deal with our cases in a safe and effective environment. We don’t want to see more of our people displaced in detention centres two hours away. I also want a formalized wellness plan created and implemented for our police service that includes our culture, language and traditions. This will include having elders on staff with emotional and spiritual needs of our officers and staff.

Visit wikwemikongpolice.ca for more on the service’s history.