Water is life. Over 60 per cent of the human body is composed of water. In fact, proper fluid replenishment is an essential part of health, proper body functioning and preventing dehydration. 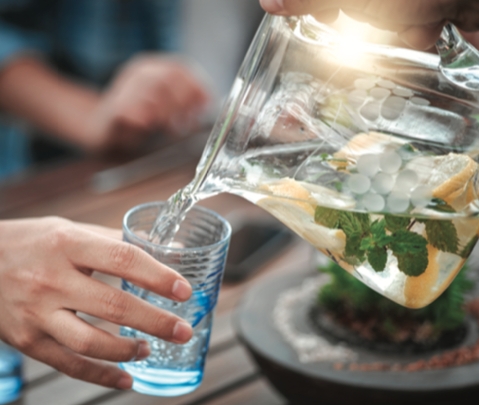 Dehydration commonly occurs when there is loss or removal of water in the cells. It can be a dangerous condition, exposing one to serious potential health problems and even death. Humans have survived up to eight weeks without food and strictly consuming water; however, survival only lasts a short three to seven days without water. We tend to be reminded of its importance in summer months or under warm conditions where we are more susceptible to being re-acquainted with the feeling of thirst. However, water is an important part of every day and night, particularly for shift workers.

Our bodies are constantly losing water, which we must diligently replenish. Under extreme conditions it is possible to expel as much as 1-1.5 litrse every hour. If not adequately replenished, fluid levels can fall quickly and cause a drop in blood pressure, which can be fatal. Even mild dehydration causes stress to the body. Every living cell in our bodies needs water to grow, reproduce and survive. Contrary to the general thought, lean muscle mass has more water content than fat; leaner people can generally tolerate greater water loss than overweight individuals.

Water plays a major role in regulating body temperature through respiration and perspiration. It also allows the body to expel waste. Water acts as a lubricant for our joints, promotes proper digestion, helps deliver oxygen to the body and is needed by the brain to manufacture neurotransmitters and hormones. Proper hydration also boosts the immune system and helps maintain skin health.

Proper fluid intake is needed for optimal mental and physical performance. Shift workers have the supplementary challenge of keeping well hydrated, as these work conditions are often not conducive to regular eating and hydration. Common known side effects of shift work, such as fatigue, nausea, or headaches, can be further exasperated by lack of proper hydration. On night shifts, it is particularly essential to hydrate the body. The “jet lag” effect and interruption to the normal circadian rhythm is worsened by a lack of proper hydration. Shift workers can wake up from sleeping after a night shift with side effects akin to a hangover as a result of dehydration.

Many turn to caffeine as a means of warding off these side effects which can further worsen the level of dehydration. In a culture of coffee drinking as a social practice, it can be easy to consume too much caffeine and excessive consumption of caffeinated drinks or alcohol causes the body to lose water.

Unfortunately, law enforcement uniforms do not promote the regulation of body temperature. Uniforms are typically heavy, layered, dark in appearance and limited in breathability. As a result, uniforms can be taxing on wearers and the effects can be worsened, especially under warm conditions.

As a rule of thumb, when exposed to hot conditions in uniform or exercising for less than one hour, plain old water is sufficient to replenish the body’s needs. Beyond this, an electrolyte “replenisher” should be considered. A thorough review of the available options is beyond the scope of this article but in general the best kind contains the proper balance of carbohydrates, sodium, calcium, magnesium, and potassium. Many sports drinks contain too much sugar and sodium and should be diluted with equal parts of water. This will also minimize the risk of gastro-intestinal upset caused by many sports drinks.

It is also important to pay particular attention to hydration before — as well as after — exercise or going out in hot conditions. The key is to maintain proper electrolyte balance. It is possible to drink too much water, leading to a condition called hypoatremia or “water-intoxication” when sodium levels become too low due to excessive fluid intake. Over hydrating is rare and most commonly seen amongst endurance athletes.

The tint of one’s urine can be used as an indication of hydration. Pale yellow, not clear, is ideal. For healthy individuals, there is a positive correlation between urine colour and dehydration; the darker the colour, the greater the dehydration.

Most experts agree that drinking to thirst is the best approach. The main source of hydration should be water. The most obvious and instinctual way of hydrating is through drinking but fluids are also gained from the food we consume. Other effective hydrating options include coconut water, liquid saturated chia seeds, soups and freshly squeezed fruit juices, eating vegetables and/or infusing water with lemon or ginger for some fun flavour.