DVD burning to become a task of the past 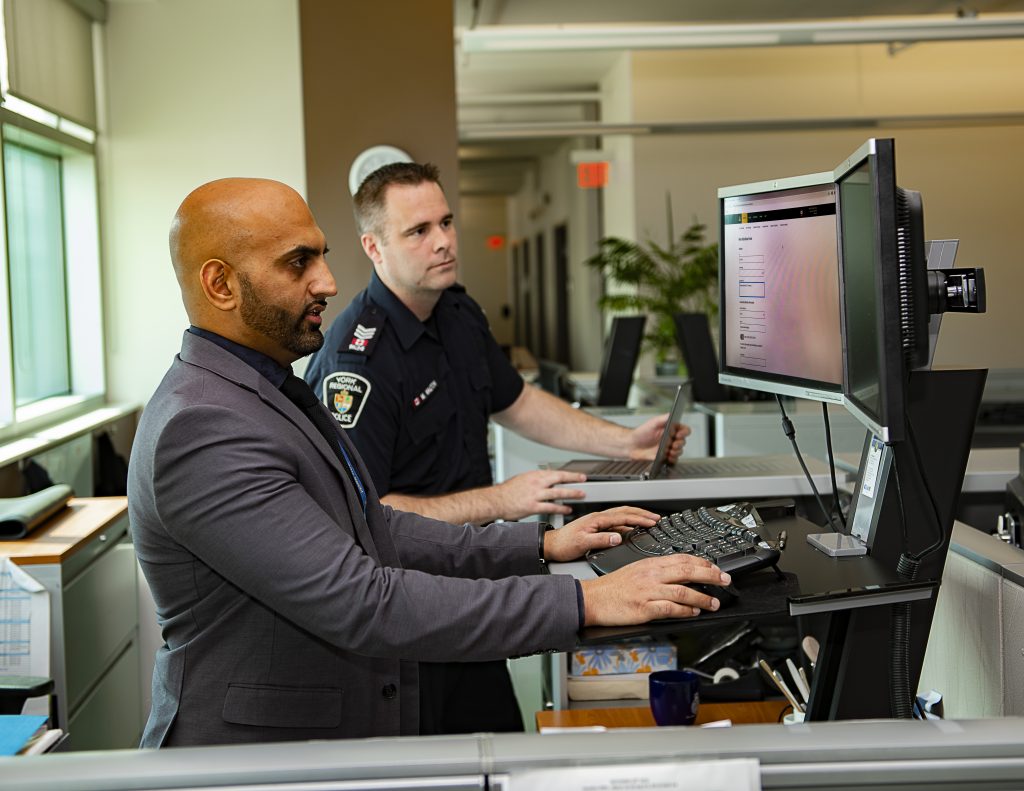 The digital revolution is not leaving York Regional Police (YRP) behind and our partners at Axon Enterprise Inc. are making sure of it.

YRP is moving aggressively to ensure it remains on the leading edge of emerging technology; investing in digital evidence collection and storage, improved in-car cameras, an automatic plate reader system and a new application that will enable citizens to submit evidence, like security camera footage, to police electronically.

The collecting and preserving of evidence is vital in ensuring officers can paint an accurate picture of events that transpired at a crime scene for the courts. YRP has adopted a new Digital Evidence Management System (DEMS) to manage, review and share digital evidence with the courts during the disclosure process. With the purchase of 270 in-car camera systems and 1,800 licenses to the DEMS product called Evidence.com, the system provides a central repository for all evidence in a secure cloud environment. Forty have been rolled out to frontline cruisers so far, with the balance to be installed by 2021.

The system includes an automated redaction tool, audit trails for chain-of-custody purposes and will vastly improve functionality in sharing evidence with prosecutors. It modernizes outdated processes for police agencies as it will allow members to view, sort, tag, manage and securely share digital evidence with crown prosecutors and courts. Officers can easily access evidence for a case during their investigation by a simple click of a mouse. Disclosing evidence will also be much simpler as there will be no need to burn evidence to a DVD.

The first phase includes the collection of in-car camera videos, 911 audio, interview room statements and close circuit television footage from police facilities. During phase two, other types of evidence — such as photos or surveillance footage — will be assessed to determine if they can be moved to the central DEMS.

“We expect this new system will be a game changer for the organization and the courts on how evidence is collected, managed and shared in a timely and secure method,” said YRP Supt. Paulo Da Silva, just newly appointed to deputy chief.

In addition to the DEMS, YRP has signed on to two other innovative solutions from Axon. Citizen for Communities is a public evidence submission portal that allows agencies to accept evidence provided by members of the community electronically during both large-scale and smaller, day-to-day events. This eliminates the need for officers to physically attend residences and businesses to collect surveillance video or audio. The use of Axon Citizen has been critical during the recent pandemic, allowing officers to stay safe and maintain social distancing during non-emergency calls.

In addition to supporting social distancing during COVID-19, this technology assisted YRP in gathering evidence at a much quicker pace during a fatal fail-to-remain collision. YRP appealed to members of the public to provide any digital evidence in the area, including residential or commercial video surveillance, dashcam footage or images. More than 100 submissions were collected in the first 24 hours through the public portal, resulting in significant time savings and which led to an arrest within days. Previously, officers would have had to canvas the area, which would have taken many days. The new DEMS allowed officers to focus on investigation tactics instead of physically canvasing houses and businesses.

“We expect this new system will be a game changer for the organization and the courts on how evidence is collected, managed and shared in a timely and secure method.”
– YRP Infrastructure Services Supt. Paulo Da Silva

The second solution is called Capture Application and it allows officers to record audio or video statements from witnesses or victims and take photos at scenes using their smartphone or tablet.

“YRP continues to lead in the ever-changing world of police technology,” Da Silva continued. “These investments will make our officers and our service more efficient, which will result in better service to our community.”

YRP is also collaborating with Axon to deploy a new license plate reader system, powered by artificial intelligence. Officers will be beta testers for this product, which will provide members with an automated solution as opposed to manually inputting plate numbers into their computers. This tool will assist frontline patrol in their day-to-day activities, saving time and creating efficiencies. It is expected the full fleet will be equipped with this technology by the first quarter of 2021.

YRP continues to move forward with the goal of ensuring the hard work officers devote to investigations does not get lost in an antiquated technical graveyard.

“We are excited to be on the leading edge of this technology, a robust and secure platform for YRP to better manage digital evidence,” Chief Jim MacSween said. “These are the next steps in modernizing our police service.”