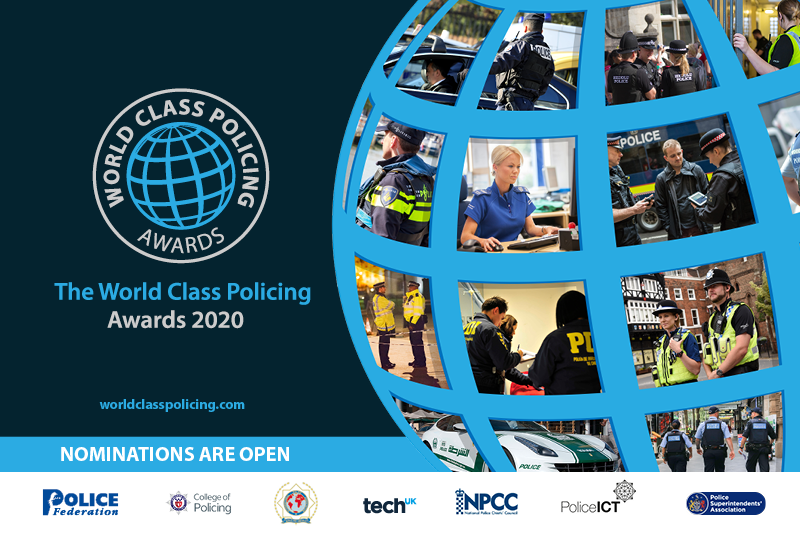 International nominations for the World Class Policing Awards 2020 are now live at www.WorldClassPolicing.com.

From these nominations, 54 finalists were shortlisted by the independent expert judging panel and celebrated at an awards ceremony.

The winners included Operation Encompass, the pioneering project launched by Devon & Cornwall Police in the U.K., supporting children exposed to domestic violence; Queensland Police Service’s Tactical First Aid Project in Australia which equips officers to save lives and increase survival rates for those affected by traumatic injury; and a force-wide initiative by New Zealand Police to equip officers with smartphones and develop apps and online resources that maximize the benefits of mobile working.

The 2020 Awards will be bigger and better with more overseas police forces invited to nominate as well as increased interest from UK police forces in having their officers and staff recognized for their innovation and expertise.

This year will see the introduction of the Platinum, Gold, Silver and Bronze Globe Awards for the overall winners of the World Class Policing 2020 along with Special Category Commendation Awards which will recognize world class performance in specific aspects such as the use of technology, training and development, collaboration and police welfare to mention a few.

Policing excellence takes place every day in every force and now that excellence can receive the recognition it is due with the World Class Policing Awards.

What are the World Class Policing Awards?

The World Class Policing Awards 2020 will honour the very best in policing at an awards ceremony in London, U.K. this November.

The World Class Policing Awards 2020 will:

What makes the World Class Policing Awards different from other awards recognizing the best in policing?

Firstly, anyone can nominate any team in any force area, including multi-agency teams, that have excelled in any area of policing, whether that is operational policing or support functions.

Modern policing is about collaboration, both small and large scale, which is why the World Class Policing Awards will recognize exceptional policing regardless of whether it has been achieved by a team from a single force, a collaboration between forces or a partnership between a force and other agencies or organizations in either the public sector, third sector, commercial or academic.

The awards want to recognize the partners that made the nominated activity a success. However, all nominations will, in due course, require the approval of a lead police force to be accepted.

Secondly, the awards are about recognizing all types of personnel who have made the nominated activity successful including police officers, staff, PCSOs, Specials, volunteers and, of course, employees from the partner organizations.

Finally, the World Class Policing Awards recognizes all types of activity covering the breadth of modern policing – nominations may include but are not confined to:

Nominations are welcome from third party organizations and partners as well as from the police forces themselves but all nominations will need the endorsement of the chief constable, commissioner or head of a lead police force or agency to be considered by the judging panel.

The closing date for completed nominations is May 29. To make a nomination, please go to www.WorldClassPolicing.com to register as a nominator.