“This is a real career with real commitments and it makes a real impact on public safety,” said Metrolinx Special Constable Sgt. Jessica Langley to a roomful of women of all ages and backgrounds during the sold-out Transit Special Constables First Women’s Symposium in Toronto on Aug. 25, 2018. 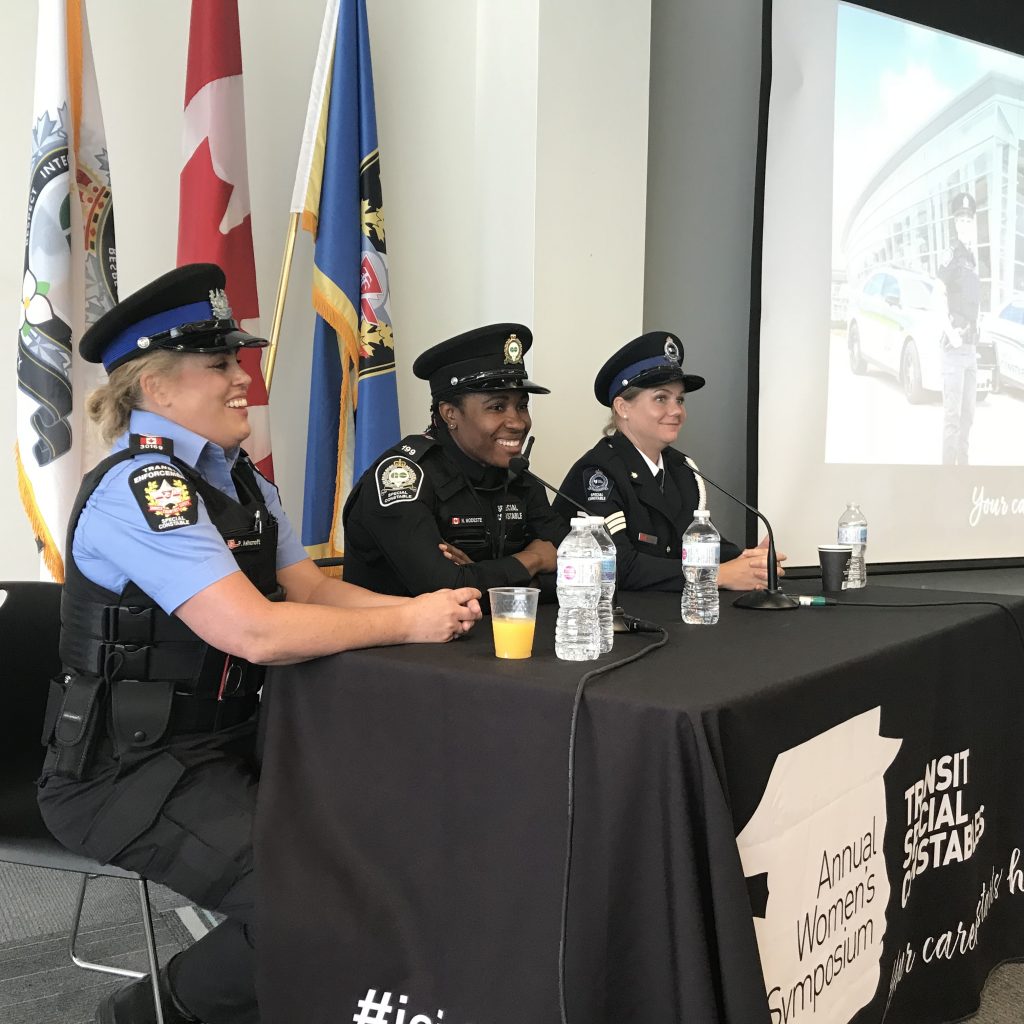 Left to right: Pam Ashcroft of the TTC

Hosted by Toronto Transit Commission (TTC), York Region Transit (YRT) and Metrolinx (GO), the symposium provided a space for attendees to hear from active transit special constables about a career in law enforcement and exactly what that means for women. Effective interviewing skills and tips on obtaining the Applicant Testing Services (ATS) Special Constable Certificate were also discussed.

“Transit is sexy,” Keay said, sending the room into a rumble of laughter.

“When people think transit, they think of driving a bus but it’s a lot more than that; we have law enforcement, call centres, marketing… It’s a career and it’s exciting,” she said. “Eventually, you’ll look at a bus and say, ‘My god, that’s a good looking bus.’”

Being in transit is all about customer service, she added.

“You’re not going to be pulling a gun; you’re going to be dealing with people that are lost, homeless, people with mental health challenges, people with needs… I encourage all of you to look at transit seriously as a career.”

She noted that 35 years ago when she began her career, there were no females in the conferences she’d attend. That’s changing today, she said, and urged the attendees to “keep pushing” through the barriers.

Langley was later joined by fellow special constables Nicesse Modeste of Metrolinx, Pam Ashcroft of the TTC and Susan Wonch of YRT for a casual Question and Answer panel.

They women talked openly about the challenges of work/life balance, especially when it comes to child rearing, as well as mental health, college requirements, shift work realities and what training was like.

“It is a challenge for females,” Langley said in regards to the topic of how to climb the ladder in transit law enforcement while also raising a family. “But we’ve had these conversations and that is the first step in solving the challenges… Women in the workplace matter, our issues matter.”

Wonch, who noted she was the first one in her unit to be pregnant, added challenges will be there, no matter what profession you choose. “It’s what you do with them that counts.”

“It’s a job; we do 12-hour shifts and a lot of the time we don’t stop for lunch,” Ashcroft added.

All three said the best part of the job is interacting with the public and being able to do more for civilians than they expect.

Left to right: Pam Ashcroft of the TTC