Heroes, co-workers, mothers, sisters, aunts, grandmothers, wives, and partners: these are just a few of the names we use on a daily basis when referring to some of the most important people in our lives. The policing community has evolved in relation to women and the roles they take, specifically in relation to the positions women are hired to. They are held to the same hiring standards as men and are valued the same. 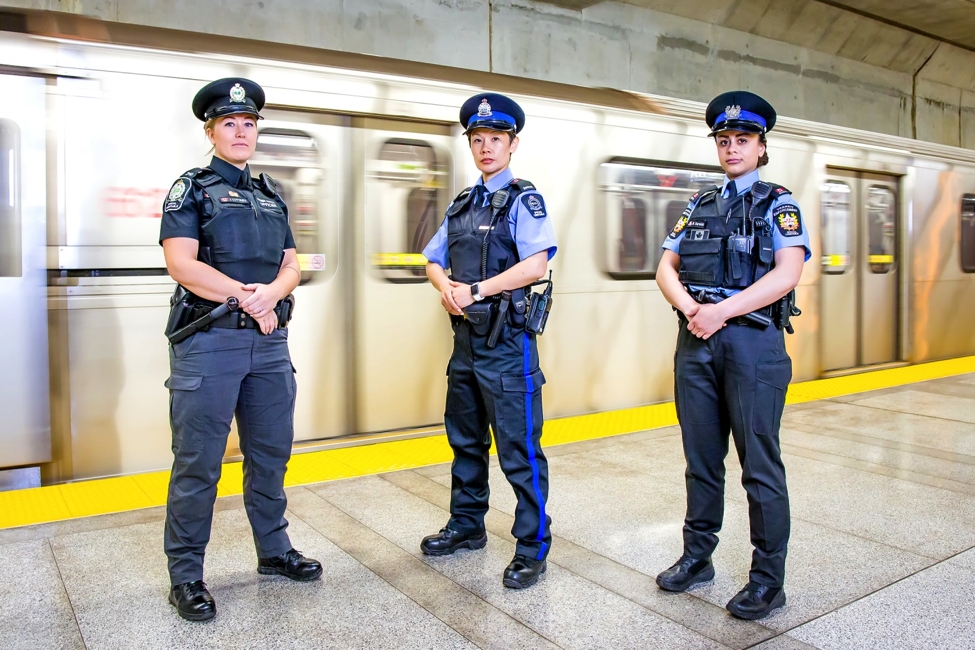 The role of a special constable is evolving in Ontario and organizations need to have the empowerment of a women-balanced workforce. Left to right: Jennifer Cottrell

The question remains why are organizations in this policing community having such a difficult time recruiting women into positions?
In Ontario, there are various avenues for women to explore a career in law enforcement. The traditional well-known avenue is being hired in the role of a municipal, provincial or federal police constable.

The less thought of position would be that of the special constable. In Ontario, as in other provinces, there is an established secondary tier of policing to complement the local policing community. Those special constables are employed by organizations such as transit, community housing, courts and higher learning institutions.

The job of special constables in these companies involves the same and/or similar responsibilities of their counterparts in the policing communities, and because of that, various organizations that employ special constables look for many important qualities in potential candidates. Constables must be honest and have the utmost integrity. They must display courage and perseverance, along with compassion and understanding. These qualities are human traits, not gender traits, and they are the ones that dictate a good constable.

Women often approach and solve problems from different angles and lenses than their male counterparts. Most special constable organizations recognize these differences and see them as a vital component of their future recruits.

All the organizations looked at for this article have been diligently seeking to employ women but have inevitably run into a supply and demand issue. In speaking to recruiters from three major organizations, they advised that most qualified women will either choose to be hired by a police agency first or, once hired by a transit law enforcement company, they move onto one of the many policing agencies shortly afterwards.

How do we curb this from happening and encourage women to look at the profession of being a special constable as an option equal to the policing agencies? Three groups in the Greater Toronto Area have recently joined together to try to combat this problem.
The Toronto Transit Commission (TTC), Metrolinx and York Region Transit (YRT) have established the First Women’s Transit Special Constables Symposium, which took place on Aug. 25, 2018.

This sold-out symposium was a one-day event with various presentations and workshops, including a panel of long serving as well as new female special constables. Practice for the physical component of the hiring process was also available, in addition to an interview techniques seminar.

“One of the reasons I think women do so well in this role is… I think we are able to communicate a little bit differently,” said Susan Wonch, a sergeant and supervisor with YRT, during the symposium. “We see things from a different perspective and I think it’s really important in the workplace to have a whole array of perspectives and skills.”

Wonch, who also noted she was the first one in her unit to be pregnant, added challenges will be there, no matter what profession you choose. “It’s what you do with them that counts.”

TTC, Metrolinx and YRT are leading the way in encouraging an inclusive and diverse workforce. Networks such as Ontario Women Law Enforcement (www.owle.org) have also been leaders in promoting women in the profession of special constables in this province.
The role of a special constable is ever evolving in Ontario and those organizations need to have the empowerment of a women-balanced workforce. Women have to be encouraged to see the benefits of each organization. Each organization canvased offers a competitive salary and pension, maternity leave, career development and challenging work. These are all attributes that should attract a high-calibre woman.

Each special constable organization also offers vast differences to potential candidates. For example, companies in the transportation industry offer an opportunity to work closely with subways, streetcars and buses, in relation to moving hundreds of thousands of customers on a daily basis. This exposure to interactions with the public is unfounded in other policing agencies.

“What I discovered was an opportunity to lead significant changes in a growing field, work in a capacity of public safety and give extra attention to issues impacting our customers they otherwise would never receive,” Langley said. “I found my work was making a real difference to the quality of life of our customers and making real changes in the safety on the Metrolinx transportation system.”

Additionally, she credits Metrolinx for the opportunity to grow into leadership roles and develop new positions that are “positively affecting our work capabilities and service towards public safety.” It’s a rewarding experience that continues to grow, she noted.

“For current and future recruits – never doubt the value inherent in the individual qualities each person brings into this role,” Langley said. “As women, we belong and add value to the organization not because we are ‘as good as the men’ but because we add our diversity in thought and action as individuals. Never lose that which makes you unique and valuable – and always look to support one another.”

David Moskowitz is currently the president of the Ontario Special Constable Association, a role he has served since 2015. He has also been a transit special constable with the TTC for the past four years. Reach him at president@specialconstables.ca.
Print this page