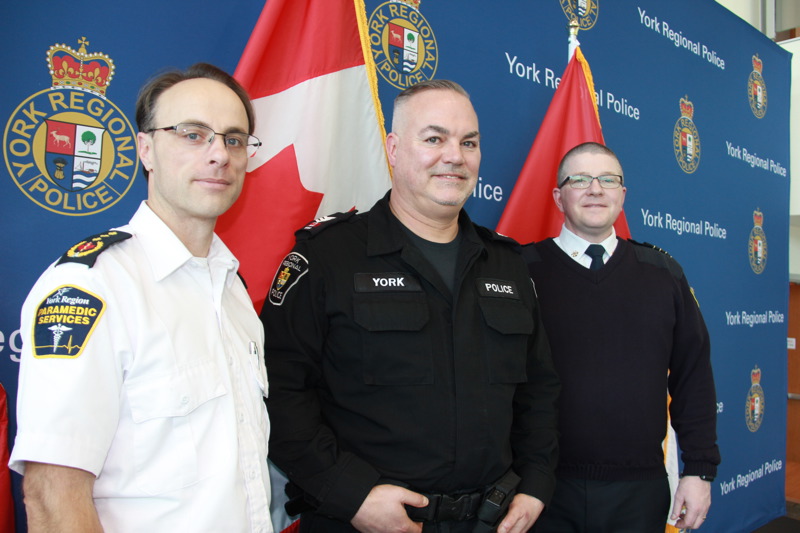 Q: Tell us how this integrated approach for responding to incidents like mass shootings first came about.
Douglas: It started in our own internal exercises—with our eight fire services and one paramedic service. We recognized there was a gap with the response for medical treatment for those who could become victims during a mass casualty incident. We wanted to close that gap. This was a seed that was planted in 2015 and it has become a formalization of integration of inter-agency response. This will be one of the few inter-agency policies that combines all our efforts into one focused force multiplier.

In England at a terrorist event, there were firefighters who wanted to go help people within visual range who were yelling at them, but they didn’t have the policy permission to respond. You can imagine the stress it put on those firefighters. We took a different approach; you’re going to be able to help in a co-ordinated manner and have the permission to do it.

Q: Was there a particular anecdote that cemented the need for more collaboration?
Douglas: There was actually. We conducted a major exercise in the region and we had hostages and people that were injured. This was all a mock-up of an active shooter situation and when we requested fire and paramedic services to attend inside the mall where some of the victims were, we were unable to provide enough safety clearance in order for them to operate to their standards. We had four command posts there. Typically — and cutting out all the police terms — we go in and once it’s safe and clear, then we can have fire and paramedics come in to tend to patients, but during that period of time hours can go by and we lose those patients that otherwise would have survived. That golden hour is really key but even a platinum 10 minutes is more important for us to get in.

To do that, we have to create a safe environment that is consistent with the standards of fire and paramedic services and we’ve managed to figure out what that looks like. That also then became supported by the NFPA (National Fire Protection Association) standard that came out last year. The interesting part is the work we were doing was already aligned with that standard. In fact, we’ve exceeded that standard.

Tait: In an active shooter event, this is a patient-centred event where rapid care is needed. In York Region, we are fortunate in that we have a tactical paramedic program but it’s a resource that isn’t prevalent enough…

This is about how do we tap into all these resources and bring everyone together efficiently because we do need everybody on those calls.

Ryan: We have enough evidence from real-life situations around the world of exactly what we’re trying to prevent from happening — paramedics and firefighters staging a few blocks back of an incident waiting to be cleared to go in. We’re in this business to save lives and we want to be making the right decision so it was timely in terms of world events, and for us to say, “Hey we’re not immune to this in York Region but we’re going to be prepared if it happens.” It wasn’t about can we do this; it was about we have to do this.

Q: What happened next?
Douglas: We came together and had a preliminary discussion on how we would work together to form up a committee to create the training and education standards for it.

Tait: The people that came together to build this program really deserve the credit; these are frontline tri-service staff that do these jobs every day. That’s what helped answer some big questions and it lends credibility to the program.

Ryan: This committee isn’t a one and done deal. It will stay active so we have a tri-service communication group to tackle hot topics; a forum. That was an unintended spinoff: we are communicating and we’re communicating well so let’s keep doing it.

Q: And last fall was a pivotal moment?
Tait: In October 2018, it was ratified that we’d be starting this approach as of January 2019. We had all the tri-services decision makers and senior ranks in the room and presented the program. The result was a full agreement and communication to fully move forward with it.

Q: How is the training happening to date?
Douglas: For us, we are now training all our members in their annual training. So, every sworn member will have this training by the end of 2019. As of the end of February, we already had people deployed with this training in hand. A PowerPoint is YRP’s current training platform. By this summer a video will replace that.

Tait: We’re creating a generic platform that is easily implemented, maintained and shared for this training. We’re set to rollout our training platform in what we’re going to call Program Development Day No. 2 in Q3 of 2019.

Douglas: By the end of 2019, all tri-services will have undergone the first phase of training. We expect this to be a live program, that evolves every year depending on the needs of the community and the members. It will go on to include small scale and larger scale practical exercises, exercises with different jurisdictions… The key piece is developing and maintaining unified command.

It’s a bit of an elusive term in the real world; it sounds good on paper, but what is really good in a practical setting is making sure people are trained and disciplined to stay in that environment. That’s the pivotal part of what we’re trying to do; if we put the leadership at a scene that works co-operatively together, managing each other’s interests, then we can deploy our resources effectively. So, whether it’s a mass casualty event with an active threat, a train crash with chemicals spilled or some type of pandemic we’re dealing with, all of our services, as applied to unified command, can be co-ordinated the same way.

Q: What kind of challenges did you have?
Ryan: Our challenge was how to make this training adaptable to each of those eight fire services. There was the question of cost and if we were increasing the level of service to our community. How do we roll this out because we have associations to deal with? The great part is the committee has made this program that uses our existing knowledge and skills and now we hone in on who’s in charge.

Douglas: We have a common vision through the tri-services: a preservation of life and we all bring different skills to the table to make that happen. The problem was we were working independently of each other. For example, if it was a police-led call, we’d be in charge until someone else spoke up and said let’s move these resources over here… This is different. This is when we already know we’re going to use a co-operative structure. The sooner we’re co-ordinated, the more efficient we are at putting in our assets. More importantly, this program gives all our services permission to work together — permission for me to let fire into the scene. That didn’t exist before. And it doesn’t exist very much in Canada, though we are starting to see some changes, like in Vancouver where they have a program.

Q: Were there any surprises as this program took shape?
Tait: It has brought so many opportunities to engage in great conversations. It has been a remarkable way to build relationships with our counterparts in our fire services and they have really come to the table and embraced it, which is absolutely fantastic to see — that willingness to take on some extra kit, equipment and do some extra training. We have quite a large paramedic service but this model could be a game-changer for a smaller community or rural area where it takes time to get resources in. Then it becomes even more essential to have a unified response to really any incident — it doesn’t have to be a criminal one.

Q: What is the cost to this program?
Tait: It’s scalable for each region truly. You can do it for next to nothing, with just staff time for the training and education.

Ryan: And if there’s a product to be bought — like you want to have tourniquets in your fire trucks — buy the same one your police service and paramedics are using. That’s all part of the communication piece.

Douglas: Recognize there’s some policy considerations to be had… but it’s cost-effective and easy to implement.

Q: How does this program change specific roles in command?
Douglas: They’re doing the same job they normally do; It’s quantifying the risks differently, shifting the risk profile.

Ryan: For us, the roles haven’t changed. The message for our leadership team is: when you arrive on scene, this is going to happen on the hood of an SUV; it’s not a big fancy command post — those arrive hours later — this is the first three arriving units on scene, three people need to get together and strategize who is doing what and where.

Douglas: Let’s say we have a big car accident with extrications required. Typically, as police officers, we are not picking up patients and moving them to an ambulance, but there’s nothing that stops us from doing that. Now we’ll be able to say, “Hey, I’ll do the part of picking the patient up,” and it might be a firefighter saying that too. We have the ability to interchange our roles within these rescue teams, if you will, based on the environment.