It all started with a sketch. 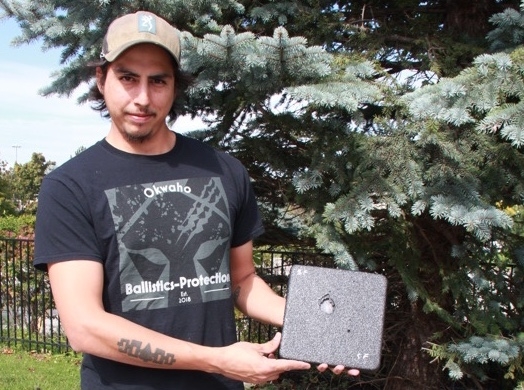 Raymond Janvier tested his body armour plates himself with a .45-70 at 28 yards. He made the hole where those bullets hit even bigger to show how the spall protection coating works.

Raymond Janvier, 28, was training to become a dance instructor in Hamilton, Ont. earlier this year when he began doodling body armour shapes and designs in his dance step notebook.

By March, he had registered his business, Okwaho Ballistics-Protection, and those ink drawings morphed into a reality. He is now in the final stages of preparing to offer his own line of personal ballistic armour inserts.

“These ballistic inserts will be approved as NIJ (National Institute of Justice in the U.S.) Level III category, which means they will be capable of stopping multiple non-AP rounds up to .308 or 7.62mm for rifles and up to .44 magnum for handgun rounds,” Janvier says.

Okwaho, currently an online store (okwahobp.com), went live in September 2018 and at the moment customers can only purchase a tactical kit and products from Shadow Elite/Shadow Strategic through the site. Janvier says he anticipates his plates will be ready to sell online by the end of the year and hopes to have a storefront up and running in Ottawa in about nine months.

“The end goal is to provide quality tactical kit to our law enforcement and military personnel and have it as affordable as possible,” Janvier says. “I want to set a new precedent. You shouldn’t have to pay extremely high prices for something to protect your own life.”

Airsoft connection
Janvier has always had an interest in battle dress uniforms and firearms, as he grew up with a number of extended family members in the marines.

“I was heavily influenced by the military and police,” he says, noting this was instrumental in his character building and the way he sees the world today.

He took the police foundations course at Niagara College and worked in security for a number of years. He is also a member of a professional airsoft team and competes throughout Canada and the U.S.

In fact, it’s a world where he’s a “little bit” of a celebrity; the team was playing recently in Illinois and Janvier had his first experience signing an autograph for a fan who picked him out of the crowd.

Airsoft is the arena where he became involved in tactical training, such as room clearing, and where he made a number of valuable body armour connections. For example, The Requirements Group — manufacturer of the Shadow brands — is a sponsor of Janvier’s team, which is how he began distributing for the company.

“So, I’ve always had an eye out for body armour,” he explains. “But everything I found was made in the U.S. and extremely expensive… I’ll be charging $200 for my plate and the typical price tag for a plate of this level is anywhere from $400-$500… It just goes back to the way I was raised… it’s not the Native American way to take more than what you need.”

Profound protection
After Janvier worked and reworked those initial sketches until he had them they way he wanted, he made a slew of calls to find the base metal for the plates.

“I’m about real-world results; I’m not a procrastinator,” he says. “And I can’t sit around.”

He settled on an AR500 steel plate that will be cut at a facility in Alberta in two shapes initially: a square one for backpacks or briefcases and the Sapi (also known as “shooters”) chest plate cut for tactical vests. It then took more exhaustive research online, via phone and in-person for about another month and a half to find a good composite for spall protection.

Spall protection catches those fragments, Janvier explains, and brought out a prototype of his plate, which he tested himself (he tested it with a .308 and a 7.62×50 at 100, 50 and 28 yards as well as with a .45-70 at 28 yards.) He made the hole where the .45-70 bullet hit multiple times even bigger to show how the coating “caught” all the fragments, preventing any damage to the other side of the plate.

“The only scratches on here are from my fingernails, trying to feel for a bump but there’s no bump and that was a heavy bullet.”

The coating Janvier eventually opted for features an important moisture barrier and he notes he will be spraying the sides of the plate as well as the front and the back to give it a longer shelf life.

The plates will be sprayed at a local facility in Hamilton until Janvier’s own warehouse is ready — he will continue to work out of his home in the meantime.
He can’t yet share the name of the company he found to source this blast mitigation coating, but can say they are a “giant company” with customers in the automotive aftermarket and beyond.

“When I get into production, they are going to be sending me a bulk shipment so I can have it just for my company… This specific coating product has not yet been supplied to their Canadian stores so I will actually be the first to have it here,” Janvier says. “I want police tactical units, SWAT units to be as protected as possible.”

Profound protection is the overall theme for Janvier’s mission statement. That’s why he named his company what he did: Okwaho means wolf in Mohawk.
“The wolf is the protector in my culture and I am of the wolf clan,” he says. “I’ve always been a protector.”

Certification
At the time Janvier sat down with Blue Line, he was just about to send out nine of his plates to a laboratory approved by the NIJ to be tested for the Level III protection level and the NIJ Standard-0101.06, “Ballistic Resistance of Body Armor,” which is a minimum performance standard developed in collaboration with the Office of Law Enforcement Standards (OLES) of the National Institute of Standards and Technology (NIST).

Testing should take about a week, he says. “If I’m approved, my company will be added to the NIJ list of companies for certified body armour…This is an important list because all the North American customers look at it.”

He plans to continue researching to get his company name up on government auction sites.

Down the road, he says he also wants to work with the Canadian government to create similar standards here on home turf — NIJ is the only body in North America testing body armour and providing standards, but it is U.S.- based.

Future plans
Though not currently in production, Janvier says he has 12 individual sales lined up already.

“We will have bulk order deals, too,” he adds. “ We have to keep in mind, for those in B.C, Alberta, Manitoba and now Nova Scotia, where there is legislation in place, you have be authorized to purchase these plates.”

He plans to expand his offerings in the future and include a groin plate, kidney plate, K9 armour and wants to look into his own line of riot shields.
Within four years, he hopes to have two locations, one being on the west coast, and his 10-year plan includes a location in the U.S.

“I want to be the industry leader in Canadian body armour. And I want to work with as many people as I can to help save lives.”

Body armour forged in the Great White North
Who else is manufacturing and selling body armour here on Canadian soil? What is Okwaho Ballistics-Protection up against?

Bill Geraghty, the owner of Body Armour Canada, has been selling ThorShield since 2016 and told Blue Line the products he sells are made in either the U.S., U.K. or Pakistan (gloves).

Similarly, Mark Yager, the general manager of Sigma Safety Corp., noted they have been working with American company Armor Express for about eight years.

“We don’t sell any armour that is made in Canada,” Yager said in an email. “Generally those manufacturers sell direct (some do a little through dealers) so there isn’t much room for a dealer like us to get involved in those.”

There is only one Canadian body armour manufacturer: Canadian Armour LTD., also known most popularly as Canarmor, which offers a full range of body armour, from bulletproof vests to ballistic helmets.

“I will be asking Canarmor if they want to supply my plates,” Janvier says. “I do want to work with them. Their main focus is body armour, whereas I do body armour and tactical kit. They’re a Canadian company and I think it’d be great to have both companies supporting each other.”

Canarmor carries out all of its processing and development in a warehouse in Keswick, Ont., and it also boasts a retail store/showroom in Richmond Hill, Ont. It began production in July 2010 as a small operation selling bulletproof vests to local companies and now it sells to “thousands of individuals and companies across the world.” (Focus Product Inc., out of Oakville, Ont., is Canarmor’s official distributor and reseller.)

Canarmor’s general manager, Robert Razgoev, notes they do have quite a few law enforcement clients, including the Royal Canadian Mounted Police and departments of the Canadian federal government. The company carries large amounts of its body armour in stock and is also able to do custom orders and designs upon request, he adds, thanks to highly-trained machinists.

As of September 2018, Razgoev says he is the only one providing made-in-Canada body armour but he welcomes new ideas from his fellow Canadians with an interest in the market and looks forward to seeing what lies ahead for more protective gear made here on home soil.