“Impressive” is the word Satyamoorthy Kabilan uses when he describes the officer who arrested the suspect in a van attack that saw 10 killed and 14 others injured — without firing his weapon. 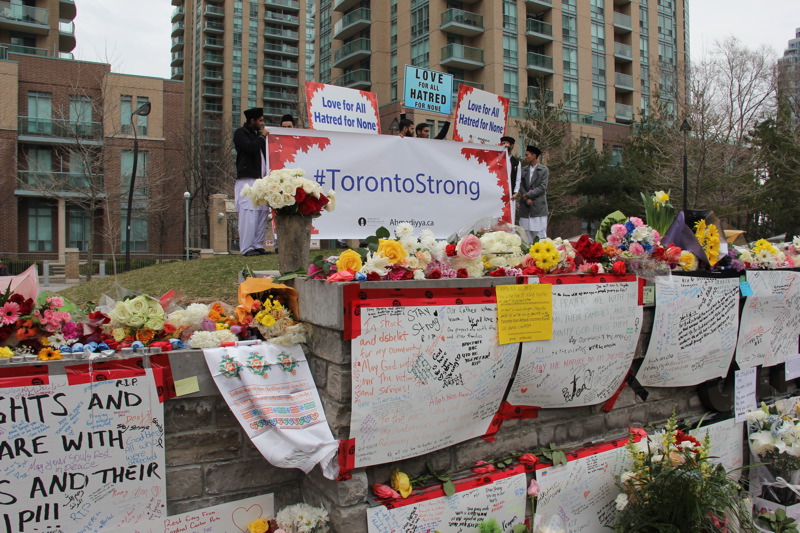 A memorial grows on the east side of the Yonge-Finch intersection to honour the victims of the April 23 attack. Photo: R. Francoeur

“The officer used very good judgment,” said Kabilan, the director of national security and strategic foresight at the Conference Board of Canada, in a phone interview with Blue Line the day after the tragic incident occurred on a busy strip of street in Toronto. “He should really be commended. It is very difficult in these situations to act so well… when you do not have the certainty the suspect does not have a weapon. This officer paid very close attention to this and didn’t see a gun. He was astute enough to notice this.”

The incident occurred at 1:25 p.m. on April 23. Eyewitnesses reported a white Ryder van mowing down pedestrians starting at the Yonge and Finch intersection in the northern part of the city — about a 10-minute drive from the Blue Line office.

“I must have seen about five, six people being resuscitated by bystanders and by ambulance drivers,” said Phil Zullo, one of the eyewitness, to Canadian Press. “It was awful. Brutal. Just people everywhere. People — shoes and shirts and ball caps on the floor, and some of the bodies were completely covered by blankets.”

Alek Minassian, 25, of Richmond Hill, Ont., has been charged with 10 counts of first-degree murder and 13 of attempted murder. Toronto Police announced at 3 p.m. on April 24 they anticipated a 14th count of attempted murder to be laid shortly, following investigations.

“This was a horrible, horrific scene,” Mike McCormack, the president of the Toronto Police Association, told Blue Line. “The officers were all amazing. It speaks to what we do in policing. We have a negative narrative but this shows truly what policing is about — the commitment of the first responder.”

The Toronto Police officer who arrested Minassian was attracting plenty of social media attention after a video capturing the act spread online.

Sources have identified him as Const. Ken Lam with the force’s 32 Division. McCormack noted he is a traffic constable who has been an officer for seven years.

In one of the videos posted online, a man stands by a damaged white rental van and points an object at the officer, asking to be killed. The officer refuses to shoot him, yelling repeatedly at him to get down and an arrest is later made with the man on the ground.

Toronto Police Chief Mark Saunders said in a news conference, it was a total of seven minutes from the time the first 911 call came in to the time the arrest was made.

The Ontario Provincial Police has also provided resources in looking after the scene, he said.

Saunders spoke to the officer who made the arrest and said he’s doing well and grateful for all the support.

“He expresses that he defaulted to his training… and as a result we had a successful outcome.”

McCormack has also spoke with that officer, commenting, “When you’re in confrontation with someone, it’s stressful enough; when you compound that with the horrible, horrible day of having 10 dead, it’s a lot to be a part of. It’s very overwhelming.”

Both Saunders and McCormack noted how an extremely high percentage of interactions with people with weapons end in de-escalation in Toronto — that’s what officers are trained to do.

Jessica Davis, a consultant and former intelligence analyst with a background in terrorism research, said her first reaction to seeing the videos of the arrest was: “That is a very professional arrest.”

At the same time, she said that is what Canadians expect of their police forces.

For Kabilan, this is a great example of a police officer doing whatever they can without taking out a firearm in an extremely difficult situation.

“However, we need to be careful and understand this is a unique situation and another officer may respond differently, legitimately so, in a different but similar situation,” Kabilan noted.

“This is a tragic event,” he continued. “But in the response, Toronto Police got so many things right.”

He pointed to the controlled way authorities released information, connected with others, such as Sunnybrook Hospital staff, and didn’t jump to conclusions — police announced a motive would not be discussed, as charges have been laid and the suspect in custody will go to trial.

In regards to motive, Kabilan also noted that speculation is harmful and applauded Chief Saunders for doing “very well” in that respect and being careful in his wording.

Saunders mentioned there was no national security connection to the incident in a previous press conference.

“The reality is: any large metropolitan area has the potential for this to happen… there is a large concentration of people and you get more trucks going through the city than a small town, for example,” Kabilan went on to state. “The question is what can we do to protect pedestrians and we’re never going to be able to make it a zero-risk situation.”

Detecting and preventing this type of attack is really challenging for law enforcement and security services, Davis agreed.

“We’re not going to be able to prevent these type of incidents 100 per cent but we can learn from them,” she said. “And we do that by reviewing.”