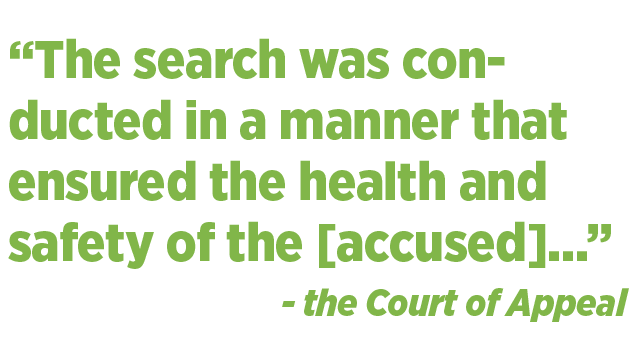 A strip search performed in a mall parking lot was reasonable in the circumstances and the cocaine found in an accused’s groin area was admissible as evidence. In R. v. Byfield, 2020 ONCA 515, plain clothed police officers conducted surveillance on a house after receiving a confidential tip from an untested informer that an individual was selling drugs from it. A vehicle registered to the accused, who was known to an officer from a previous drug investigation, arrived at the house and parked in its driveway. Police saw a man leave the house and get into the passenger seat of Byfield’s vehicle. The driver and the passenger then switched seats and the car was driven to a nearby plaza where it parked. Within minutes, a male got out of a green car and entered Byfield’s car in the rear passenger seat on the driver’s side. After about a minute, the male got out of Byfield’s car and returned to the green car.

Believing they had witnessed a drug transaction, the police stopped Byfield’s car as it was being driven out of the parking lot and arrested both of its occupants, the driver and Byfield, who was in the front passenger seat. Byfield was patted down incident to his arrest but nothing was found.

A uniformed officer arrived to transport Byfield to the police station, which was located about four minutes away. The transporting officer patted Byfield down again for safety reasons – for the officer, the public and for Byfield – and to prevent the destruction of evidence. During this second pat down, the officer felt a large, hard object in Byfield’s groin area. Believing it was “non-anatomical,” the officer asked Byfield what it was. Byfield replied, “my dick.”

Investigating the bulky object further, an officer pulled out the waistband of Byfield’s pants and saw he was wearing a red onesie (also known as long underwear). The officer then pulled out the underwear and saw a large baggie, which he removed. This baggie contained four smaller individual bags of cocaine weighing a total of 184 grams.

This search lasted 15-20 seconds according to one officer and less than a minute according to another. Byfield’s genitals were never exposed and none of his clothing was removed. Two male officers, one on each side of Byfield, conducted the search at the back of a police car adjacent to a large snowbank where no civilians saw it. Byfield was charged with possessing cocaine for the purpose of trafficking.

Before his trial commenced in the Ontario Superior Court of Justice, Byfield brought a Charter motion alleging his rights, under ss. 8 and 9 were violated and the evidence ought to be excluded under s. 24(2). The judge, however, dismissed Byfield’s application.

First, the judge found the police had the requisite reasonable grounds to believe Byfield had committed a drug trafficking offence and could be arrested without a warrant under s. 495(1)(a) of the Criminal Code. Second, the judge held the search, which he recognized was a “strip search” despite one of the searching officers’ contrary view, was reasonably conducted as an incident to arrest. The judge accepted the concerns offered by police that the search was conducted for officer safety reasons and to secure or prevent the destruction of evidence.

As for the manner in which the roadside search was conducted, the judge found it was reasonable: the health and safety of those involved was ensured; it was minimally intrusive, done as quickly as possible and only involved a brief visual inspection of the underwear area (Byfield’s waistband and underwear were pulled out briefly and minimally); the number of officers involved was appropriate and they were of the same gender; Byfield’s genitals or groin area was never exposed, he was not required to pull down his pants and none of his clothing was removed; no member of the public witnessed any part of the search; no supervisory authorization was necessary in the circumstances; the police had reasonable grounds Byfield was trafficking in drugs; and there was no evidence that the search was aggressive or humiliating.

Byfield was convicted of possessing cocaine for the purpose of trafficking and sentenced to 24 months’ imprisonment, less pre-sentence custody, plus other ancillary orders.

Byfield then challenged his conviction before the Ontario Court of Appeal arguing, in part, that the judge erred in concluding that the strip search following his arrest was unreasonable, thus infringing his right under s. 8 of the Charter.

The Court of Appeal upheld the lower court ruling. First, the second pat down was appropriate. Second, even though the searching officer mistakenly believed that the mere “rearrangement” of clothing did not constitute a strip search, the motion judge did not err in ultimately concluding that the strip search was reasonable in the circumstances.

“The search was conducted in a manner that ensured the health and safety of the [accused],” highlighted the Court of Appeal. “It involved a brief (15 seconds to a minute) visual inspection of the [accused’s] underwear area; the searching officer was the same gender as the [accused]; the [accused’s] genitals were never exposed; no articles of clothing were removed; no member of the public witnessed any part of the details of the search because it was conducted between a police cruiser and a large snowbank; and there was no evidence to suggest that the search was gratuitously aggressive or humiliating.”

“Given his discovery of the unknown object in [Byfield’s] groin area, further investigation was reasonable and necessary,” said the Appeal Court. “We disagree with [Byfield’s] submission that, because the police station was only four minutes away, the strip search could have waited until then. The strip search was necessary to ensure the safety of all concerned … during this journey to the police station, even if that journey was to be brief.”

Since there were no Charter breaches, there was no need to consider s. 24(2). Byfield’s appeal was dismissed.