Is this your next pistol?

A good sidearm should last the career of a law enforcement officer. If you were with the RCMP for 30 years or fewer, that pistol is likely the Smith & Wesson Model 5946 semi-automatic. Now, after years of rumours, the RCMP is poised to select their next duty pistol.

The Smith & Wesson 5946 semi-automatic performed yeoman service. Although heavy, it was reliable, equipped with clear sights and had a smooth double-action-only trigger that nearly duplicated the pull weight and trigger stroke of the previous Smith & Wesson revolver.

But replacement was inevitable. The last batch of Smith & Wesson’s generation 3 pistols came off the assembly line in 2013 as market desire plunged for heavy, all-metal, hammer-fired duty pistols.

The RCMP has released a “Letter of Interest” with the complete specifications of their desired new pistol. There are some interesting requirements and some surprising elements that may vault the RCMP ahead of nearly every other law enforcement agency in Canada.

It was no surprise that the RCMP would be seeking out a new all-matte-black pistol with a corrosion-resistant barrel and slide, polymer frame and a grip design that can accommodate various hand grip sizes. What is surprising is that the RCMP will also be equipping all duty pistols with a combat-tested micro red dot sight system (MRDS) as well as the traditional iron sights.

Even more surprising is that the RCMP is finally doing away with the questionable design “feature” of a magazine disconnect.

Here is a short summary of the technical requirements for their new pistol, as specified in the Letter of Interest: 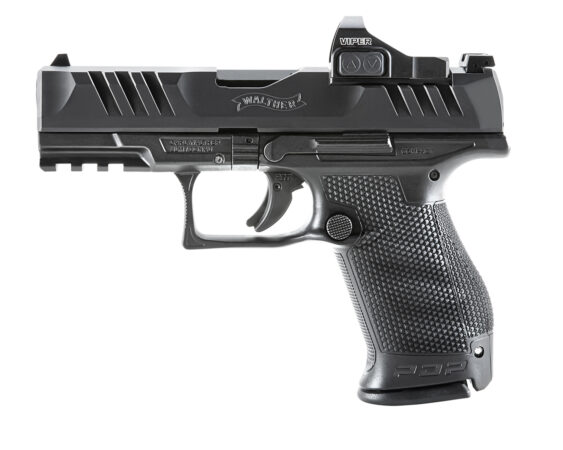 Striker-fired pistols are a variation on the double-action-only trigger function, in that every shot requires the same trigger pull. The pistol has the basic simplicity of a good revolver, with point-and-shoot capability, as well as an absence of levers, switches, buttons or decocking devices that serve to get in the way during dynamic life-threatening situations. All three safeties are redundant and internal to the design.

So, who are the leading contenders?

Glock will obviously be considered, with 65 per cent of the police market in Canada and FBI and Ontario Provincial Police both recently adopting the Glock 17M.

Smith & Wesson makes a version of their highly-regarded M&P pistol with provision for a red dot sight.

Walther Arms has the new Performance Duty Pistol (PDP) and Fabrique Nationale has the FN 509 pistol; both of which coincidentally match the desired requirements of the RCMP almost exactly.

Sig Sauer will unfortunately be out of the running with their P320 pistol because it curiously lacks the built-in trigger safety of other striker-fired pistols on the market.

It is good to see the RCMP acknowledging that most striker-fired pistols must be disassembled by first relaxing tension on the trigger mechanism by pulling the trigger on an empty chamber. Simply teaching every officer the PROVE safety checking procedure will make this a non-issue.

Another non-issue will be the magazine disconnect of the 5946. Not only would it prevent a single round from being fired if the magazine is broken or drops out in the middle of a gunfight, but it also complicated any dry-fire exercises. Dry-fire is an essential component in transitioning to micro red dot sights, and the RCMP has seen the future. If they can fast-track their testing and selection process, they have a chance to leap ahead with the latest technology in police duty sidearms for the 21st century.

So which pistol are we predicting that RCMP officers will be carrying on their hip a few short years from now? Well, let’s just say that the late Ian Fleming would likely approve of Q-Branch of the British Secret Service replacing his fictional James Bond character’s much beloved Walther PPK with the new Walther PDP.

Dave Brown is Blue Line’s firearms and police vehicle contributor, as well as a Best Dressed Police Vehicle Awards judge. He is a tactical firearms trainer and consultant based in Winnipeg. He can be reached at Dave.Brown@northwestlaw.ca.

Editor’s note: The views and thoughts expressed in this article are those of the author.