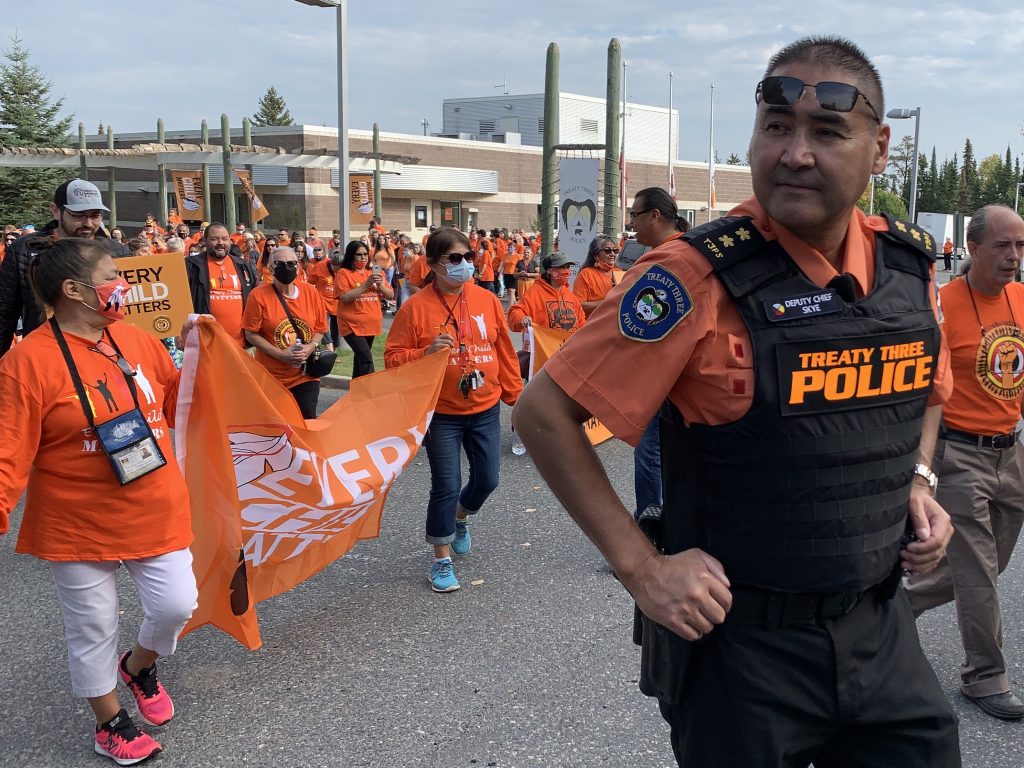 Indigenous policing for the people, by the people

“The police descended into our community searching for the missing child. Because I knew what he looked like, I was given permission by my parents to ride along with a Toronto Police officer during the search. I could clearly see the concern that he and the other officers had for my friend. As it turns out, my friend had just gone to another friend’s house for dinner and forgot to tell his parents, so he was fine,” Liu said. “But because of that positive interaction, and my perception changing, from that point forward I knew I wanted to be just like the officer I met.”

Liu was driven by his desire to help and serve his community, and it still drives him to this day.

The road to Police Chief

Liu started his policing career with the Ottawa Police Service (OPS) in 1986. At that time, the OPS had approximately 680 officers, of which 99.9 per cent were six-foot-tall, white males. There were only approximately six females. “Up until 1985, there was a minimum height requirement at the OPS. Males had to be over six feet tall, and females had to be over five feet, eight inches. In 1985, there was an Ontario Human Rights decision made that recognized that certain cultural or ethnic groups traditionally would not be able to meet that height requirement. And so, in 1985, the minimum height requirement in the City of Ottawa was removed.”

In 1986, Liu was the first Asian police officer of the OPS, and the first male officer hired under the height of six feet.

Early in Liu’s career, he had the opportunity to work as the Ottawa Police Race Relations officer, which led him to working with many of the First Nations organizations that were housed in Ottawa. “Ottawa has the largest Inuit population outside of the North. That daily interaction with the different Indigenous communities and organizations was something that I always wanted to continue to expand, and to use my experience to give back and serve those communities,” he said. “As my career progressed, it wasn’t until I was near retirement from municipal policing – and by that time I had been a police chief of two different organizations, the Gananoque Police Service and the Cobourg Police Service – that I was approached by Treaty Three Police to lead their police service through the anticipated changes in provincial legislation that were to come.” From his time working with Indigenous populations in the OPS, to his time now as the Chief of the Treaty Three Police Service (T3PS), Liu has come full circle.

The value of Indigenous policing

Within the Treaty #3 Territory there are 28 First Nation communities, and the Treaty Three Police Service (T3PS) covers 23 communities, spanning an area of 55,000 square miles.

“Our Police Service motto is Gizhaadigeziwang Oko Wiiji’idiwinan, which is Ojibwe for ‘Policing for the people, by the people’. At the T3PS, 75 per cent of our officers are Indigenous, or visible minorities,” said Chief Kai Liu. Thirty-five per cent of the T3PS is also made up of female officers, which is approximately 10 per cent over the national average.

One of the challenges that the Treaty Three communities face is not having access to regular services that are enjoyed by larger municipalities. “The Treaty Three communities are located in northwestern Ontario, and we don’t have many other agencies to help our community members. With a much smaller social safety net available within our Indigenous communities, our T3PS members are left filling in the gaps,” Liu stated.

Sometimes, to make sure the individual gets the help they need, officers will drive 600 to 700 kilometres to ensure they are taken care of. “Why do we do it? Because that’s what First Nations policing is. We see the citizens and residents of our Treaty Three communities as family members, and that is how they’ll be treated,” he said. “One such incident involved a female who was walking along a rural highway in early spring, and she didn’t have any shoes on. The officers picked her up, drove her an hour and a half to the closest Walmart and bought her a pair of shoes. Then, because the female wasn’t feeling well, the officers took her to the hospital. These kinds of occurrences happen regularly, and it’s because of the cultural makeup of our officers that we’re able to properly attend to our citizens.”

We aim to provide a professional, dedicated and culturally responsive police service that is sensitive to the traditions and cultures of the communities we serve.

For Liu, the real value of Indigenous policing came to the forefront during the COVID-19 pandemic. “In a non-pandemic world, the 23 communities that we serve are usually under-resourced, with poor housing conditions. When you add the pandemic to that, and you have multigenerational families all residing in a small house, the risk was if one person was infected, then the whole family would be infected,” said Liu. “Band Chiefs and Councils were proactive protecting their residents by closing their communities the outside.” The members of the T3PS provided security at the checkpoints to help support the people who were working there.

“During this pandemic, there was one community that had an outbreak, which resulted in essentially the whole community being quarantined. Our officers took on the additional role of delivering food and delivering and stacking firewood because everyone was asked to stay inside their houses during that time. Our officers took on those supporting roles even when they were off duty. That allowed the community to address the outbreak and significantly reduce the positive cases.”

During the 2021 forest fire season, one of the Treaty Three communities had to be evacuated to Winnipeg and London, Ont. “During the evacuation, the T3PS officers were carrying elderly members to the buses, and making sure everyone got out to the airport safely,” said Liu. “Now, imagine a community that needs to evacuate, but they have to leave their animals behind. Our officers were in that community, feeding dogs and cats, giving them water, and making sure everything was taken care of.”

The mission of Indigenous policing

One of the most important aspects of Indigenous policing is working in partnership with the First Nations communities. “At the T3PS, we work with our Treaty #3 nations and we aim to provide a professional, dedicated and culturally responsive police service that is sensitive to the traditions and cultures of the communities we serve,” Liu said. “One of the ways we remain culturally sensitive and aware is by recognizing the Treaty Three traditions, customs and ceremonies that occur within the communities. We are guided by what we call ‘Grandfather Teachings’.”

Through Liu’s policing experience in municipalities like Ottawa, Cobourg and Gananoque, he learned that religion plays a large role in many citizens’ lives. “For Treaty Three communities, these cultures, traditions, Grandfather Teachings and sacred items play the same kind of role. As an Indigenous police service, we have several sacred items, including our drum, our pipe, and our eagle staff, which provide us and our members guidance and support.”

On Sept. 30, Canada federally recognized the first Truth and Reconciliation Day. “This came as a result of generations of people essentially trying to kill the Indian in the child. A lot of the ceremonies, traditions and customs that are being practiced now were at one time against the law, banned and prohibited. Therefore, it is so important to embrace these traditions now and make sure they are not lost,” said Liu.

On the first National Day of Truth and Reconciliation, the Treaty Three police donned orange shirts and orange police logos. “Where our police headquarter is located is unfortunately near the former Cecilia Jeffrey Indian Residential School site. For that reason, we know we are surrounded by unmarked graves of children that attended that school. So, on Sept. 30, led by residential school survivors, Grand Council Treaty #3 held an honour walk that started from the former school site and stopped at our police station and held a large ceremony in front of those unmarked graves.”

In 2019, the Conservatives took over the Ontario provincial government, and introduced Bill 68: the Community Safety and Policing Act. This bill is expected to replace the current Police Services Act in 2022.

The new act has also included: the need to be responsive to the unique histories and cultures of First Nation, Inuit and Métis communities; the need to ensure that all parts of Ontario, including First Nation reserves, receive equitable levels of policing.

“That last guiding principle is very important. Since their inception, First Nation police services have been chronically underfunded. In municipalities like Ottawa, if someone were to call 911 for an emergency, on average, it would take anywhere from four to seven minutes for officers to respond. In our Treaty Three community, because we are so chronically under-resourced and we span such a large territory, it would take anywhere from one to one and a half hours for an officer to respond. We don’t have the resources to assign dedicated members to each of the communities we serve.” The T3PS has 106 members to cover 55,000 square miles.

“Under the current Police Services Act, municipal police services are able to go to ‘arbitration’. This allows them to go in front of an arbitrator and argue as to why they require additional funding,” said Liu. “Currently, for First Nations policing, it’s a take-it-or-leave-it situation, and there is no room for negotiations. Under the new act, Indigenous police services can go to binding arbitration, which provides the mechanism for First Nation communities to ask for the appropriate resources.”

First Nations constables are selected on the same criteria as every other police officer in the province of Ontario. “The criteria to hire a Toronto Police officer, an OPP officer or an Ottawa Police officer are all the same. All members must attend the Ontario Police College. Where we differ from municipal police services is that our officers receive an additional six weeks of training with our provincial counterparts. Once our officers are finished at the Ontario Police College, they continue their training with the OPP. When they finish their training and return to the T3PS, they receive specific cultural trainings that have to do with the different nuances of policing within the First Nation communities where they will be serving.”