Dean LaGrange became the eighth chief of the Camrose Police Service in central Alberta in July 2019. He brought with him 26 years of experience with the Calgary Police Service, where he rose to the rank of inspector, followed by an 18-month term with the RCMP in Red Deer, Alta., where he held the position of inspector of operational support. He discusses more about how those experiences shaped him and his plans for Camrose with Blue Line. 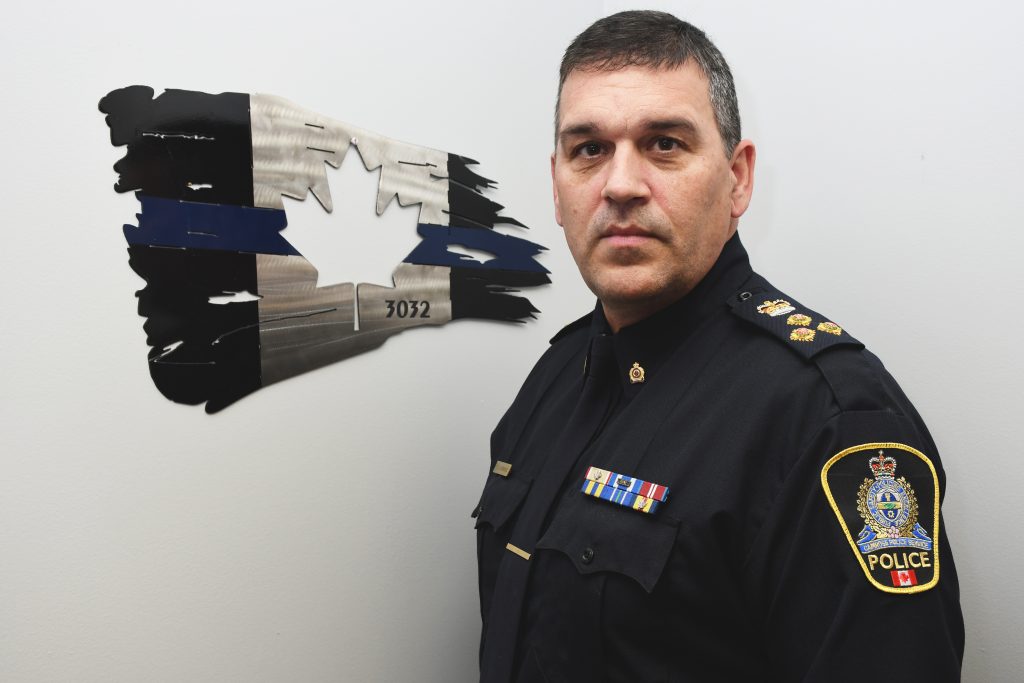 Q: Why did you pursue a career in law enforcement?

I am a third-generation police officer. My grandfather was with the Regina City Police in the 30s and 40s, and my father was an RCMP officer in the 50s and 60s. It kind of runs in the blood, I guess, and policing is often referred to as the “family business.” Both of my sons are in law enforcement and my daughter is a 911 dispatcher too, so it has some merit.

Q: How did your career evolve over time?

I joined the Calgary Police Service (CPS) in 1992, a young kid from rural Alberta. After six years on the street in various districts, I went to the Traffic Section. Growing up watching Ponch and Jon from the TV show “CHiPs,” I had to experience the police motorcycles. After that I went to the Strike Force Unit (SFU) and worked surveillance for a few years before returning to the street, where I was promoted to sergeant in 2005. With stints in Major Events & Emergency Management and running a team out in District “4,” I was promoted to staff sergeant and placed in District “2.”

A few years later, with a stop in the Office of the Chief as the executive officer for the deputy chief of field operations, I was promoted to inspector in 2011. I took command of the Traffic Section, which included a NATO (North Atlantic Treaty Organization) mission for a year in Afghanistan. This was done through IPOB (International Policing Operations Branch), managed by the RCMP.

I then took command as the inspector of District “2” for a couple of years before ending up as a duty inspector. I retired in 2017, joined the RCMP at the rank of inspector four days after retiring and was posted to Red Deer as the operations support officer. My plan was to stay with the Mounties for the rest of my law enforcement career, when an unexpected opportunity here in Camrose presented itself. It’s been a very rewarding career.

Q: What has been your most memorable moment in policing?

I have enjoyed my career so much that it’s difficult to nail down a specific “moment.” The opportunity to experience a year-long mission, assisting in the training of the Afghan National Police, certainly stands out as unique and memorable.

Q: What has been a particularly challenging part of your career?

This is a tough question to answer. While we all have bad days, they were few and far between. One of the biggest challenges/decisions I struggled with, however, was whether the time was right to retire from the organization that was such a big part of my life, CPS. I have always believed in progress and change, so having the opportunity to step outside of my comfort zone and join the RCMP was a big decision. It was challenging to learn new processes and to step into a different agency where I had no history or organizational reputation. I was made to feel very welcome and everyone within the RCMP made the transition a pleasant experience. The RCMP is a great organization, steeped in history and tradition, and I am grateful to have been a part of that, short as it may have been.

Q: How did your former experiences prepare you for this role as chief of police?

Having the opportunity to work in two different organizations definitely helped prepare me. Camrose is a smaller agency that works quite closely with the local RCMP in the surrounding communities. Having knowledge of RCMP policy and procedures, as well as personal relationships with many RCMP colleagues around the province, was a distinct bonus. My time in Calgary, specifically as the deputy chief’s executive officer, with the exposure to the police commission and the “business” part of policing was very beneficial as well.

Q: What is something you have enjoyed about getting to know Camrose?

I have thoroughly enjoyed the smaller city and more intimate environment. Having experienced big city policing with Calgary, and the RCMP to a lesser degree, this has been my first exposure to a smaller centre. The two-minute drive to work, the personal relationships developed with members of the police service and the community at large really appeals to me at this stage of my career. Having the ability to effect change directly and being able to be “hands-on” is quite rewarding.

Q: What is one thing you hope to enhance at the Camrose Police Service?

The Camrose Police Service has very good equipment, resources and training. Something I discovered with my one-on-one conversations with members was a desire for expanded opportunities outside of the organization — like with ALERT (Alberta Law Enforcement Response Team), IPOB missions, JFOs, (Joint Forces Operations), etc. These opportunities are excellent ways to expand skillsets and experiences that not only benefit individuals, but the organization and the community itself. I want to find ways to provide these opportunities without impacting staffing levels negatively, which is always a challenge.

I am also in the process of modernizing some elements of the police service, including designing new dress uniforms, developing new badges and creating a more effective, modern work environment that our staff will take renewed pride in belonging to.

Q: How does technology play into the service’s future?

The Camrose Police Service is a primary 911 PSAP (Public Safety Answering Point) and so we are focusing on the mandated NextGen 911 upgrades over the next couple of years. We also have to ensure we have resources to invest in the AFRCCS (Alberta First Responders Radio Communications System) provincial radio system in the coming years.

Q: What is your advice to others with dreams of climbing the ladder in law enforcement?

Be yourself, don’t change. Be kind and humble. If that, combined with your work ethic, doesn’t get you promoted, you don’t want it anyway. Just because you have something on your sleeve or shoulder doesn’t define what type of person you are or how successful you have been. I have found that “people skills” are far more valuable than other abilities and talents you may have acquired.

Q: Where do you see yourself in 10 years?

I’m not an overly complicated guy. I want to build my retirement home with my wife out in the quiet country and bounce my grandkids on my knee. Getting away from the bulk of the Canadian winters is also appealing. I can see myself reading the papers, shaking my head at what the men and women in law enforcement will be dealing with. Regardless, after several decades in law enforcement, I appreciate the special bond police officers have, and I look forward to running into other retirees, reminiscing about when we were young and on the frontlines. It goes by so very quickly — enjoy it.