Features Off the Shelf
Cops in Kabul by William C. Malone 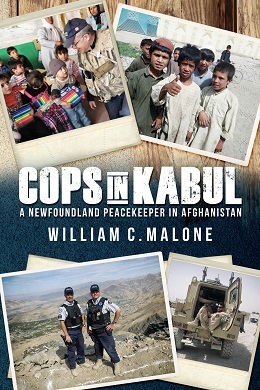 Cops in Kabul follows Malone’s one-year deployment to Afghanistan as the deputy Canadian police commander in Kabul, beginning in May 2011. Malone commanded Canadian police who were part of the NATO Training Mission, which was designed to develop the Afghanistan National Police into a functional, democratically-modeled police service.

Malone is no stranger to international policing, having served in Africa and Haiti, and he relies upon those experiences regularly in dealing with the political and foreign service efforts of the other contributing partner countries, whose good intentions are respected but tempered by Malone’s pragmatic operational experience.

Two themes pervade Cops in Kabul. The first is Malone’s commitment to the development of a “police assessment tool,” one that would accurately reflect a civil law enforcement philosophy rather than a clumsily applied military accounting of ground pacified and ammunition expended. In this book, we frequently see the allied military presence acting as an impediment to the policing efforts.

The author’s second focus is the responsibility he felt toward the health and safety of the police under his authority in this dangerous part of the world. From personally checking on the welfare of a Canadian police officer after a police station bomb attack, to ensuring the contingent’s contact with home and family was secure, Malone carried out his duty to both mission and personnel with remarkable dedication.

Cops in Kabul is a thoughtful and stimulating read for anyone interested in Canada’s international policing efforts. It forces us to ask the hard questions about why international policing does not live up to its promise of creating lasting civil policing change. From what Malone has experienced, and from what experts in the field of international policing appear to suggest, we must conclude that we cannot hope to succeed in the long term unless we first have answers to three questions before a decision to deploy police is made: