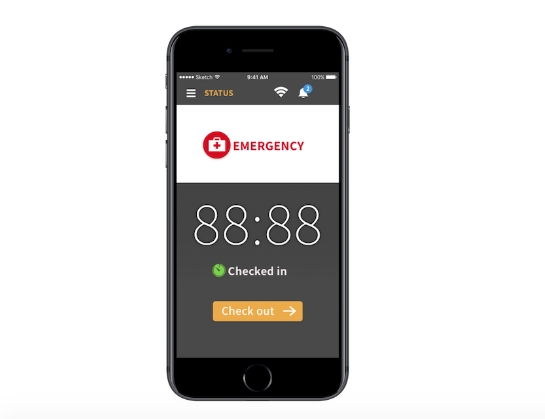 Hope Outreach, a non-profit group that provides support to homeless and exploited women in Kelowna, is partnering with the makers of YodelMe to launch a pilot project to make the monitoring app available to sex workers and other vulnerable women in the Okanagan.

“What I can see it do is saving some lives, and that’s what I’m all about,” said Angie Lohr, president and co-founder of Hope Outreach.

YodelMe uses Wi-Fi, cellular and satellite technology to monitor a user by having them check in and out at set time periods. If a user doesn’t check in when they’re supposed to, a reminder is sent. If it’s ignored, the app sends a distress message to pre-programmed contacts with the user’s location.

Greg ter Wolbeek, business manager for YodelMe, said he and founder Aaron Kilback contacted the outreach group after reading about it in a local newspaper.

“It just struck me that hang on, this is developed for lone workers, essentially they are lone workers, so perhaps we can help them,” he said.

Lohr said she and the women Hope Outreach works with were excited by the offer to help find a solution to the violence they experience.

“This stuff happens every day and so I guess where I get a little annoyed is we wait for some tragedy to happen to focus any light on it,” she said. “We never really focus on who is picking these women up, why are they out there and what are we going to do to make them safe.”

Details of the pilot project are still in discussion, but Lohr said she hopes to gather groups of 10 women from Kelowna, Vernon and Penticton to begin trying out the app in December. The pilot project is also looking at establishing a neighbourhood watch-type group among sex workers for an added level of security, ter Wolbeek said.

“The idea is to create a Yodel community so people can communicate with one another so if you have an emergency that you’re in, you can see who in your Yodel community is nearby to help you,” said ter Wolbeek. “A nice way to look at it is this app is linking our virtual communities with a real life community.”

Cecilia Benoit, a University of Victoria sociology professor researching sex work in Canada, said the app has potential to give women added security, but the challenge is users need someone they trust in their lives or have trust in the police to be on the receiving end of emergency messages.

“The most vulnerable will be the least likely to have a trustworthy person,” she said.

A more meaningful approach in the longer term would for Hope Outreach or other organizations to use the introduction of the app to connect users with resources, such as housing and employment programs, Benoit said.

“It’s a practical tool that can be helpful but I don’t think it changes the situation. They still need the money, they are still going into these situations,” she said. “When they find a safe home, when they find a support system … they can start building more safety in their lives.”

Lohr said the business of sex work is never going to go away as long as there is a demand and there are vulnerable women with no other alternative.

Until there are more economic opportunities, housing, treatment for addictions and solutions for the other challenges women experience, Lohr said the app may at least help with their safety.

Related
Was police chase that caused Sarah Beckett’s death a crime?
Mountie enforcing distracted driving rules struck in hit and run
Greyhound bus route on B.C.’s Highway of Tears one of five that could be axed
British Columbia boosts drug checking service in fight against overdoses