ABBOTSFORD, B.C. — A police officer who died in the line of duty in British Columbia was remembered Tuesday for his bravery in protecting others and his community commitment in the work he did with children.

Abbotsford police say Const. John Davidson, who was 53, had been an officer for 24 years and spent the last 11 years with the department in the Lower Mainland.

Davidson died after an exchange of gunfire between a suspect and police who were responding to a report of a possible stolen vehicle and shots fired at members of the public.

Rich said Davidson followed his training in dealing with an active shooter, giving his life on Monday to protect the public.

Police say Oscar Arfmann, 65, of Alberta has been charged with first-degree murder.

Cpl. Frank Jang of the Integrated Homicide Investigation Team said Arfmann is in hospital receiving treatment for injuries he received during the incident and is conscious.

The civilian agency that investigates police actions resulting in serious harm or death has said it’s believed the suspect who was arrested was shot.

Arfmann does not have a criminal record and had a firearms license until 2015, Jang told a news conference.

He said investigators are working to retrace Arfmann’s steps in the days leading up to the shooting.

One person who used to know him was Hope Arfmann, 63, who married Oscar when she was just 18. The couple had a son together, but she said the marriage lasted less than three years because Oscar was emotionally abusive.

They lived in the small hamlet of Sunnybrook, Alta., and also on a farm near Millet, where she said he would hunt small rodents and birds.

“The birds deserted the area, the squirrels, the gophers — anybody and everybody spread the word: stay away from that area,” she said.

She said their split was tense and she suffered a medical condition that caused blackouts when she felt distressed.

“I wanted to leave and he decided to keep me from doing that,” she explained. “I had been cutting up a roast at the table to make him a last lunch. And he says, ‘well, you ain’t going unless I let you go, and I ain’t letting you go.’ And that’s all I heard. When my sensibility came back, there was a knife in the wall.”

However, she said the incident had been enough to bring about a change of mind on his part. She said in no time at all, he had packed up her belongings and driven her into Edmonton.

After their split, their contact was limited, though they had a son together who she later gave up for adoption. Hope said after their divorce was made final by a Wetaskiwin court in the summer of 1975, Oscar married a woman named Patricia.

“I heard by the bye that they were still like honeymooners after 40 years,” she said. “I was tickled pink. He married the right person the second time. For some reason, they clicked.”

Hope met Patricia once when Oscar came by to visit their son and take him home for a weekend visit. She said when the little boy came home, he had a bunch of toys.

“Oscar never, ever bought a thing for my son, so I’m assuming it was to impress Patricia about what a good person he is,” she said.

According to an obituary posted by a funeral home in Bonnyville, Alta., Patricia Arfmann died in 2013.

“I’m sure Oscar took it quite hard,” said Hope. “The only thing that he really loved was Patricia.”

Jang said the killing of a police officer is automatically treated as first-degree murder.

Davidson began his career in the United Kingdom in 1993 working for the police in Northumbria before moving to British Columbia in 2006.

He is survived by his wife and three adult children.

Davidson worked in the patrol, youth squad and traffic sections in Abbotsford and was active in the community, cycling in September in the Tour de Valley Cops for Cancer ride. His fundraising page said the native of Scotland loved soccer and rugby, keeping fit and being outdoors.

Rich described how Davidson spearheaded a crash prevention program where he spoke to high school students alongside a girl who had lost a friend in a car accident and discussed how graduating classes could organize their end-of-year celebrations to prevent impaired driving.

He said the last time he shook Davidson’s hand was in September after the ride around the Fraser Valley for youth cancer research.

“We have lost John and nothing can change that. John died doing what we asked him to do,” said Rich, speaking in front of the Abbotsford police headquarters where a wall of flowers, candles and stuffed animals had grown outside the front entrance.

Mayor Henry Braun said the community is in disbelief and people have lots of questions but the first priority is to support the fallen officer’s family.

“We just want to express our heartfelt sorrow to the family. We all have heavy hearts but they are carrying a much bigger burden than we are,” he said.

Davidson had an impact on students in the community thanks to his work as a school liaison officer, Braun added.

“There’s going to be some schools, some kids, when they find out who this is who are going to be grieving as well. So we need to surround our kids as well because they’ll have a tough time grappling with this, because he was greatly, greatly loved in our schools.”

On Monday, Rich said officers were called about a possible stolen vehicle in the parking lot of a shopping complex at about 11:30 a.m.

The caller hemmed in the suspect’s vehicle while waiting for police to arrive, Rich said. The suspect emerged from the vehicle and began shooting at the caller and others, he said.

When police officers arrived, they attempted to arrest the suspect, who fled in the vehicle. Rich said police pursued him to an intersection where he was apprehended and taken to hospital.

The B.C. Law Enforcement Memorial lists only one other Abbotsford member in its online registry of officers who died in the line of duty. Const. John Goyer died in 2006 from complications sustained while responding to a call involving a domestic dispute five years earlier. 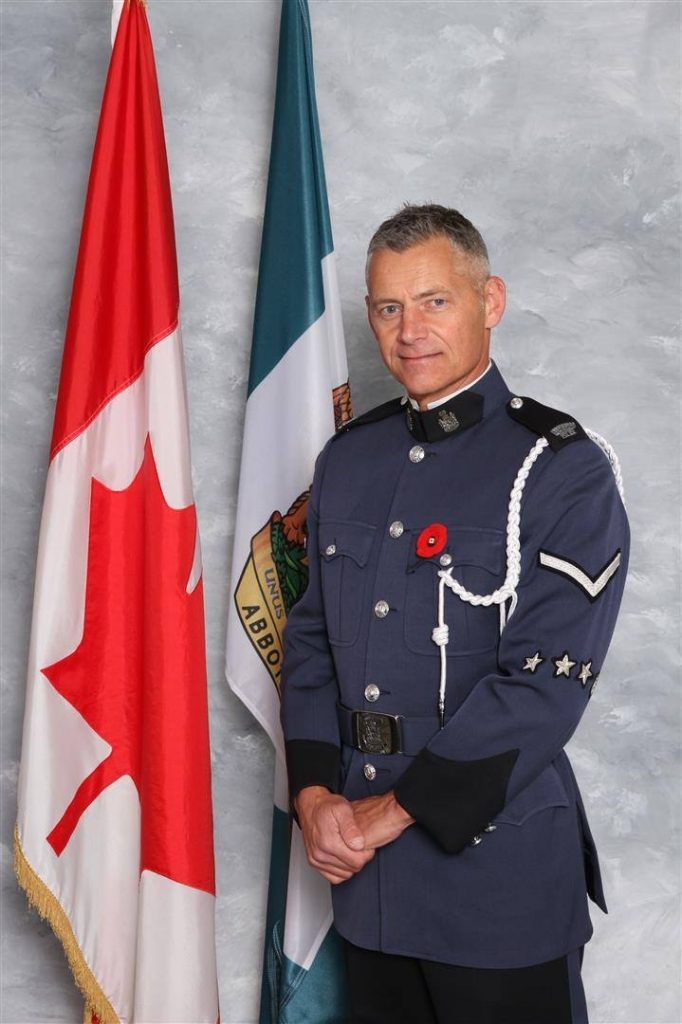