As a 28-year member of the Vancouver Police Department (VPD), Constable Cinda Michael is a leader in her community and a leader in policing. She was selected as the recipient of the 2017 Blue Line Police Leadership Award. Constable Michael is recognized internationally for her skills and experience in crisis negotiation. She has dedicated herself to the field and today is one of Canada’s most accomplished crisis negotiators. 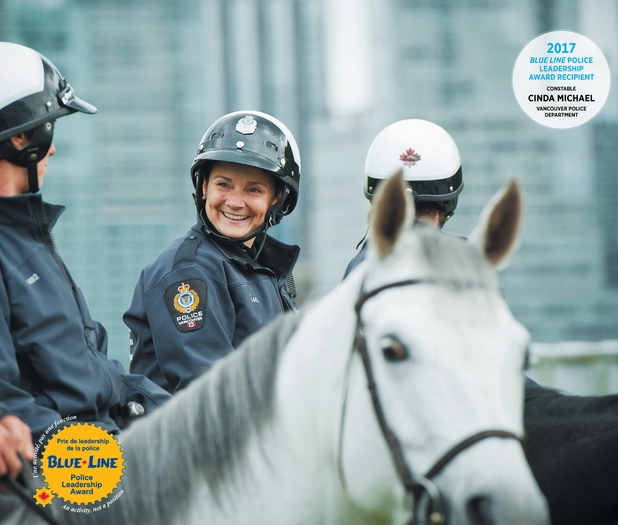 Many in policing will acknowledge that one of the most serious types of incidents a police officer can encounter is where the suspect is in a heightened emotional state. These situations pose the greatest risk to police officers and the general public, and have the potential to turn violent. Constable Michael has faced these situations countless times and thanks to her skills and abilities, she has saved many lives. In fact, she has personally responded to more than 250 critical incidents. Some of these incidents are high profile and have been reported on extensively.

For example, in November 2010, Constable Michael was part of a team that resolved an incident where a three-year-old child was taken hostage at a Vancouver community centre by a subject armed with a large knife. The standoff lasted for eight hours with intense negotiations, and the child was ultimately rescued by Emergency Response Team members. As an accomplished negotiator, Constable Michael is able to recognize when a tactical intervention is appropriate.

That said, a great many critical incidents are resolved through well-executed negotiations on the part of people like Constable Michael. It’s work that the public may not always hear about. In 2011, Constable Michael responded to an incident where a man threatened to jump off of a five-storey building. The standoff went on for hours in the boiling sun as the temperature on the tar roof climbed above 30 degrees Celsius. After about eight hours of patient and exhausting negotiating, the incident was brought to a safe resolution.

Constable Michael has been a visionary in crisis negotiation and has spent 17 years of her career dedicated specifically to this field. She has been instrumental in the progression and development of the Crisis Negotiator program at the VPD — a program that is now regarded very highly throughout the world.

Constable Michael joined the VPD in 1989 and in early 2000, she joined the VPD’s Crisis Negotiation team. After five years on the team, she took on the role of lead negotiator liaison officer. This move elevated her role during a crisis and gave her a spot in the “command triangle,” where she reported directly to a critical incident commander during any type of critical incident. She excelled in her new role but also had a vision for what crisis negotiation at the VPD could look like and how it could improve further. She put together a business plan for the creation of a new role: the VPD’s first full-time negotiator coordinator. And then, in 2010, she assumed this new, challenging role.

Constable Michael has played a key role in setting up the crisis negotiation function at the VPD for success, not only through developing its structure, but also by ensuring the VPD trained the right people at the right time to take on the important roles in crisis negotiation. She developed a two-week crisis negotiator selection course in 2012 — another first for the department. All potential negotiators must first excel in a two-week basic negotiator course before they are considered for the team. It’s a challenging field that requires a specific skill set and this course has been a valuable tool in identifying the best possible candidates for training in crisis negotiation. She was also called on for her expertise when the VPD built its Mobile Command Post. The post is used regularly by the VPD at critical incidents. Constable Michael provided substantial input on the final design of the negotiator area within the Mobile Command Post, which helped to ensure that negotiators have the best tools and information during a crisis and can work effectively with other groups from within the VPD responding to the same crisis.

In addition to working through high-risk crisis situations and developing and moulding the Crisis Negotiator program at the VPD, Constable Michael has made huge contributions to the field by helping other police officers improve their skills to resolve volatile situations peacefully. Thanks to her well-earned reputation as a leader, Constable Michael is sought out by police agencies across the country and around the world for advice and/or instruction on crisis negotiation techniques. Over the course of her career, she has shared her extensive skills and knowledge locally, nationally and internationally and educated hundreds of police officers, crisis negotiators and medical practitioners.

Since 2007, Constable Michael has been a senior instructor at the Canadian Police College (CPC) in Ottawa, Ont., on all crisis negotiator courses and lectures as a subject matter expert on the national critical incident commander course. She has played a major role in twice redeveloping and re-writing the CPC’s negotiator basic course curriculum. As a lead instructor at the CPC, she has been invited to attend other world leading courses like the FBI’s National Negotiator course in Quantico, Va., and the U.K. National Negotiator course in England.

Constable Michael is so highly regarded in this field that she has also been asked to teach crisis negotiation techniques to police agencies around the world, including Singapore and the United Arab Emirates.

However, her work isn’t limited to just police officers and other law enforcement officials. Constable Michael has worked extensively with Dr. Randy Mackoff to develop a crisis negotiation workshop for psychologists and psychiatrists who provide consultative advice to law enforcement agencies. Because of her expertise and involvement, she also co-facilitates the workshops with Dr. Mackoff, who is a widely- recognized medical expert in the field of crisis negotiation.

Constable Michael’s leadership, dedication and passion have extended beyond crisis negotiation. In fact, in 2010, she was awarded the highest level of recognition at the VPD — the Chief Constable’s Commendation — for her work with the department’s Mounted Unit. VPD horses have served the community for more than one hundred years. Constable Michael joined the Mounted Unit in 2003 and was concerned by the condition of the stables which had started to deteriorate to the point where the animals were being exposed to conditions that risked their health and made them susceptible to injury. Due to budgetary constraints, new stables were not an option. So Constable Michael took it upon herself to raise money — outside of the police budget — to build a better facility. She worked through countless obstacles and challenges and connected with the community to raise tens of thousands of dollars to put towards a new and improved paddock for the police horses.

Although she has returned to a role in the Mounted Unit, Constable Michael continues to be an active member of the VPD’s crisis negotiating team. At the same time, by being generous with her time and expertise, she continues with her commitment to improve the quality of crisis negotiations for police agencies throughout the world through her teaching.

During her extensive policing career, Constable Michael has been an innovator and a leader and has provided incredible service not only to the community she serves, but also to policing. For her tireless commitment to systemic improvement, Constable Michael was again awarded a Chief Constable’s Commendation by the VPD in 2017.