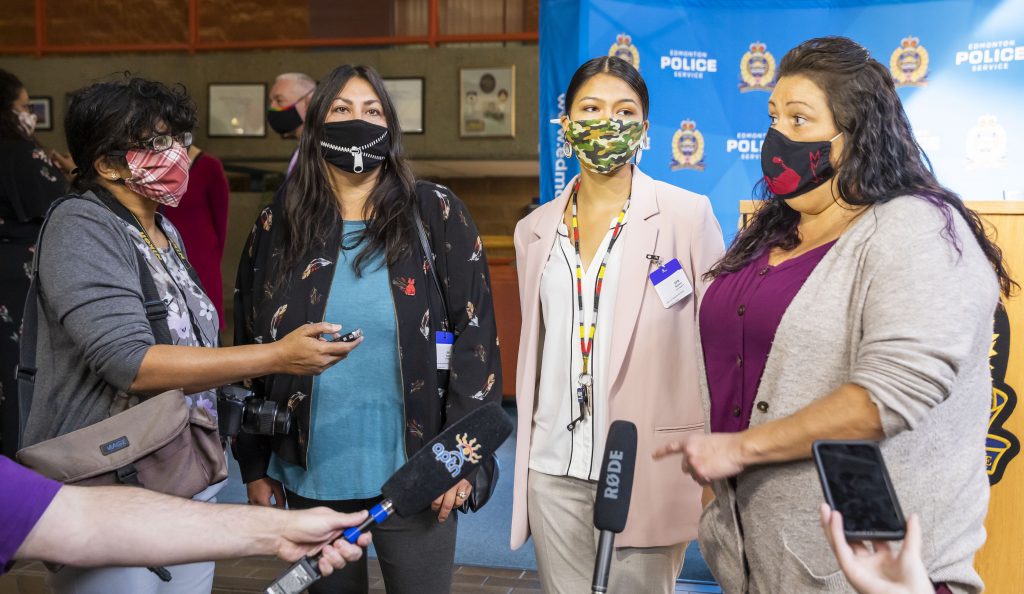 For 10 years Stephanie Harpe has been fighting for Indigenous people to have a voice when it comes to policing matters in Edmonton.

Finally, she says, that is happening and she puts her faith in actions announced by Edmonton Police Services Chief Dale McFee on Monday morning.

McFee announced that his police force is committed to engaging with Black, Indigenous, racialized, and underserved communities to improve policing and re-imagine “community safety and well-being.”

He announced a new strategy that acknowledges current community concerns, their calls for change, which addresses racial injustice and advocates for the need to work collectively to build, strengthen and repair police-community relationships.

Harpe’s past experience with the EPS has been bitter. In 1999 her mother Ruby Anne McDonald was murdered in Edmonton. Charges were never laid. Harpe, 19 at the time, said the Edmonton police were not easy to deal with.

She says that the changes McFee is talking about will be realized in the future interactions between Indigenous people and the city’s police force.

“We’ll start seeing (the changes) when our families and our communities get better served, get believed, get heard and especially our murdered and missing and exploited peoples,” she said. Harpe does community outreach and also works at the Institute for the Advancement of Aboriginal Women.

Kari Thomason is another long-time advocate for Indigenous peoples. She, like Harpe, is confident that under McFee’s leadership changes will happen, because Indigenous people will be heard.

“We have a chief that has actually stepped up to the plate. He’s taking accountability and he’s making the service accountable. We’ve never had that before. And I mean for all of my years being partnered with EPS, going on 20 years, we’ve never had this much partnership work or encouragement from a chief no matter how much it was always said we were part of the solution. We were never given our input to make solutions,” said Thomason.

She said McFee’s two predecessors offered only “lip-service” to the Indigenous community.

Thomason says she’s been waiting a “long-ass time” for Indigenous voices to be included in the discussions.

For Thomason, concrete examples of changes in the EPS will become evident when police officers come to Indigenous agencies and ask for their help in becoming better members of the service.

“That’s the biggest step. There are a lot of officers I’ve worked with over the years that step up to the plate and want to make a change. Those officers can guide the younger ones in. That’s highly encouraging for all of us,” she said.

McFee acknowledges that the death of George Floyd, a Black man in the United States, at the hands of police officers has galvanized people across North America and forced institutions to examine systemic racism. However, he is adamant that Floyd’s death, and the subsequent release of various videos of police action taken against Blacks, Indigenous peoples and people of colour that surfaced earlier this year, is not what has driven EPS action.

“EPS was well on their path to doing this. I think the death of George Floyd has actually expedited the change,” said McFee.
“I think finally the roads are all coming together and maybe there’s an appetite to say we need to invest in something different and that’s why I think EPS wants to expedite that even quicker than they have in relation to Vision 2020. It’s certainly what I would like to see come forward. [The death of George Floyd] has elevated our path and trajectory to get it done.”

McFee says part of his mandate when he was hired in early 2019 was “to drive this kind of change.”

Vision 2020 is the EPS’s business plan for 2020-2022 and is an organizational review and restructuring of existing EPS resources aimed at balancing traditional enforcement with additional social supports. The changes were driven through extensive internal consultation and fuelled by Edmonton’s high crime rate. Forty of the 75 recommendations have been implemented to date.

Now, McFee wants to make changes for his organization by looking at community members who can advise on how EPS can become “an anti-racist and responsive police service.”

Thomason was one of those people who participated in the first community engagement session.

More community engagements will be happening through 2021, but McFee promises not to stop after the talks and after the notes have been taken. What will follow “needs to be actionable,” he said.