A response to the Ombudsman’s Report, In the Line of Duty, highlighting the impact policing has on first responder families 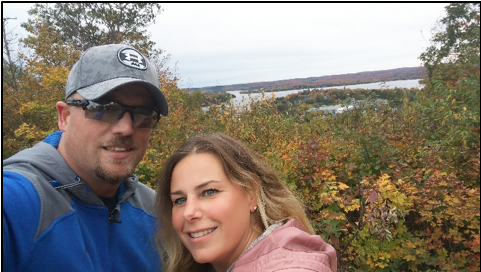 These are all real clips of what I have lived with for many years. The fear of my husband getting hurt in the line of duty was something that started when we worked together on the same platoon — but different districts — several years ago. I would hear his voice over the radio as he performed his policing duties —making arrests, engaging in pursuits or even foot chases all in real time — and fight through the helpless feeling of not being able to do anything but sigh with relief when it was over and he was once again safe.

This worry and fear eventually came to fruition on the early morning of July 26, 2011, and it will be a day I never forget. My husband, Ben, fell asleep on his way home from an emergency callout while working in the Marine Unit. He had been called out by his sergeant the previous night to search for a missing boater on Lake Simcoe in Ontario.

A callout from the Marine Unit is significant. The reality is that if police officers do not respond, generally there is no rescue of the boaters, but rather a recovery. Regardless of whether or not it is a police officer’s day off, you go. In Ben’s case, he had worked all night. When he fell asleep on his way home, he crashed into a pole with a road sign attached. The pole toppled over and the sign sliced through the roof of the car coming into contact with his head acting like an axe. This was later explained by the neurosurgeon along with my spouse’s injuries: a fractured skull and traumatic brain injury.

He was transported to Sunnybrook hospital in Toronto, where his skull was pieced back together and the brain bleeding stopped. During the first 11 days in the ICU, it was clear that this was a life changing injury and there would be a very long recovery. Unfortunately, with brain injuries, other conditions can develop, which is what happened with Ben.

He developed a seizure disorder. He was paralyzed and lost the ability to speak. There were many more related conditions, some of which developed over time and would have the greatest impact on our entire family. It seemed that every day was there was a startling realization of what would become our “new normal.” He was eventually released to Bridgepoint rehabilitation hospital and for the next three months he worked tirelessly at his recovery.

I, on the other hand, became a single full-time working mom to two young active hockey playing boys. I had to create a life as normal as possible for them while dealing with my own emotions and trying to visit Ben in the spare moments. To say this was taking a toll on me is an understatement. Did I mention that I always put on a brave, happy, positive face when I visited Ben, as he was the one recovering, away from his home and his children?

His release date was fast approaching and I was elated. Everything would be as it was before. That is what I thought and what I desperately wanted, but I quickly realized my husband had not returned home; I would never have the husband I once knew back.

What hit Ben at this stage with full force was depression and anxiety. After being home for a while, Ben realized he would no longer be able to perform the duties of a police officer, a job that he felt defined him. He became increasing distraught, depressed and anxious and began making real and very troublesome comments, some with suicidal ideations. I was terrified. I had lost my husband once and I did not want to lose him again.

Thankfully, both Ben and I are members of York Regional Police. As members of York Regional Police and as Ben’s wife, I was very grateful I was not alone. I knew what services our organization provided and was able to access the assistance he required. This assistance initially came in a form of a co-worker from our Critical Incident Stress Management team, who came to talk to Ben as a peer. This conversation deeply resonated with him and prompted him to seek the appropriate professional help so he could work on accepting his new life.

I am forever grateful I work for York Regional Police, and that I am aware of the services, benefits and resources — including who to immediately contact when a member (such as my husband) is seriously struggling. After our situation started improving, I began reflecting and questioning on what we went through. I actually became fearful of what would have happened to my husband, myself and our family if I did not work here… if I did not have the resources and know where to turn in our time of need.

My fear that he may have acted on his comments and ended his life was real. I decided that some good had to come out of our personal tragedy and I decided York Regional Police needed to provide supportive information to the spouses and families of our members, and I am humbled to say that this was when York Beyond the Blue (YBTB) was born, in 2017.

Initially, York Beyond the Blue struggled to get off the ground, as many new endeavors do, but I was determined to make it a reality. One, of the main hurdles was communication. Members were not passing information onto their spouses and families. Thankfully, with the financial support of our Executive Command Team, York Beyond the Blue is now able to reach out to family members directly through mailing information right to members’ homes and also by hosting various events for families to attend. York Beyond the Blue’s goal is to provide education, support and resources to the families of York Regional Police members, so they know where to turn in their time of need. This support for families begins right from recruit graduation, as families are in typically all in attendance on this day, and information about all of our initiatives — including a well-received book, I Love a Cop, is distributed by York Beyond the Blue.

York Beyond the Blue operates differently than other spousal support programs as it is run internally, from within our Peer Support Unit. This is a unit completely dedicated to not only the well-being of our members, but also their families.

YBTB is starting to see great success in engaging families through various events such as the recent cookie decorating night, Yuk Yuk’s Valentines date night, paint night and yoga night. These events always include a component of education and awareness in regards to supportive resources. We have learned that having events entitled ‘educational evenings’ do not necessarily attract many participants, but a member appreciation BBQ with a scavenger hunt locating artifacts (member resources) will attracted close to 500 participants. Although, York Beyond the Blue is operated and funded through York Regional Police, we understand the importance of having an external element to the program therefore naming an ambassador, Amanda Plunkett.

Ben would love nothing more to be back on the road, wearing his York Regional Police uniform proudly, however he is no longer able to perform those duties. He is now in an accommodated position as a valued police officer. He now ultimately views his life on a bigger scale; he doesn’t just define himself in terms of being a police officer but now most importantly as an amazing husband and father.

Families are the true first responders for our members and we will continue to grow our program, ensuring our families are equipped with the knowledge and support they require. Regardless of the varying models of family support programs, it is imperative that families feel supported and know where to turn if they or their loved ones are in a time of need. Although, York Beyond the Blue does not follow the same model as other Beyond the Blue chapters, all chapters are run by dedicated family members. Please contact Canada Beyond the Blue, or ybtb@yrp.ca for any further inquiries.

Jen Thompson has been employed as civilian member of YRP since 2001.  Her career path led her into a variety of roles including records, station duty operator, crime analysis and currently as the early intervention analyst within the Peer Support Unit.

Related
Strengthening our “resiliency armour”
Big problems can lead to big solutions
Have you heard about The Haven & what it can do for first responders & uniform personnel?
Boots on the Ground non-profit celebrates launch • PHOTOS and VIDEO