The XC2 is SureFire’s smallest, most lightweight handgun light with an integrated laser. 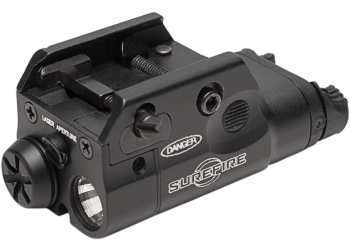 It features a recoil-proof LED that’s focused by a multi-faceted reflector to create the company’s 300-lumen MaxVision Beam. The XC2’s 635nm red laser is highly visible and, once zeroed, rarely needs re-zeroing thanks to adjustment screws that won’t back out from the effects of recoil, according to SureFire. Measuring less than 2.5 inches long and weighing two ounces, the XC2 won’t weigh down your handgun. Its compact body is constructed of lightweight aerospace aluminum with a Mil-Spec hard-anodized finish. Ambidextrous switching provides both momentary- and constant-on activation for precision control.