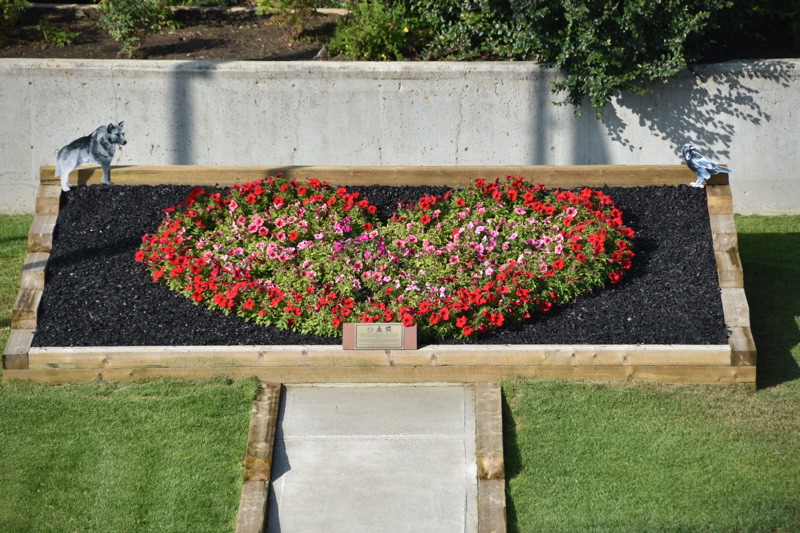 The Whitehorse RCMP has dedicated their new heart garden to the Ta’an Kwäch’än Council and Kwanlin Dün First Nation, in honour of all residential school survivors and their families. RCMP employees, local elders, representatives from both First Nations, partners and media were all in attendance for a ceremony on Aug. 13, 2019.

The idea of planting heart gardens at detachments across the Yukon was that of Sgt. Calista MacLeod, who has worked for the Yukon RCMP for 14 years. She had seen a similar idea online on the First Nations Child & Family Caring Society website and thought it could be adopted in the Yukon to help strengthen relationships between the RCMP and Indigenous communities.

A great deal of planning went into designing the garden. After all aspects of the space were carefully considered, members of the RCMP, the Ta’an Kwäch’än Council and Kwanlin Dün First Nation gathered in front of Yukon RCMP headquarters on 4th Avenue in Whitehorse to plant hundreds of pink and red petunias in the shape of a heart. A wolf and crow, made by the Youth of Today Society, were also added to the garden to represent the two First Nation clans in the Yukon.

Many have since asked about the purpose of the garden. It’s the RCMP’s hope that the carefully crafted display of flowers will serve as a healing and gathering place for local First Nations, especially when there is a need to bring attention to local issues. The heart garden is not meant to try to right the wrongs of the past, or to diminish the role the RCMP played in the residential school system.

“We acknowledge the impact that our actions have had on Indigenous families and communities in the Yukon, and we hope that the decisions we make from here forward will show sincerity and dedication to bringing positive change to the communities we protect and serve,” said Chief Supt. Sheppard at the dedication ceremony. “While this is a small gesture on the part of the RCMP, we hope that it is accepted in the spirit in which it was offered, and will continue to serve as a reminder to everyone who sees it of the Yukon RCMP’s commitment to strengthening our relationships with Yukon First Nations.”

The first Yukon RCMP heart garden was actually planted at Beaver Creek RCMP detachment in summer 2018, followed by gardens at the Haines Junction, Mayo and Old Crow RCMP detachments in 2019. Each garden is beautiful and unique, much like the communities in which they are planted, the RCMP said.

The RCMP also noted it hopes to eventually see heart gardens at every detachment across the territory.