Features Behavioural Sciences
What is the Boogaloo movement? 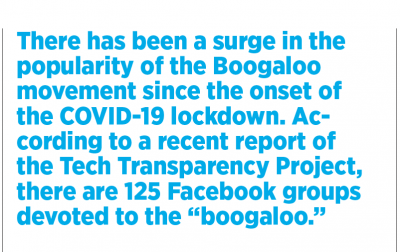 The Boogaloo movement started out as a meme. The origin of the term boogaloo comes from a movie; in 1984 the breakdancing film Breakin’ 2: Electric Boogaloo was released and the title became a joke. “Breakin” was replaced with another word or term — such as another film, event or a person of their choice.1 One of these sayings, “Civil War 2: Electric Boogaloo,” has taken on a life of its own and since 2019 it been used by a collection of right-wing, anti-government groups who identify themselves as the boogaloo boys or boogaloo bois.

The boogaloo boys are preparing for the coming of the second American Civil War. This is not new in the landscape of American domestic extremism. One of the motivations for Timothy McVeigh’s bombing of the Alfred P. Murrah Federal Building in April 1995 was his belief that it would spark the second American Revolution and would influence like-minded individuals to take up arms against the United States government.

Part of the boogaloo jargon involves word play. They refer to themselves as boogs, the boojahideen, big igloo and big luau. When they attend protests the “boys” will wear Hawaiian shirts with their tactical clothing in reference to the civil war being the “big luau.”

Some have adopted symbols and memes of the far-right like Pepe the Frog.2 Other symbols include an American flag, entitled the “Thick Boog Line” mimicking the “Thin Blue Line” of law enforcement. The line, through the flag, is a Hawaiian motif and an igloo is in the upper left corner where the stars would be.

There has been a surge in the popularity of the Boogaloo movement since the onset of the COVID-19 lockdown. According to a recent report of the Tech Transparency Project (TTP), there are 125 Facebook groups devoted to the “boogaloo.” More than 60 per cent of these groups were created in the last three months, as the pandemic took hold in the U.S. They attracted tens of thousands of members in first month of the lockdown.3

In accessing a representative sample of private boogaloo Facebook groups, the TTP discovered they discussed topics such as weaponry (including flame-throwers, improvised explosive devices), tactical strategies and combat medicine. They also took inspiration from Donald Trump’s tweets about “liberating” the States where governors had imposed stay-home orders. They view the lockdown as a violation of their rights.

Many boogaloo references are directed against the “alphabet boys” or “alphabet gang” – agencies like the FBI, ATF, RCMP, OPP and SQ – who they assume would assist in any gun confiscations. At the beginning of May 2020, Facebook banned the term “Boogaloo” from posts when used in conjunction with posts depicting or calling for violence.

Their beliefs tend to be what the extremist watch group, the Soufan Center, refers to as a “patchwork.” While definitely right-wing, pro-gun and anti-police, many have links to white supremacy groups/neo-Nazi groups. In addition to their COVID-19 protests, they also recently used the Black Lives Matter (BLM) demonstrations, after the murder of George Floyd, as a cover for their anti-police activities.4

In March, a Missouri man with ties to neo-Nazis was shot and killed when FBI agents tried to arrest him. Timothy Wilson, 36, was planning to bomb a hospital in the Kansas City area on the day a COVID-19 stay-at-home order was scheduled to take effect, authorities said. Wilson told an undercover FBI agent that his goal was “to kick start a revolution” and referred to his plans as “operation boogaloo.”

At the end of May 2020, the FBI arrested three individuals associated with the Boogaloo movement on their way to a BLM protest. They were in possession of incendiary devices with the intent to create civic unrest by capitalizing on the protests. All three had U.S. military experience. They have been charged with two counts each of terrorism and two counts each of possession of explosives.

In a separate incident, a USAF (United States Air Force) sergeant ambushed police in Santa Cruz, Calif. on June 6, 2020, killing one officer. He is a suspect in the murder of another officer a week earlier in Oakland, Calif. At the time of his arrest, “boog” was written in blood on the vehicle he stole. His Facebook page, reportedly, was laden with memes often associated with the Boogaloo movement.5

Are they in Canada?

The internet and extremism know no boundaries. In January 2020, the FBI arrested and charged three members of an alleged neo-Nazi group with conspiracy to commit a murder that a former Manitoba reservist has been accused of recruiting them for. The three were allegedly preparing for “the collapse of the United States and subsequent race war, ‘boogaloo,’” according to the affidavit.

In the wake of the tragic shooting rampage in Nova Scotia, and the government’s response to the possession of assault-style weapons, Canadians who self-identify as boogaloo boys have become active on social media sites. In summary, boogaloo is a non-centralized, heterogeneous group of individuals with a mixture of ideologies aligned with white supremacists, neo-Nazis and anarchists. They share the same dislike of government and the police, and believe in their right to possess assault weapons. Are they coming to Canada? No, they are already here.

Related
Delta Police Chief to community: please stay home
Managing COVID-19 in Canadian prisons
Adapting together in times of uncertainty: thank you, technology
“Another brick in the wall” of police work: COVID-19