News Off the Shelf
What do the two Sarnia police officers shot in the line of duty have in common?

Keep your eyes peeled for this new book, Keeping the Peace: 160 Years of Policing the Imperial City 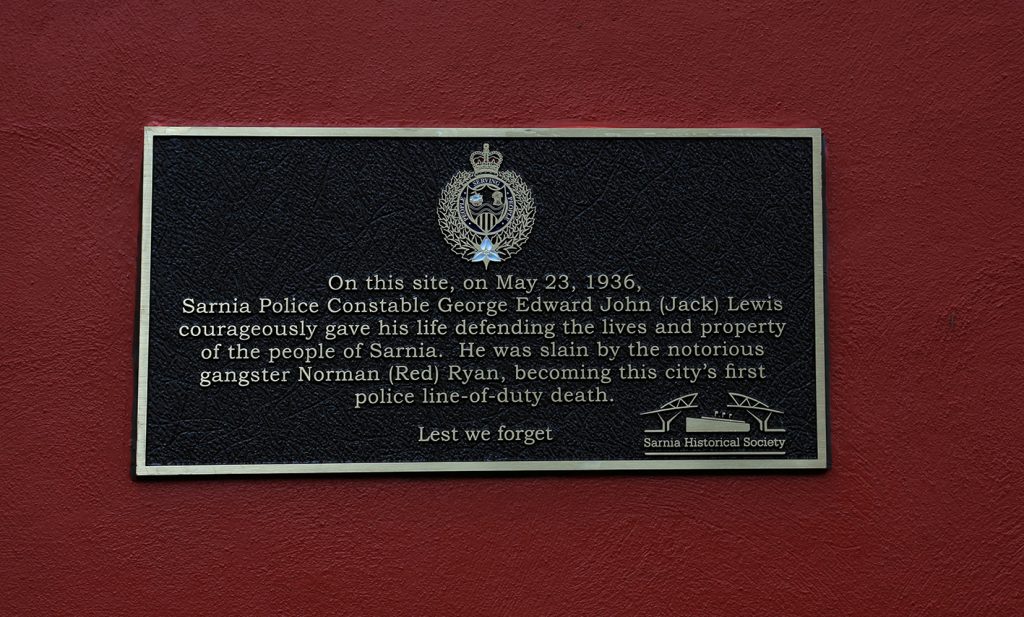 Throughout the 160-year history of the Sarnia Police Service, only two officers have ever been shot in the line of duty, and the two events happened 62 years apart.

In 1936, Const. Jack Lewis was shot and killed by the notorious Red Ryan during a liquor store robbery on Christina Street.

Then, in 1998, Const. Laurie Griffin was injured by a shotgun blast during a struggle with the gunman on Stuart Street. Thankfully, Laurie Griffin did not lose his life that night: merely five and a half weeks off work and nerve damage to a finger, from which he eventually recovered.

But here’s the remarkable connection to these two events. Jack Lewis was Laurie Griffin’s great uncle.

The only two officers ever shot in Sarnia in 160 years were, incredibly, members of the same family. Jack Lewis’ widow was Vera Hardick. Laurie’s mother, Thelda Hardick, was Jack’s niece.

It represents an incredible level of service from one family.

In 1998 the Canadian Government officially proclaimed the last Sunday of September of every year as National Police and Peace Officers Memorial Day. Across the nation, flags will fall to half staff as we remember almost 900 fallen police officers across Canada, slain while on active service.

That same date, September 29, is the religious feast day of St. Michael the Archangel. Considered the commanding general in God’s army against evil, St. Michael is the patron saint of police officers and soldiers.

“St. Michael, protect us in battle,” is the brief prayer offered by believers facing danger.

The tragic story of Jack Lewis and the chilling tale of his grand nephew, Laurie Griffin, are striking reminders of the ever-present and often unexpected dangers faced by the courageous men and women members of the police service.

Jack Lewis and Laurie Griffin are certainly not the only officers who have been fired upon, threatened or physically attacked. During the two years that this writer has spent researching their story, I have been staggered by the perils they have confronted: far more, I believe, than most citizens of this city could possibly imagine.

Sarnia has two police line-of-duty deaths which we must never forget, and we especially need to remember them on September 29. In addition to Jack Lewis, G. Roy Vanderveer, a motorcycle patrolman, died in 1944. On a cold, miserable night in March of that year, Const. Vanderveer was killed in a collision with a train at the Suncor curve while in pursuit of a fleeing motorist.

These brother officers are Heroes of Sarnia. One Sept 29, and always, we will honour and remember them.

*The stories of Jack Lewis, Laurie Griffin and many more can be found in Egan’s new book, Keeping the Peace: 160 Years of Policing the Imperial City, available soon.