Last weekend’s unsanctioned student event in London, Ont. was attended by an estimated 20,000 at its height and was a significant strain on emergency services throughout the City of London, said the leaders of London’s police, fire and paramedic services at a news conference on Tuesday. 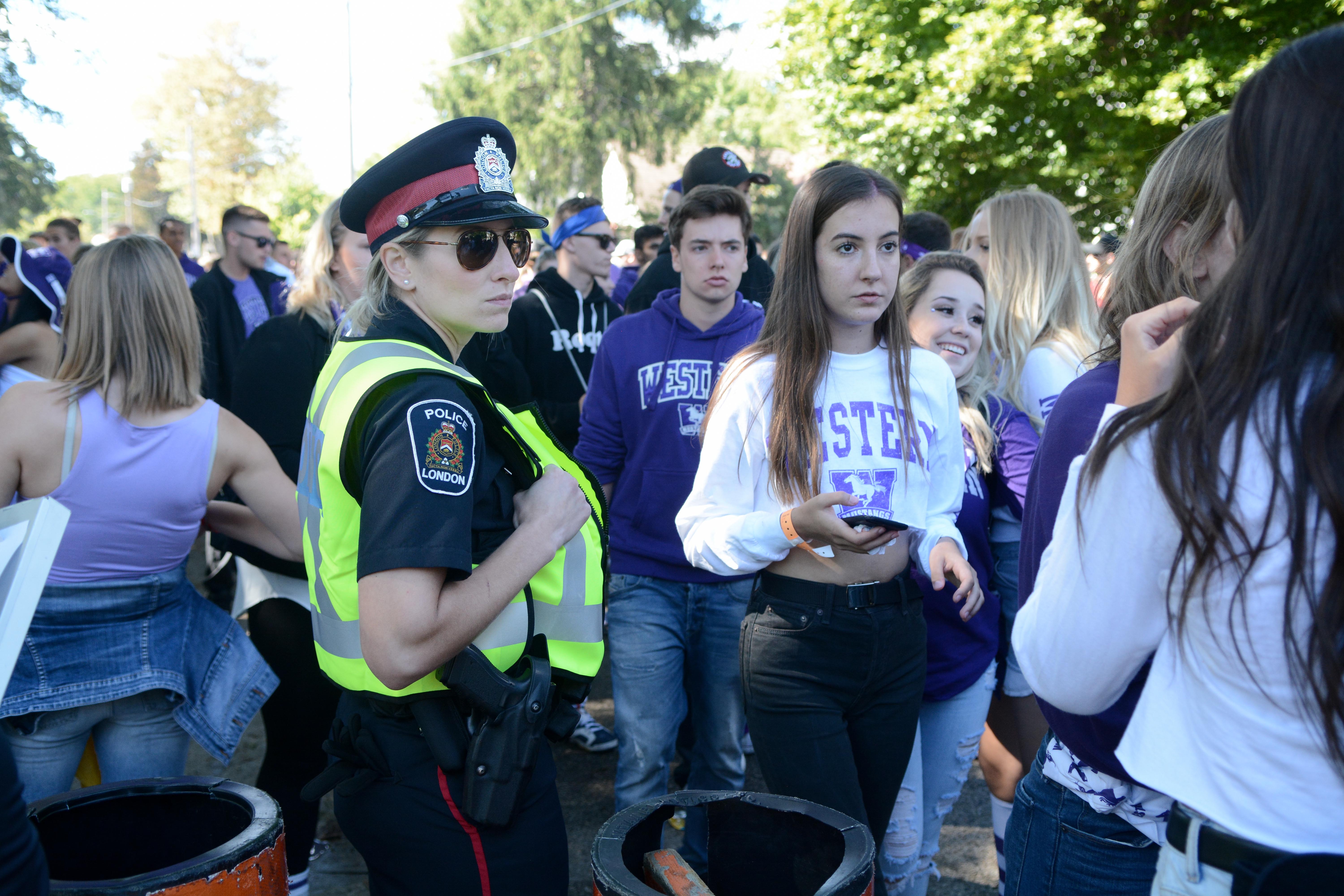 There were more than 130 provincial offence notices issued and more than 3,100 warnings given during the student-created event on Saturday, known as FOCO. A total of 28 people were transported to hospital during a three-hour period in the afternoon and just over 50 were treated in London hospitals as a result of FOCO-related activities. The London Fire Department found fire code violations at 30 residences as well.

While the costs to emergency services in the city are still being tabulated, the cost for policing alone is expected to be more than $100,000, said Chief John Pare of the London Police Service. Included in that is the cost of bringing nearly 30 York Regional Police officers in to complement London’s dozens of deployed officers.

“Even with those additional officers, our efforts to proactively patrol to dissuade unlawful acts and inappropriate behaviour quickly shifted to crowd management to minimize the negative impact and mitigate the risk to officer and public safety caused by the large crowds,” Pare said at the news conference.

The crowd was significantly larger than in 2017, with an estimated 15,000 people by about noon and approximately 20,000 less than one hour later. “The number of hazardous situations in the area were staggering, placing the public and first responders at risk,” said London Fire Deputy Chief Jack Burt.

Despite staffing in additional resources, all emergency services expressed concern about reduced capacity to provide services to other areas of the city. “An event of this size caused an increased demand on Middlesex-London Paramedic Service resources and our ability to provide service to the City of London and County of Middlesex, even with additional resources deployed,” said Middlesex-London Paramedic Service Chief Neal Roberts.

“The alcohol-fueled bravado antics of ‘brewfing’ will lead to a fatality. We need a collaborative solution that involves landlords, tenants and the university,” added Orest Katolyk, Chief Municipal Law Enforcement Officer.

Looking forward, Chief Pare vowed to continue looking for a solution. “The next steps are critical,” he said. “We cannot rely on a police-centric approach, nor can we rely heavily on enforcement as the mechanism to control behaviour.”

Over the next several weeks, debriefs will be held to look at the individual and collective response, as well as consultation with other first responders in communities where this type of unsanctioned student events are ongoing issues.

Waterloo Regional Police also had its resources tied up on Saturday with its own student homecoming.

“As the Homecoming crowd continues to grow each year, the unsanctioned street event causes a great public safety concern to our entire community,” said Bryan Larkin, Chief of Police. “Not only is it a significant drain on emergency resources, it also brings considerable safety risks to those in attendance. Our officers responded to several calls during the unsanctioned event and witnessed many incidents that were both disrespectful and dangerous. As we move forward, we will continue meeting with our community partners to discuss how we work to end such unlawful, unsafe and unsanctioned gatherings.”

A peak attendance estimate has been set at 14,000, making this weekend’s homecoming crowd the largest to date in Waterloo. (This estimate is based on the attendance in the Ezra Avenue corridor during the day’s busiest time and is not a reflection of the total attendance for the day.)

Preliminary results indicate that a total of 462 charges were laid in relation to Homecoming. These include charges for Highway Traffic Act (71), Liquor Licence Act (304), Criminal Code (3) and By-Law (18) offences. Other charges were laid under the Trespass to Property Act (53), Controlled Drugs and Substances Act (3) and Other Provincial Offences (10). In addition, 12 people were arrested.
These numbers represent charges laid by both the Waterloo Regional Police Service and Wilfrid Laurier University’s Special Constable Service.