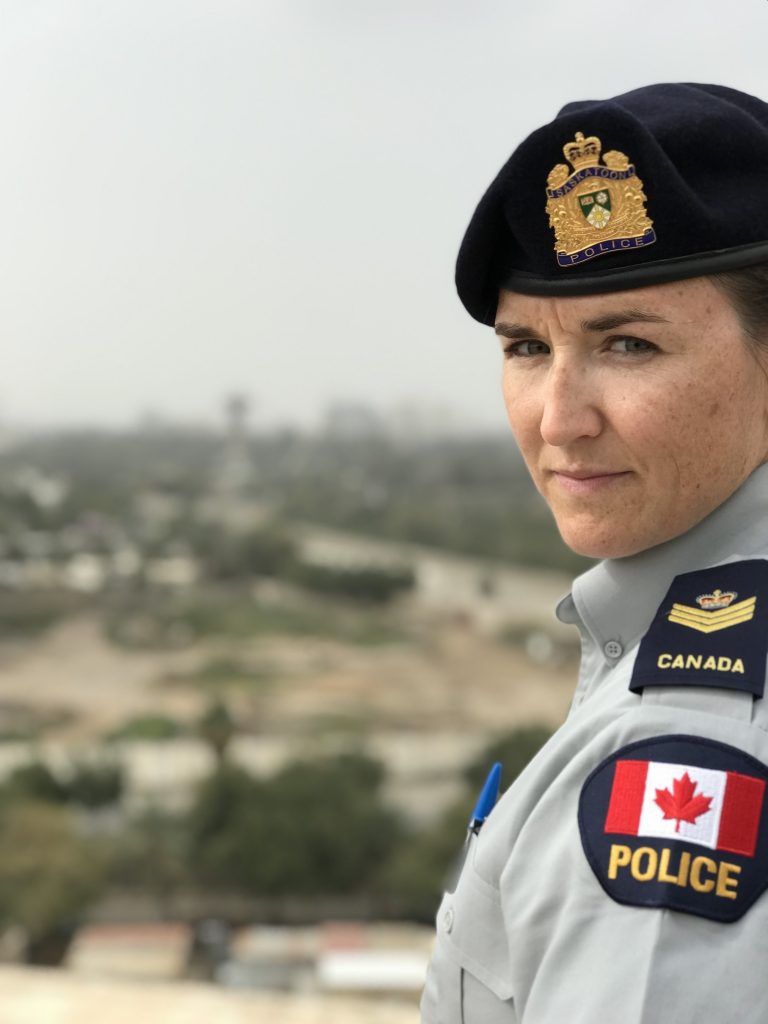 Q: How long have you been in policing? Why did you choose this career?

I’ve been in policing for 19 years, all with Saskatoon Police Service. I’m the first police officer in my family; we’re a farming family and I’m originally from Roland, Manitoba. I have a document from kindergarten and it asks, “What do you want to be when you grow up?” For some reason, I wrote “police officer” and it stuck. I love people and puzzles and how you can do so many different things in policing.

Q: How did your deployment within Operation Inherent Resolve come about?

I’ve always been interested in the international deployments. I never thought I’d have the opportunity to do it; I wanted to have a family. That wasn’t happening, so I thought, well, why not try this as a next step in my career. I’ve always loved traveling, too. In 2008, I had the opportunity to go to Syria and Turkey as a tourist. It was truly just an amazing experience. The hospitality we received while we were there was next level. So, I’ve always had an interest in the Middle East and enjoyed it. This opportunity came up, the timing was right and I started my application process. I had no expectations but when I received that first phone call, I was thrilled.

Q: Are there other Saskatoon Police members on deployment? Did anyone who has done something similar inspire you?

I’ve had a couple friends who were deployed to Afghanistan so I was definitely interested in their experiences. One of our inspectors was previously deployed on the same mission as I was but in a different capacity. We have one other officer currently deployed to Iraq and two preparing to go. We also have another member in Ukraine so Saskatoon has been incredibly supportive of these opportunities.

Q: How did it feel to be the first female police officer from Canada deployed to Iraq in a police peace operations capacity?

I didn’t realize I was the first Canadian female police officer to be sent over there, honestly. There are a lot of women there with the military and in other roles, too. All of it was overwhelming; from going into the country and not knowing what to expect to walking into my first classroom with a fellow Czech instructor and seeing 133 guys in this class. I just had to walk in and think to myself, “OK, I’m here and I can do this.”

Q: What is your most memorable moment from the deployment?

There was one class called “Train the Trainer.” We started with about 30 students and they are selected from a larger “Law and Order” class of about 130 students. These 30 individuals are chosen to become “trainers” so they can continue the education forward. We were halfway through class and down to about 15 students when we began the “teach backs” portion. They are given all the material and videos in Arabic, which we presented, and they have to teach it back to the small class for practice.

Two of the students got up and presented on human rights and they did it better than I did. They were phenomenal. There’s a video on human rights and they chose to play it with no sound. It’s about a father who is driving his daughter to the hospital because she has been shot. They arrive at the hospital only to find it has been blown up, and his daughter dies in his arms. It was one of the most powerful experiences I’ve ever witnessed. The conversation they engaged the class in afterwards just gave me goosebumps. The quote they used that sticks with me is, “If we do our job, we give them life.” For me, I was completely taken aback. I’ll never ever forget it.

Q: What was the most surprising thing?

When you go into the coalition setting —working with Italians, the Finnish Police, the Czech Republic, Slovakian military police — you don’t realize how different your cultures are. What may be important to me, for example, isn’t as important to someone else in the coalition. It was refreshing to see all the different perspectives and learning how to work together.

Q: Tell us more about implementing the Female Policing Course.

That course was life changing for me. It’s an Italian-run course. They develop it in consultation with the Iraqis. Sgt. Trina Gosse from the OPP, who was essentially my partner in crime for most of the mission, and I were given the opportunity to assist. So, we did everything from human rights to domestic violence to interviewing vulnerable witnesses. Trina has expertise in domestic violence and I have expertise in investigative roles and working with vulnerable people so we brought those components to the course.

We also did some rapport building with the female Iraqi police officers. We talked about where they wanted to vacation and created a relationship by sharing stories. Then we were able to hear what was happening in their communities, the challenges they were facing at work, the successes they were seeing. To establish that kind of relationship with those women was just amazing. We were pretty confined in terms of movement so they would even bring in food so we could taste the local cuisine. The classroom environment became its own little community.

The course is still ongoing. I was a part of two of them. Trina and I were always trying to develop it further and make it applicable to what was going on in their country and specific to their needs.

Q: What is it like to be home again after such an experience?

Costco is a bit overwhelming right now… After living on a base for an entire year, it’s an adjustment cooking and grocery shopping again.

Q: You were away for a whole year. What makes it all so worthwhile?

The students and the teaching make it worthwhile. These students are already police officers and when you start engaging with them, you realize, as police, we are all dealing with the same issues — whether it be theft, domestic violence, terrorism, drugs. The differences are sometimes in the root causes, such as different access to resources and different ways of problem solving. At the end of the day we all want the same thing: to be safe and secure with friends and family.

I’m so grateful to be a part of Team Canada in this capacity and in giving the Iraqi police more tools and skills to be problem solvers as opposed to just following military direction. I’ve learned an immense amount about Iraq and its culture and people. I struggle to put it all into words and not sound like a cliché.