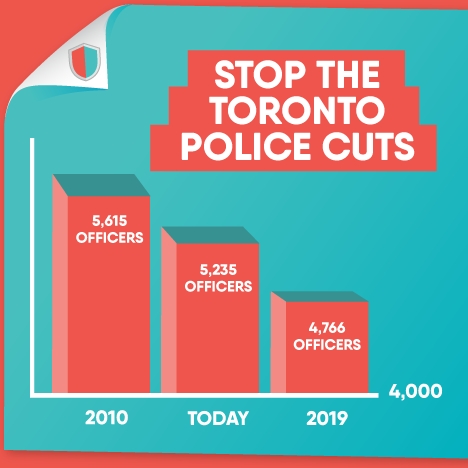 This is the loud-and-clear message on a new website, launched just yesterday by the Toronto Police Association, to bring attention to the “alarming series of cuts” affecting staffing.

“These cuts continue to weaken Toronto police officers’ ability to keep the city safe, engage proactively with the community and deliver policing to parts of the city where it matters most,” TPA states.

Many divisions are struggling to fill “even half of the needed patrol cars at the start of the shift. For example, it is not uncommon, for 42 Division— Toronto’s largest police division stretching from Victoria Park Avenue on the west, to Pickering Townline on the east, Steeles Avenue on the north and Highway 401 on the south — to cover an entire division with almost 300,000 residents with three or four patrol cars.”

This is leading to more and more burnout, TPA says, noting 95 members have resigned so far this year, 36 of whom left for police services nearby.

The website beseeches officers and the public to take action by joining the Facebook group and sending a message to Chief Saunders, Mayor John Tory and Toronto Police Services Board Chair Andy Pringle.

“Quite simply, we now don’t have enough police officers to meet demand,” the site concludes.