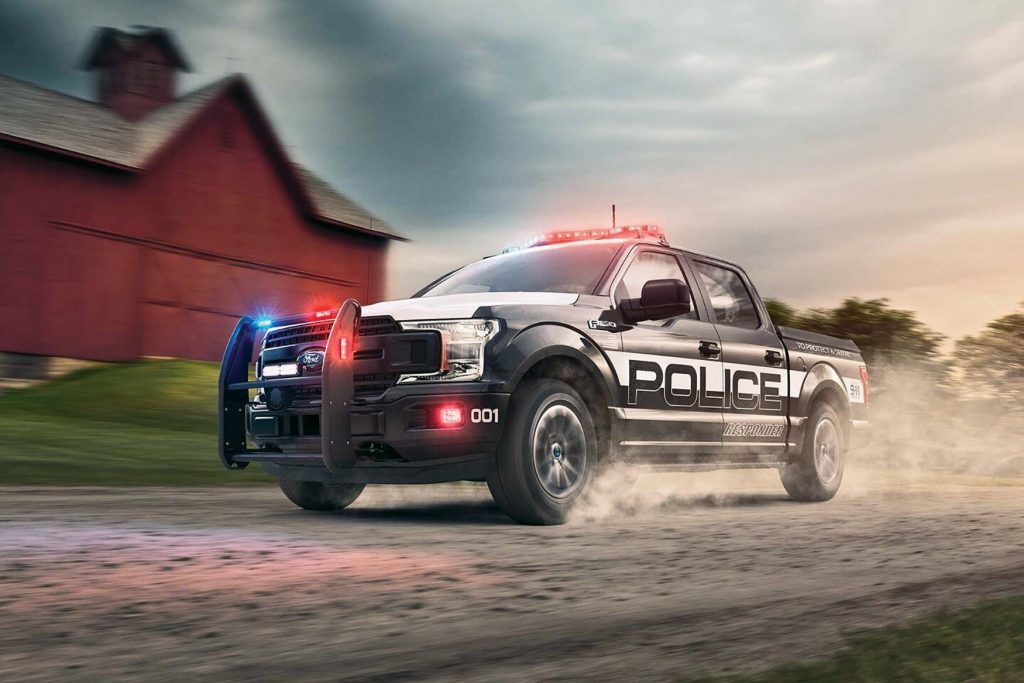 This year will truly be remembered as the year of the police SUV. Dodge is now the last remaining supplier of pursuit-rated police sedans in North America. This means 10 vehicles remain in the 2021 Michigan State Police vehicle testing.

With Ford getting out of the sedan market entirely, plus selling more police SUVs than Dodge and GM combined, this was not surprising. Ford is not just the number one selling pursuit-rated police vehicle in Canada, they are also the fastest (Police Interceptor Utility SUV with the twin turbocharged 3.0L V6 EcoBoost motor, formerly only available from Lincoln) and the slowest (F-150 Police Responder pickup truck with the twin turbocharged 3.5L EcoBoost engine.) They are also the only choice in hybrid police vehicles.

Fiat Chrysler has not been resting on its laurels. The new 2021 Dodge Charger Pursuit is available in an all-wheel-drive (AWD) version with a 3.6-litre V6, and a rear-wheel-drive (RWD) version with the 5.7-litre V8 motor. Dodge also sells two pursuit-rated versions of its AWD Durango.

General Motors has completely redesigned the popular and roomy Chevrolet Tahoe Police Pursuit vehicle (PPV) for 2021. It is available in both a two-wheel-drive and a four-wheel-drive version. Both versions come with the 5.3-litre V8, and there are only fractions of a second difference between the two drive-train layouts. This can be observed in both lap times and acceleration. The Chevrolet Tahoe gets the front skid plate, front bumper and grill from the civilian Z71 Tahoe, which both improves looks and increases approach angles for hopping over curbs. With the same engine output as last year, improvements were made in breathing, crankcase ventilation (with new rocker covers from the track-ready Chevy Camaro ZL1) and in increased in cooling capacity of the engine, transmission and brakes.

Of most significance is the new platform under the 2021 Tahoe, which increases cargo space and adds fully-independent rear suspension. The previous Tahoe was one of the very last full-size, body-on-frame SUVs with a solid axle rear end. The new independent rear suspension is a huge improvement over the older live-axle design. Chevrolet have always been good at designing well-handling police vehicles but, even with clever design, the solid rear axle always had a tendency to slide sideways on very rough differ washboard gravel roads. The 2021 Tahoe eliminates that and vastly increases braking capability and high-speed handling.

Ford, Dodge and Chevrolet are still the only pursuit-rated, purpose-built police vehicles in North America. They abound with officer-safety, performance and comfort enhancements to turn an office-on-wheels into the toughest, safest, fastest and best-handling police cars ever made.

While there is no strict definition of the term “pursuit-rated”, agencies such as Michigan State Police and Los Angeles County Sheriff ’s Department extensively document and test every model offered for sale in North America. They agree that a pursuit capable police vehicle must be able to handle higher stresses than normal and perform better at high speed than their civilian counterparts. Even without any formal recognition of the term “pursuit-rated”, it will be up to individual agencies to determine if a particular vehicle is suitable for their mission.

Every fall the Michigan State Police, in conjunction with the US National Institute of Justice (NIJ), test the handling and performance of every new police vehicle on the market for the coming year in back-to-back acceleration, braking and lap time tests. These eagerly anticipated tests are seen as the most comprehensive analysis of police vehicles in North America.

The Michigan State Police yearly vehicle test for the 2021 model year will mark the 23rd consecutive year that Blue Line magazine has been compiling and reporting the results of the tests for police category vehicles.

These are the Police category vehicles that will be available for sale in Canada for 2021 (with preliminary figures from the 2021 Michigan State Police vehicle tests, and additional comments from Blue Line Magazine.)

Acceleration, braking and top speed tests are performed at the Chrysler proving ground and vehicle dynamics tests are done using the two-mile road course at the Grattan Raceway.

Note: All dimensions and measurements are given in U.S. numbers.

The objective of the vehicle dynamics testing is to determine the highspeed pursuit handling characteristics. Except for the absence of traffic, the two-mile road course simulates actual pursuit conditions and evaluates the blend of suspension components and acceleration, and braking ability. 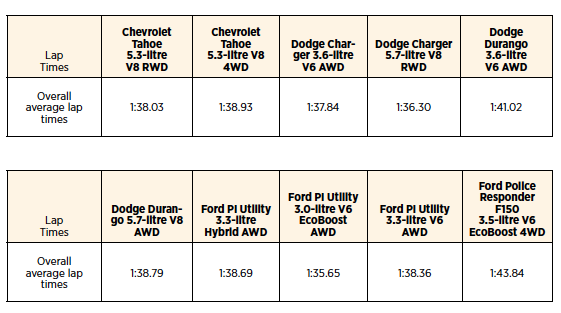 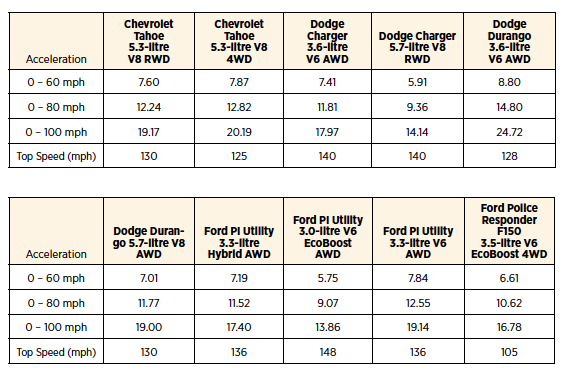 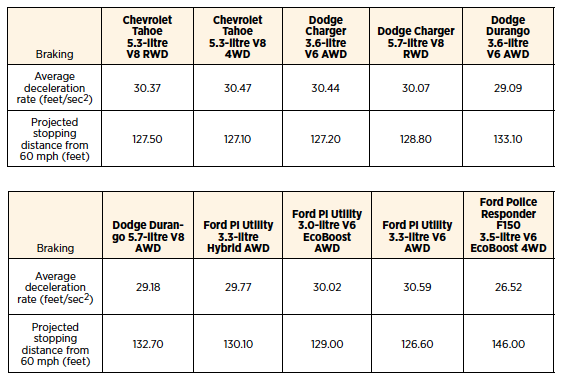 Vehicle figures are based on data published by the vehicle
manufacturers and certified by the U.S. Environmental Protection Agency. Mileage figures are given in U.S. miles per gallon.

The objectives of the communications and ergonomics tests are to rate a vehicle’s ability to provide a suitable environment for patrol officers to perform their job, to accommodate required communication and emergency warning equipment and to assess the relative difficulty in installing this equipment.

A minimum of four officers independently evaluate ergonomic factors, and Michigan State Police Communications Division personnel then evaluate each vehicle on the ease of equipment installation.

Michigan State Police had not released Communication and Ergonomic scores for 2021 as of our deadline, so 2020 figures are listed. It is expected that 2021 figures for the Chevrolet Tahoe may be higher than 2020, due to an updated electrical system that simplifies upfitting, a redesign of the seats and an increase in cargo capacity due to the new independent rear suspension design.

A total of three communications factors are evaluated on a scale of one to ten and averaged among all the testers. The final score is the overall average of all three factors, including dashboard, trunk and engine compartment accessibility.

Blue Line magazine started publishing results of the Michigan State Police vehicle testing in 1998. Since then, we’ve seen significant changes in the design, capability and safety of police vehicles. There have been increases in performance, braking, handling and fuel efficiency.

We’ve seen the introduction of very capable hybrid power trains. More than 95 per cent of all the police cars sold in
Canada today are all-wheel-drive.

Officer safety is an increasingly important factor in the design of modern police vehicles; not just with upgrades but with the research that goes into the proper placement of gear and accessories that allow safe deployment of airbags in crash situations. When your office is on wheels and help may be a radio-call away, safety, durability, reliability and comfort cannot just be headings in a brochure. The 2021 police vehicles are the most mature, well-developed and well-designed police cars one could ever hope to drive.

Dave Brown is Blue Line’s firearms and police vehicle contributor, as well as the Best Dressed Police Vehicle Awards judge. He is a tactical firearms trainer and consultant based in Winnipeg. He can be reached at Dave.Brown@northwestlaw.ca.