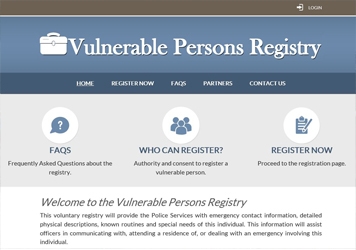 Many police investigations involving vulnerable persons, start-off slowly and are hampered by a lack of current or reliable information about the person. The Guelph Police Service (GPS) recognized these challenges in 2014 and began looking into creating a registry to cope with persons with autism. It was soon decided that the scope of the registry should include persons with many other vulnerabilities.

For the purposes of the registry, a vulnerable person is defined as a person who due to medical, cognitive, mental health or a physical condition may exhibit patterns of behavior that may pose a danger to that person. This condition may include, autism, dementia, acquired brain injury, cerebral palsy and other conditions that may cause the person to exhibit atypical behaviours including; wandering, physical instability, inability to communicate, aggression, irrational fear, oversensitivity to sensory stimulus (sounds, lights, touch) or other behaviours.

After discussions with some of their neighbouring police services, the Guelph Police Service discovered that the Waterloo Regional Police had already begun working on such a registry, and that its structure was different than what other police services had been using. After learning about the Waterloo Police Vulnerable Persons Registry (VPR), Guelph Police jumped on board and Waterloo Police eventually offered up the opportunity to other south-western Ontario police agencies to also join.

This free registry is open to caregivers of, and individuals themselves, who may be considered vulnerable in public situations. This VPR is a community-based initiative in partnership with the Waterloo Regional Police, Guelph Police, Stratford Police, Brantford Police and Bradford West-Gwillimbury/Innisfil Police. Each police service has many local community partners with which it works, which is key to the success of this registry.

In Waterloo Region they are partnered with their local chapters of KidsAbility and the Waterloo Region Family Network. The idea was to have these community partners manage the registry outside of police control. A problem other police services were having with similar registries was that they were running them in-house which created management and manpower issues, plus additional costs.

Guelph Police partnered with WINMAR and Community Living Guelph to help cover the costs of running the registry. They have a total of 11 community partners who are all working to ensure the success of the registry. Each police service has brought in community partners in the same fashion, as this was a requirement Waterloo Regional Police required of services wishing to join the collaborative.

One of the most critical factors in the long term success and sustainability of any registry is keeping the data current. To assist with this and to make management of the information easier, the registry sends out automated yearly requests to registrants asking them to update their information. If the registrant fails to update their information after three years they are is automatically purged from the system. This guarantees that all information is reasonably up to date and therefore useable by police when needed. The community partners are responsible for managing/assisting registrants, community outreach and promotion of the program.

The registry promotes sharing of information between the police and vulnerable persons and the people who support them. The registry information assists officers when they respond to calls involving the vulnerable person, by providing quick access to critical information about the person, such as; who to call in an emergency, a photograph and a detailed physical description, and any particular sensitivities that the person may experience. Registration is completely voluntary and can be implemented on a temporary or permanent basis depending on the individual needs of the vulnerable person. For security purposes, the registry data is sent through a secure FTP site to police services.

Waterloo Region has been up and running since July 2015. As of December 15, 2016, the new collaborative Vulnerable Person Registry has been live. Each service has access to all registrants within the registry which provides a wider coverage-area to assist police in providing positive and successful interactions and outcomes with vulnerable persons.

Michael Gatto is a constable with the Guelph Police Service who was involved in the development and implementation of the VPR. He can be reached at mgatto@guelphpolice.ca