Montréal is a city of culture and entertainment — always taking pride in its history, and its ability to keep up with the modern times. 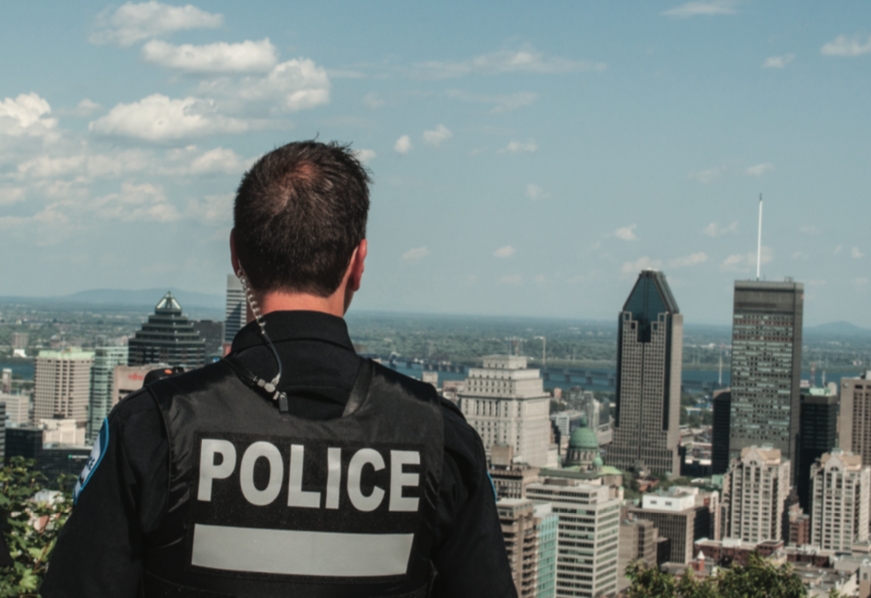 Quebec’s metropolis is a dynamic, unique place, with a hotbed of diversity — diversity in cultures and languages, diversity in the architecture and arts, diversity in beliefs and ideas. Its neighbourhoods offer unique lifestyles that deserve to be explored. The appeal and complexity of this major city lies on every street corner, in every park or alleyway, and whose warmth and friendliness are at the root of its international reputation.

The Service de police de la Ville de Montréal (SPVM) is a large-scale organization, a leader in its field and, like Montréal, diverse in its makeup and what it represents. Proudly serving Montréal, its primary mission is to protect the lives and property of citizens, maintain peace and public safety, prevent and combat crime, and enforce current laws and regulations.

As the largest city in Quebec and second largest in Canada, with close to 2 million inhabitants, Montréal is also a great place to live. It is a place where people feel safe. In 2015, The Economist ranked Montréal as the second-best city in the world to live in, while a poll conducted by Mercer ranked Montréal among the five cities offering the best quality of life in North America. In 2016, Montréal was also named the top university city, ranking number one on the list of the 100 most sought-after cities by students, according to a poll conducted by the Quacquarelli Symonds (QS) research institute.

Watching over Montréal and playing an essential part in the city’s events are SPVM police officers, who play a key role in its citizens’ quality of life.

“The SPVM’s strength lies in the engagement of all its members to carry out their mission and through their passion for assisting and serving citizens,” says SPVM Chief Philippe Pichet. “This passion is what drives us to ensure the safety of Montrealers everyday.” With nearly 6,000 employees, including more than 4,500 police officers, namely in its 32 local police stations, its four operational centres, its specialized investigation centre and its headquarters, the SPVM is the second-largest municipal police department in the country and eighth largest in North America.

It is estimated that Montréal police officers conduct 3,000 to 4,000 interventions daily, or a total of one million interventions annually. Each and every year, emergency call operators take almost 1.2 million calls, among which more than 400,000 are dispatched to police officers. Montréal peace officers also act as public order officials in more than 1,200 events, including neighbourhood parties, hockey playoff celebrations and many festivals that mark the passing of each season in Montréal. Despite all of these events and this activity energizing and bringing the urban landscape to life, Montréal, mostly, remains a peaceful place, where countless people — tourists, students and families — converge in the streets and parks.

Keeping an eye on crime trends
For more than 20 years, crime has been on a downward trend in Montréal. Moreover, in 2015, the SPVM recorded the smallest number of infractions and offences — 86,640 — to be reported within its jurisdiction since 1980. Crime seems to be on a dowwnard plane — and although this is not exclusive to Montréal, the work of police officers in the city is increasingly complex and citizens’ expectations of them are increasingly high.

Experts agree that this drop in crime could be explained by several factors. It’s quite possible that crime as we know it today is in mutation. The surge in cybercrime and rise in crimes like online scams, identity theft, production and distribution of child pornography, human trafficking and cyberbullying, at the expense of more traditional crimes, suggest that crime is transforming.

This reality poses significant challenges for police forces. These new types of crime, sometimes committed in several geographic locations at a time, mean that police officers need to develop new skills in conjunction with their partners, namely their colleagues from municipal, provincial and national police forces. Aware of this reality, the SPVM continuously seeks to foster the development of technologies and analysis tools to better respond to these new challenges and to more traditional public safety issues, such as road safety or crime associated with organized crime and street gangs.

Adapting to social realities
In a major, constantly evolving urban centre, police officers must deal with increasingly complex issues. In Montréal, the mosaic of social realities has an impact on the work of its police officers. During their encounters with the public, they need to contend with a diversified and aging population as well as a multitude of economic and social conditions. The Montréal police force comes in many forms: a police officer on a bicycle downtown, intervening in a conflict between a homeless person and a merchant; a community officer from the West Island visiting an elementary school to speak about bullying; a patroller in the south end of the city, meeting with an imam whose mosque has been covered by heinous graffiti; and an investigator recording the statement of an elderly lady, who has fallen victim to a phone scam.

SPVM police officers come face-to-face with today’s social realities on a daily basis. They intervene among people with social and mental health issues many times per day. These interventions, often recurring, are the daily reality of patrollers and investigators. They force police officers to go beyond their more traditional law enforcement duties.

In the face of complex issues such as these, the SPVM has set up co-ordinated response teams, in partnership with mental health and social care workers. Over the years, these intervention models have proved effective in the face of recurring social issues, such as homelessness and mental health issues.

The Équipe mobile de référence et d’intervention en itinérance (EMRII) is a good example of these response teams. The EMRII is a team of health-care workers from the Centre de services et de santé (CSSS) and SPVM police officers. The team carries out local work to reach the homeless or those at risk of becoming homeless who are often involved in police interventions, and then refer them to the appropriate services in order to promote their reintegration.

The Équipe de soutien aux urgences psychosociales (ÉSUP) is another success story. It is also comprised of SPVM police officers and social workers patrolling in mixed teams and intervening directly with individuals in crisis situations or who are mentally ill. The team is dispatched by 911 agents who receive an emergency call or called in by police officers working on the scene of a distress call concerning a mental health issue. The team’s work consists of supporting police officers during interventions and referring them to the appropriate services (e.g., legal, health or community support).

The community police model
With its 19 boroughs and 14 linked cities, Montréal is a blend of several living environments. Each sector is unique, with its own attributes and identity. Residents have specific needs and concerns and are often very attached to their borough and neighbourhood. The SPVM police model is ideally suited to this Montréal reality. Officers from neighbourhood police stations are also assigned to very specific sectors of the city. They are familiar with their sector’s realities and adapt to these to better meet the expectations of the citizens actively involved in their community.

In 1997, the SPVM adopted a new police model, Neighbourhood Policing. It is a neighbourhood police station model based on community policing principles that places the public at the heart of its concerns and its organization. The 32 neighbourhood police stations (PDQ) of the SPVM are spread across the entire territory and provide services to the local population they serve. This proximity to the community allows for a better understanding of citizens’ needs in terms of safety and for a targeted, effective response. The successful implementation of this model is dependent on building ties with the community and being accessible. Work methods adapted to each setting are needed in addition to much creativity and originality.

Neighbourhood police stations regularly hold in-house activities to meet with citizens or resolve specific issues. For example, last summer, police officers from Station 45, in the northeast end of the city, held a Popsicle activity to respond to a very specific need. The police officers were finding it difficult to meet with residents in a sector of their territory that was experiencing certain problems. During several hot summer days, the police officers set up camp in a park and invited individuals — young and old — to have a Popsicle with them. By way of this simple gesture, police officers were able to break the ice, make initial contact and talk to people.

Elsewhere, at Station 15, in the southwest corner of the city, a project was set up to allow police officers to intervene with road-safety issues. Each work team from the station was asked to sponsor a high-accident intersection in the sector. Sponsors therefore had to pay special attention to their intersection and provide a certain level of visibility to the residents of that area. This recurring police presence was used to encourage residents to adopt safer behaviours and increase their vigilance as they approached intersections.

A police service focused  on the future
While the Montréal police’s 175th anniversary is approaching, the SPVM is an organization focused on the future. The development of technologies, easy travel, crime that increasingly knows no borders, the phenomenon of radicalization, and emergence of hate crimes are all realities Montréal police officers need to contend with, in co-operation with its many partners.

Nowadays, it is essential for the different levels of police forces to work together. Every player in the public safety network, at the national, provincial or municipal levels, must play a complementary yet coherent role with one another to adequately tackle these issues.

Proud of its achievements and propelled by a will to continue to improve its practices and develop its expertises, the SPVM has adopted a strategic plan that will enable it to build the foundations to ensure its longevity by the year 2020.

Pichet is convinced that Montréal police officers will be proud to belong to an organization that has been able to continue to adapt to its environment and to develop technologies and new ways of meeting citizen needs.

“The work of Montréal police officers is increasingly complex,” says Pichet. “They must contend with a constantly evolving environment. I admire the work done by our police officers every day in the field, in light of all these challenges. A police organization of the scope of the SPVM needs to adapt to the society that surrounds it and we are giving ourselves the tools to accomplish this.”