Features Technology
The next innovative step in law enforcement training 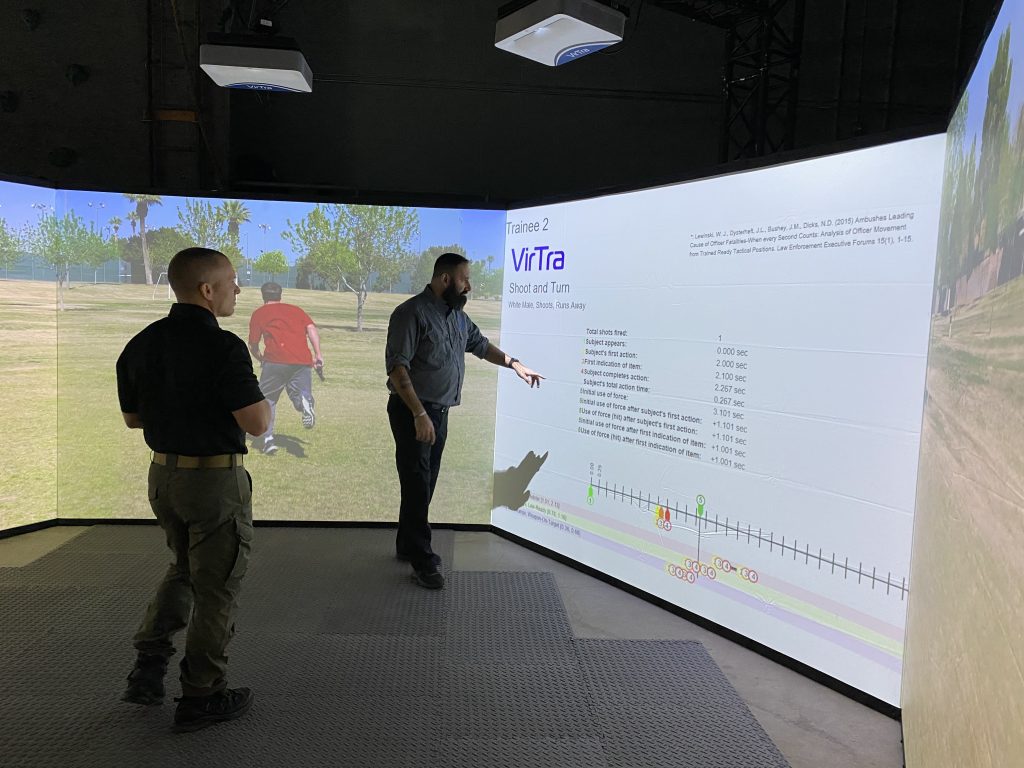 T.J. Alioto, SME, breaks down a simulation to an officer during the demonstration in Toronto. Photo credit: Brittani Schroeder

Members of law enforcement are in a constant state of learning and training. The question is, how can police departments transform their training to ensure their officers have the proper skills to better serve their communities?

Companies like VirTra have been working on innovative technologies to support training initiatives in law enforcement. One such product is the V-300 4K simulator. Shortly after the events of 9-11, the simulator was conceptualized. A team of engineers, content creators and software developers have spent years researching and implementing strategies to ensure realism and improve the technology annually. During a demonstration at Toronto’s Emergency Task Force (ETF) headquarters, Blue Line tested the simulator in person, alongside members of the EFT, and learn more about this technology.

The V-300 4K is a five-screen, 300-degree immersive simulator that displays scenarios in 4K resolution, allowing police and recruits to be further immersed. The simulator replicates human visual acuity by combining five laser-based 4K projectors and scenarios filmed in 8K. This is important because officers can now train to recognize subtle visual cues due to the reproduction of lifelike situations.

The simulators also work with laser-based drop-in recoil kits and CO2 magazines, allowing officers to practice with their own duty weapon within the simulator. This also holds true for their TASER/CEW device, OC spray and more.

Although the simulator and CO2 magazines cannot replace live fire, they are designed to supplement it, and studies have shown that the skills learned within the simulator transfer to the field. The study stated: “Researchers assessing firearms and tactics simulator training have found that the training appears to be beneficial in developing skills that are arguably the most important for the safety of the officer and others, i.e. accuracy, effective use of cover, avoiding the unintentional shooting or endangering of innocents and ensuring the shooting is justified.”

The simulator can also replace or supplement role playing, simunitions, classroom lecture and TASER training. The lessons taught provide an opportunity for cognitive learning and most any training tactic can use VirTra as a supplement – and in some cases, a replacement.

With proper practice, officers will be better equipped to handle a wide range of incidents confidently and effectively.

A new way to train

Law enforcement members can train on any skill from verbal de-escalation to ballistically accurate marksmanship practice on a virtual range. Video scenarios include active threat, high-risk vehicle stops, mental illness, courtroom security and more. Each scenario is controlled by the instructor and includes a variety of branching options towards resolution.

“Our goal is to provide different ways for officers to apply and hone their skills. During each simulation, as an instructor I could make the suspect in the simulation escalate in temper based on what the officer is doing, or I can keep the suspect calm. I control the scenario from a computer just outside the simulation,” said Tanner Layton, International Contract Fulfillment Manager with VirTra. During the demonstration in Toronto, the system had over 369 different scenarios that could’ve been played out. “Every scenario that we have has two types of branches on it. You have an instructor-driven branch, like the buttons that I was choosing, and then you have training-driven branches based on what the officer or trainee is doing inside with their use-of-force options.”

The accurate replication of situations that police officers may encounter in the field allows them to practice a variety of skills within a safe environment with effective skill transfer. Rather than just being ‘video game’ style training, the superior quality allows trainees and seasoned officers alike to take the training seriously.

With proper practice, officers will be better equipped to handle incidents confidently and effectively. Every scenario is created and vetted by VirTra’s in-house subject matter experts to ensure they are receiving the best training possible without receiving training scars from improper teaching. Then, each agency customizes it to fit their policies and procedures.

Law enforcement agencies around the world have seen a difference in officer performance and de-escalation techniques since adopting simulator training.

“When we’re creating training scenarios, we aren’t just creating it for any one agency. We’re creating them for agencies in the U.S., Canada, Mexico, Egypt, Saudi Arabia, you name it. We have to make scenarios that will work in as many different agencies as possible,” said T.J. Alioto, a subject matter expert at VirTra. “The instructor chooses the branches of the scenario that will play out based on the officer’s choices during the simulation. Depending on where they are located, an officer in California may choose one option and an officer in Vancouver may choose a completely different option in the same scenario. The officer will react based on the training they’ve been given, and we must make sure we’ve created enough possible branches of outcomes that they can continue in the simulation. I mean, it’s really like Pandora’s box, the more you branch out in each scenario.”

Five agencies in Canada use a VirTra simulator to train their officers. After obtaining the simulator in early 2020, the agencies invited reporters for a demonstration and showed media the system’s capabilities and ability to function as much more than just a “shoot-don’t-shoot” tool.

“There may be an impression out there, that this type of training is about police learning to shoot accurately, in a high-pressure situation. While that’s important, it’s not actually our priority,” said Delta police Deputy Chief Norm Lipinski. “Really, what’s vital for us, is that the simulator gives officers the chance to practice decision making. It’s decision-making practice, not target practice.”