Features
The myth of the ‘21-foot’ rule

Is it true that you “don’t bring a knife to a gunfight?” Have you ever practiced any “Tueller drills” or discussed the “21-foot rule” in firearms or use of force training for when people actually do bring knives? 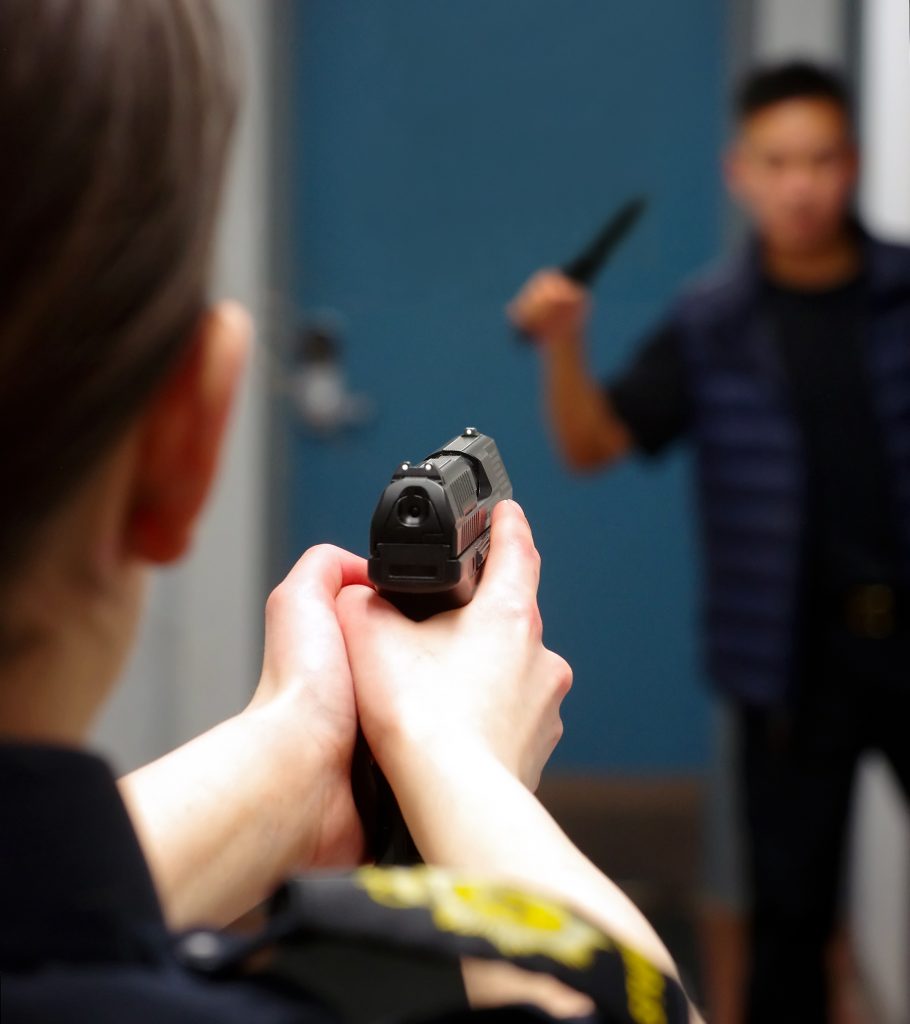 Originally designed to help officers think defensively and develop a better level of tactical awareness, the 21-foot rule was intended to illustrate the distance that an assailant could cover with an edged weapon before an officer could respond with a holstered sidearm.
The problem is that widely-taught drills developed from that original concept may have reinforced a big myth: “If someone has a knife, and they’re within 21 feet, you can shoot them.”

Wrong. The 21-foot rule was never intended to become a firm rule of behavior. Drills performed without a better understanding of the background behind them, or without knowing more about the performance of the human body in a life-threatening situation, can confine officers into thinking there is only one solution to every deadly force confrontation.

We would like to take a closer look at the background behind these drills and the science behind the action/reaction curve. We need to rethink the concept that situations involving edged, or other contact weapons, can be slotted into hard and fast rules or can be used to justify shooting a person with a knife closer than 21 feet.

Tueller Drills
In a 1983 article for SWAT Magazine, titled, “How Close is Too Close?” Sergeant Dennis Tueller of the Salt Lake City Police Department examined how far away an assailant with a knife would have to be for an officer to be able to respond to a sudden deadly force attack by drawing and firing their sidearm. He timed volunteers to see how far they could cover certain distances, and timed how long it would take the average officer to draw and fire from the holster. The distance he focused on was seven yards (21-feet), and how an armed assailant could cover that distance in 1.5 seconds; not enough time for the average officer to draw a holstered firearm and fire two accurate shots to centre mass.

In his series of informal tests, Tueller illustrated how the danger zone of an edged weapon can be further than many officers realize. He went on to write, “it would be safe to say then that an armed attacker at 21 feet is well within your Danger Zone.”

The article evolved into a training video and training exercises variously called “the 21-foot rule” or “Tueller Drills” in police academies across the U.S. Officers would practice charging at each other with simulated knives and compare that to the time it took to draw and fire two accurate rounds.

Officers are human beings, doing the best job they can with the circumstances they are confronted with and the training they have been given.

The Myth of the 21-foot Rule
Sgt. Tueller opened a lot of eyes about action versus reaction, and helped revolutionize police training, but his studies may have been misinterpreted to justify shooting an assailant at a certain set distance. The 21-foot rule became part of police culture, and has been widely taught at law enforcement seminars in the U.S., but to our knowledge has never been recognized by a court in Canada. Other studies done in Canada have even suggested the action/reaction gap might be further than 21 feet.

We see problems with these types of simple drills, that are designed to encompass complex and unique situations.

Firstly, in the real world, few people yell, “go!” or attack with a clearly visible knife. The 21-foot rule is a response to a known threat, and attackers rarely openly display weapons. (During in-service training over a period of a number of years, an informal survey of Winnipeg Police Service members who had been stabbed revealed that almost none of them saw the weapon in advance.)

There are many other weapons besides knives that can cause grievous bodily harm, and a good spontaneous assault program that emphasizes prevention, avoidance and awareness should broaden the focus to include “contact weapons” and not just edged weapons.
Secondly, when some officers have performed these drills, they usually stop when the “assailant” reaches the officer or when simulated shots are fired. This goes against lessons on survival we have tried to teach for many years. Out on the street, not everybody comes to a halt because they’ve been stabbed. (They rarely even realize they have been stabbed until the smoke clears.) Similarly, highly-motivated assailants generally don’t suddenly go down because they’ve been shot.

The Reactionary Gap
The reactionary gap is the distance between an officer and a subject that will allow him or her enough time to respond to a sudden and unanticipated attack. The reactionary gap is a suggestion and not a rule because there is no “standard” distance. Skills vary, and defensive tactics often dictate that officers move closer and not farther away in order to better gain control over subjects.

Most officers are familiar with tunnel vision, and its detrimental effect on peripheral vision in high-stress situations. Tunnel vision is a physiological reaction of the human body to a life-threatening situation, and serves to enhance focus at the center of vision, at the cost of loss of peripheral vision. Since the brain is not wired into recognizing that the center of vision is suddenly sharper than normal, it perceives threats as being larger than normal or closer than normal. (Soldiers and police officers who have stared down the barrel of a gun have sometimes described the threat as “the size of a sewer pipe.”) This is why it is difficult to judge exact distances in life-threatening situations.

In threat assessment, we continually evaluate three factors: threat, intent and delivery system. It is in the delivery system that provides subjects with imminent opportunity to apply damaging effects of a weapon on an intended victim using distance, position, lethality and other factors.

Create distance. In an encounter, distance equals time. The more distance you can put between you and a threat (excluding firearm threats) the more time you have to respond. Distance buys you time. Distance is your friend.

Move laterally. Sidestep. It is a normal reaction to a threat to backpedal and move straight back, but this can be a fatal mistake. It is highly unlikely you can run backwards faster than an attacker can run forwards. Moving back in a straight line is likely to be totally ineffective. You also can’t see where you are going and the likelihood of banging into something or tripping over an obstacle is much higher. By moving laterally, the subject has to redirect his momentum and body mass toward your new location that buys you time, even if it’s just an extra second or two to draw your gun from the holster.

Use barriers. Barriers are intended to slow down or block the subject’s access to you or an intended victim. It can also buy you more time to possibly de-escalate or disengage from the encounter. A barrier can be substantial like a fence, door, or vehicle likely to block access, or as simple and temporary as pushing over furniture in the path between you and the offender.

Draw and point firearm. Clearly you are justified in drawing and pointing your sidearm. Don’t hesitate. Based on the essence of the 21-foot rule, you run the risk of not being able to respond in time should the offender suddenly commit to an attack. The value of Tueller’s research is that action always beats reaction, and an assailant can attack from a greater distance than was once thought possible before you have enough time to draw your gun from the holster, acquire the target, and discharge accurate shots in time to stop the threat. Drawing and pointing a firearm is also a show of force that may discourage the offender from wanting to complete the act and run the risk of being shot.

Issue a loud and clear challenge. A forceful challenge, backed up by a firearm, and loud and clear enough to penetrate through an assailant’s auditory exclusion (loss of hearing in high stress situations) may be sufficient to discourage the assailant’s desire to continue their aggressive actions. It also indicates to other officers that your firearm is out, and may be crucial in justifying an extreme level of force, such as deadly force once you preclude lower levels of force as being ineffective or inappropriate. If you have an opportunity to challenge the offender before administering lethal force (gunfire) you are legally and morally obligated to do so. This is also where training in de-escalation techniques, and using words to more effectively defuse situations of human beings in crisis can be especially valuable.

So How Close is Too Close?
The 21-foot rule is, in essence, an interpretation of threat assessment. Is there a weapon? The 21-foot rule is not relevant or activated without the known or believed presence of a deadly weapon, usually assumed to be an edged or contact weapon sufficient to cause death or grievous bodily harm. Is there Intent? The officer must believe that the subject intends to attack a person with that weapon. Is there delivery system? Does the officer believe that distance, position or other factors provide the subject with the legitimate and imminent opportunity to apply damaging effects of that weapon on the intended victim?

Can an assailant with a knife or other deadly weapon hurt me or someone else from where they happen to be located right now? Not if I shoot them first, incapacitating the threat in the process. Not if I get behind something that protects me. Not if they change their mind because I make it clear I will shoot them if they advance.

Primary response tactics are designed to increase the reaction time of the officer, slow down the attacker, demotivate the attacker, and/or slow or hamper the delivery system.

By implementing the primary response tactics, the 21-foot rule becomes redundant. Every encounter is as individual as the assailant holding a deadly weapon. This means that the gun does not become the solution to every potentially deadly force situation. The gun is only a tool. The mind becomes the weapon.

Life is not a Hollywood movie. There is no such thing as a fair fight, and assailants don’t politely stand around in circles. Gang members don’t carry sharpened screwdrivers to tune tiny little carburetors for their grandmothers. There are no hard and fast rules in life for every situation. Officers are human beings, doing the best job they can with the circumstances they are confronted with and the training they have been given.

Train hard, always maintain a level of tactical alertness on the street, watch for barriers you can use and be aware about danger signs involving contact weapons. If spotted early enough, such deadly confrontations might be defused or avoided altogether.

After all, the best gunfight in the world will always be the one that never happens in the first place.