Features
The evolution of a new school resource officer program 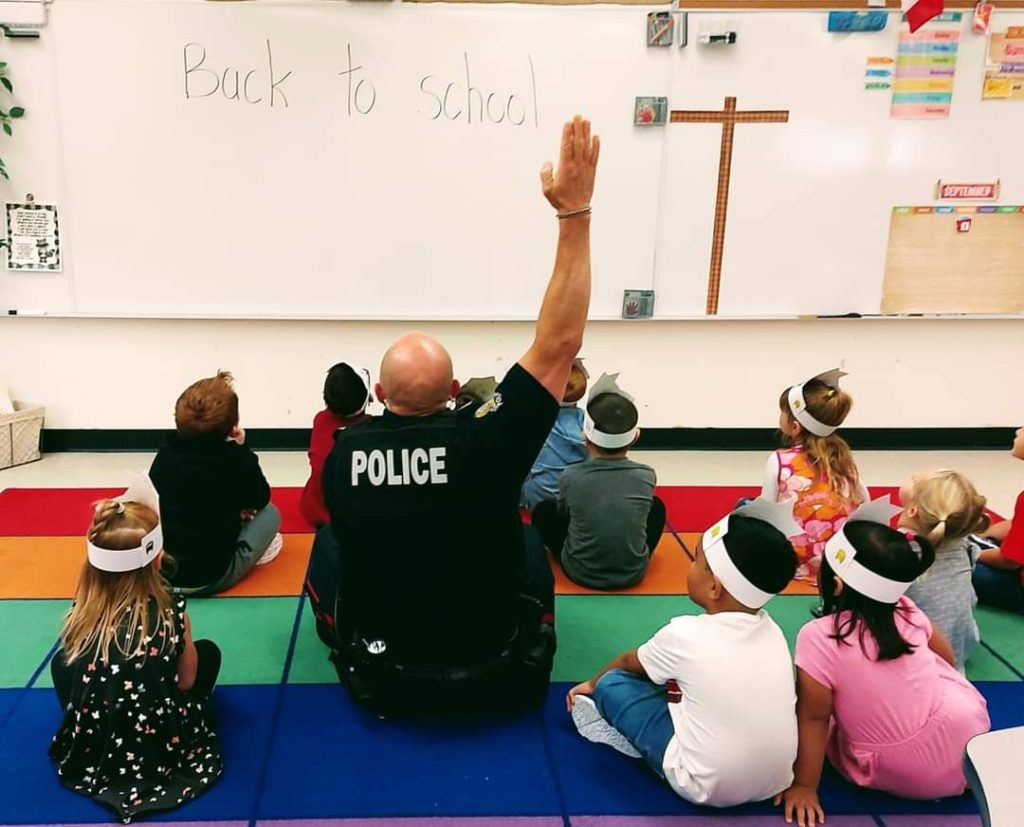 Since 1996, the CaPS has employed a full time SRO to serve all 10 schools in the city, which includes roughly 3,500 students. Much like other programs across Canada and the U.S., the SRO was responsible for the delivery of the D.A.R.E. (Drug Abuse Resistance Education) program to grade six and grade eight students, in addition to coordinating safety activities and managing any issues that developed in any of the schools. The SRO was also assisted by a number of D.A.R.E. instructors, who were each assigned a specific class; in addition to their regular duties, these instructors would assist in delivering the program to classes throughout the school year.

Over time, the SRO program was very well received in the community, and most certainly strengthened relationships between the CaPS, school staff, parents, and the students themselves.

Nearly two decades later, it was recognized that although the principal concepts of the D.A.R.E. curriculum were beneficial to students, the program itself was becoming increasingly challenging to find training opportunities for instructors. In recognizing that it was time for a change, the current CaPS SRO, Cst. John Fernhout, took the initiative to build a brand new, custom-made SRO program for the Camrose community. Cst. Fernhout is a recent recipient of the Alberta Association of Chiefs of Police Award of Outstanding Service.

After conducting a scan of what the SRO landscape was and consulting with various school stakeholders, Cst. Fernhout developed the foundation for the new program: ‘C.O.R.E.’. Through his research and experience, Cst. Fernhout was able to take the concepts that have been effective and valuable over the years, create a versatile and modern program, all while ensuring that it was in alignment with the Alberta Health curriculum for students.

C.O.R.E. is an acronym used for the four areas that youth can look at to strengthen their core (body/mind/spirit) and help others around them:

C – Caring for self and others in healthy and responsible ways.

R – Relationships with self and others based on respect and trust.

The C.O.R.E. Program revolves around one basic concept: youth who serve the communities around them in healthy ways will be motivated to make safe and healthy choices in their own lives.

As was found with D.A.R.E., it was valuable to have a mascot to rally around to support all the fundamentals of the program. When considering what a good representative would be for C.O.R.E., the CaPS landed on a Canada goose. After a bit of research into the issue, it was recognized that Canadian Geese demonstrate a number of leadership and community-based ideals. However, as it was found that a Canada goose has limited appeal for the students, it was agreed that “Cobra Chicken” would be a slightly more appropriate and fun symbol for the program.

With the artistic submission of a local grade six student, Cornelius the Cobra Chicken was enshrined as the inaugural mascot of C.O.R.E.

Curricula and workbooks for grades three and six were developed in addition to some framework for instruction at the grade nine level. Cst. Fernhout piloted C.O.R.E. at the start of the 2019/2020 school year, and after receiving feedback from students and staff, he was able to make some tweaks and lock in the new program. This included designing a logo, establishing the C.O.R.E. decision making model, developing a standardized seven-lesson plan with the “7-C’s” for each plan, creating a cheer and point system. In addition, a final project was developed to cap off the celebration of completing the C.O.R.E program for each class.

Despite the challenges of the global pandemic, the SRO was still able to deliver the C.O.R.E. program to a total of eleven grade three classes in five schools, and eleven grade six classes in four schools. The school year concluded with a very successful community project where students authored letters of gratitude to several businesses and organizations throughout the city, showing their appreciation for everything they did for people during the pandemic. Cst. Fernhout made a point to hand deliver these letters all around the community, which resulted in a lot of smiles, and some tears of joy.

Moving forward, in an effort to maximize the level of positive interaction between the police and the school community, a number of front line members are in the process of being trained as C.O.R.E. instructors, to gain some exposure to the local schools, and assist the SRO in the delivery of the program.

In light of recent news stories that several SRO programs across Canada and the U.S. were being reviewed, suspended, or outright cut, a survey was conducted in 2021 to gather some feedback on how the program was being received by students, parents and staff in all of the schools. The survey results showed that the program was overall quite valued and supported. Some of the highlights from the survey include:

In today’s age, there has never been more scrutiny on the police for performance, accountability and fiscal responsibility. Additionally, there has been a paradigm shift in terms of what the public’s expectation of the police is in the community. On top of investigative and emergency response requirements, police are being challenged to deploy more collaborative and proactive strategies to attain better outcomes for all involved. In Camrose, the SRO Program and the launch of the C.O.R.E. curriculum has been successful in being able to build meaningful, long-lasting partnerships, enhance overall safety in schools, and provide important, community-focused instruction to local youth.

The CaPS continue to look forward to promoting and growing their School Resource Officer program, as the long-lasting impacts on the local youth have proven to be an essential part of their organization’s mission and vision.

John Corbett, is a 19-year veteran of the Camrose Police Service and currently serving as the Operations Support Inspector. After spending time working and supervising teams in the Patrol and Major Crimes Sections, John took on the role of overseeing the support branch of the Police Service, which includes the School Resource Program, Police and Crisis Team, 911 Communications Centre.