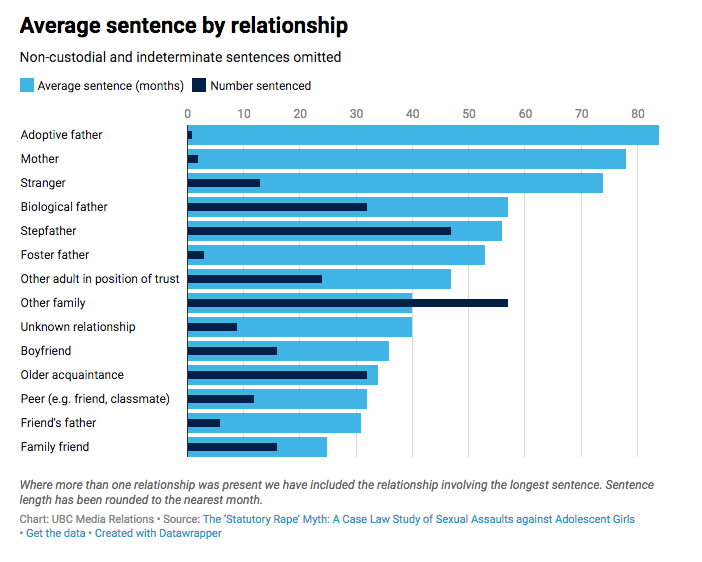 A study of three years of Canadian case law involving sexual offences against adolescent girls from the ages of 12 to 17 demonstrated that men accused in these cases were, on average, 19 years older than the complainant. Almost half the girls reported sexual abuse by a male family member.

The researchers from the Peter A. Allard School of Law at the University of British Columbia believe their findings undermine the “statutory rape myth:” the idea that age-of-consent laws lead to the prosecution of large numbers of young men for engaging in sexual relationships with younger teenage girlfriends.

“These were not young boyfriends engaging in sex where girls agreed to participate. These were cases of devastating abuse by male adults in positions of trust, and family members in particular,” said Professor Isabel Grant, who co-authored the study with Professor Janine Benedet.

“With respect to age of consent, these are not cases where 14- and 15-year-old girls have agreed to engage in sexual activity with someone who’s 22. They are cases where she did not agree, or was coerced, and he’s 40. That’s a much more typical scenario,” Benedet added.

The researchers examined 680 written decisions from every province and territory from 2014 to 2016 where the complainant was a girl of at least 12 and no older than 17. These judgments involved 518 accused persons and 625 female complainants. Six of those 518 accused were women and the remaining 99 per cent were men.

These cases did not include jury trials or guilty pleas unless there were written reasons for sentence. And of course, they did not include the many sexual assaults that never make it to the prosecution stage.

“Our study involves only the tip of the iceberg. The cases that make their way through to a completed prosecution—whether convictions or acquittals—are the exception,” said Grant. “One of the things that was alarming for us was just how many cases we did find, and knowing that this represents only a tiny proportion of how many sexual assaults are actually taking place against this group of girls.”

Among the cases that made it to prosecution:

While the #MeToo movement has brought greater public attention to sexual assault crimes in recent years, the UBC researchers note that sexual assault within the family has escaped much of this attention.

“The family is an institution of enormous power, and the opportunity for abuse of that power—for enforcing secrecy—is really stark. The barriers to coming forward in the family context are very high. So, we think that deserves more attention than it’s currently getting,” Benedet said.

The study, funded through the Social Sciences and Humanities Research Council and the Law Foundation of B.C., was published in November 2019 in Canadian Journal of Women and the Law.