Features
Stronger together: An integrated approach

When Halifax Regional Police (HRP) Chief Jean-Michel Blais retired as the chief superintendent from the RCMP Halifax District back in 2012, he didn’t go far. In fact, he just moved over to a neighbouring office about 10 feet away to take the reins of HRP. 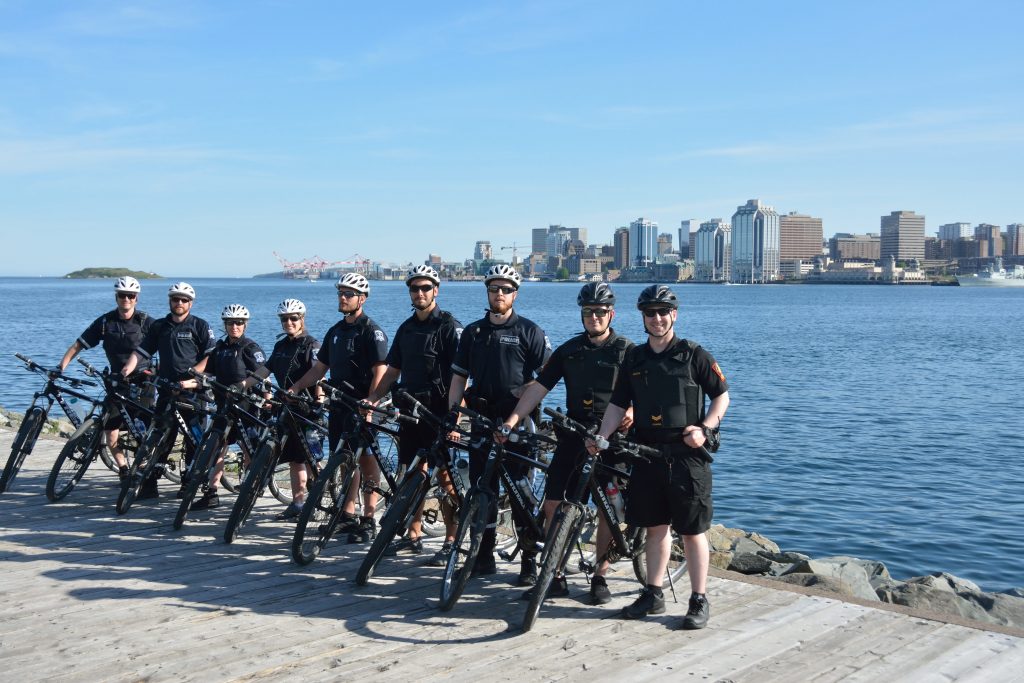 Members of HRP and the Canadian Armed Forces Military Police in bike training at Halifax Harbour.

“It was the most significant promotion of my career and yet the shortest transfer of my career,” he jokes.

Nonetheless, it highlights the close ties between the two forces that makes policing in the coastal metropolis so collaborative and resilient.

Integrated strategy
HRP has transformed over the years from a midsized service to being “truly a modern police service that serves as the reference for policing in Atlantic Canada,” according to Blais. And it hasn’t done that alone.

In 1996 a number of urban and rural communities were amalgamated to form the Halifax Regional Municipality (HRM). Likewise, the stand-alone Halifax, Dartmouth and Bedford police departments fused into the HRP. The local RCMP detachment continued on with its responsibility for the county portion of Halifax. Currently, it is the largest RCMP jurisdiction east of the Rockies.

“It was decided that HRM would ensure the two police services were integrated as closely as possible,” Blais says. “Several studies were carried out and it was found that the best model for integration was with regards to criminal investigations at the higher level, so the homicide units, sexual assaults units, fugitive offender units and the like. It was determined we would take about 30 RCMP investigators along with about 90 HRP investigators and put them into one unit, which is known as the Criminal Investigative Division.”

The officer in charge of that division is an HRP superintendent and the second in command is an RCMP inspector. This means a homicide case in downtown Halifax can have both HRP and RCMP investigators attending, and likewise with incidents in the county.

“On the frontline, we have a very flexible approach where at any given time, we have either an RCMP or HRP senior officer who is the duty officer. If there is an issue in either of the jurisdictions, whoever that officer is will be the first line to answer,” Blais continues. “We work with the RCMP on almost an hourly basis.”

Both agencies have the same integrated emergency services (i.e. the dispatch centre), which helps with efficiencies and ensuring enough police support is sent to an area in need.

The working relationship between the two organizations is something that should be highlighted more, according to Halifax District RCMP Chief Supt. Lee Bergerman.

“Regardless of what uniform they’re wearing, the goal is the same and we’re all here for the same reasons — to prevent and solve crimes and ensure public safety. That’s what brings us together at the end of the day. There’s always the friendly competition and the ‘big red machine’ talk but when push comes to shove, no one is looking at the colour of the stripes.”

This was illustrated in Moncton, N.B. during the 2014 shooting rampage that left three Mounties dead.

“RCMP District Halifax went to assist in the shooting and many HRP officers also went; they were able to expand with ease as we are using the same records management system,” Bergerman says.

She notes another example this past May when Mounties were responding to a dangerous situation involving a loaded shotgun in Cole Harbour, N.S. HRP officers were listening to the same call and able to back the Mounties up.

“Overall, it works very well,” Blais says of the integrated model. “We see a friendly and robust competition of ideas to better deliver policies and procedures… I look at our strategic communications unit and I’ve seen it grow in the years I’ve been here thanks to bouncing ideas off the RCMP and vice versa, and one side coming up with ideas that were replicated and improved upon on the other side.”

Additionally, as the body policing a substantial port city home to the Atlantic fleet of the Royal Canadian Navy, HRP is in close contact with the local military authorities.

“They are an important stakeholder in the work we do and we work with them on a regular basis,” Blais notes.

Honing such a tight level of co-operation broadens the region’s overall law enforcement perspective, strengthening crime and problem-solving abilities, Bergerman adds. She notes how in her past experiences with cold cases she has witnessed firsthand how crucial it was to have the local police department on board as part of the team.

“In Halifax policing, you have the local perspective with HRP, but you also have the provincial and national perspective with the RCMP and the resources that come with that, such as national security teams, human trafficking teams,” she says. “I can get an expert here out of Ottawa quickly if we need to, for example, whereas some municipal police forces wouldn’t have access to these types of tools.”

Learning curves
That’s not to say this type of “league joining” didn’t come with its fair share of headaches and growing pains at first.

“We are two different police services,” Bergerman says. “Our policies are similar but they’re not the same. We have a different requirement for our exhibits and record keeping for example and some of that can be a challenge as we have to ensure we’re adhering to our policies, even as we adapt to some of HRP’s processes.”

Moreover, the RCMP works off of a platform called PROS (the Police Reporting and Occurrence System) whereas HRP works off of Versadex.
“It was determined we’d all work off the Versadex system,” Blais says, “so it was a process getting that in there, though a lot of the nomenclature was common to both services.”

Budgetary decisions that sometimes require feedback from the RCMP’s national headquarters was also something new to navigate, Blais adds, but the “forward-looking approach of the employees of both services as well as the local politicians and municipal staff” cleared the hurdles in the long run.

Change from within
Integration wasn’t the only modernization HRP undertook in past years. In 2016, it hired Chris Giacomantonio for a brand new civilian role within the service, HRP’s own research co-ordinator. His mission is to enhance policing practices and procedures as well as foster research opportunities between the police and community.

“What he has brought to this organization has been truly a data-driven and evidence-based approach when it comes down to all of our decisions,” Blais says. “One of the things we try to avoid is groupthink or situations where we have one individual coming down from Mount Olympus to force their decisions, i.e. the chief.  We have a very collaborative approach that renders the best decisions possible.”

This is one of the biggest changes from within HRP has seen in the last five years, according to Blais.

“It may not be as perceptible to those outside, but it’s allowed us to make better decisions and that has obviously changed how we do our investigations, how we have avoided some tragedies and our community engagement.”

Relationships that last
Speaking of engagement, Blais says he’s strict about his definition of community policing because it’s such a vital component of what HRP does.

“A lot of people think of it as a police officer going out and playing basketball with kids. No, that’s police/community relations. It’s actually police getting together to be able to build a basketball court, to help with those relationships.”

To that end, HRP has taken a page out of the game books from forces such as the RCMP, Vancouver and Calgary, and established the Halifax Regional Police Foundation about six months ago.

“Our expectation is to be able to provide auxiliary funding for some of these types of community projects that would not normally come out of the police or municipal budget,” Blais says. “This is a direct result of having our ears to the ground and being fully engaged with the community.”

Community policing is one of HRP Central Division Cmdr.-Insp. Dean Simmonds’ biggest passions. Simmonds was one of the members who implemented the Community Response Model at HRP in 2006, a step that remains one of his most memorable moments.

“It was amazing because it had been difficult for me to wear my uniform and be me. The kids, for example, knew me from coaching in the city, but when I put my uniform on, they didn’t really know me. This was an opportunity to see that Police Officer Dean is actually Dean,” Simmonds says of the community response role. “It gave me an opportunity to mentor, but to also sit down and listen to the elders and their stories. And then to take that all back to our organization and encourage others to do the same.”

In big cities, it’s easy for police officers to become faceless, he adds. “With the number of calls for service increasing in complexity, I think community policing is a mechanism by which we return to the roots of policing — engagement and creating trust.”

Community policing allows officers to have a better understanding of the diverse communities they serve, Simmonds continues, and allows them to then advocate within the department for policy changes that may be needed.

Members of HRP and the Canadian Armed Forces Military Police in bike training at Halifax Harbour.

Diversity matters
In 2016, the CBC released a survey revealing there was only one major city in Canada with a police force that “matches or surpasses” its community’s racial diversity — Halifax.

While it’s important to point out that Halifax isn’t as diverse as some other major urban centres across the country — 11.6 per cent of the general population is non-white, according to the latest census, and 12.1 per cent of HRP officers are either Aboriginal or visible minorities— Blais says he’s proud of the many vibrant cultures in the city and the representation of the Acadian and African Nova Scotian communities, among others, on the force.

It wasn’t always like this; when Simmonds was growing up in Halifax, he didn’t want to be a police officer because he didn’t think it was attainable.

“I never saw an officer that looked like me in my neighbourhood,” he explains.

HRP has been working hard to promote diversity recently, with Simmonds heading recruitment efforts. When recruiting ramped up in April of this year, he notes the mission was to attract applicants who respect diversity.

“It’s important for me to be out there recruiting and having those difficult conversations with community members — to not shy away from the diversity topic so I can continue to make the service better every day,” Simmonds says.

That face-to-face, that human contact component — that’s what technology will never be able to replace when it comes to policing, Blais adds in.

You can have all the connected devices (HRP recently completed a study that found body worn cameras would not be an advantage for the city) and fancy algorithms you want, he says, but when the call comes in regarding a drunk driver or when someone has been assaulted, there isn’t a button to push to handle it — you still have to send in a person.

“It isn’t technology that drives or contributes to those interactions; it’s the quality of the officer,” Blais concludes.