Const. Sharlene Bourdeau is the officer behind the Tree of Hope project in Thunder Bay to remember MMIWG. Photo: Thunder Bay Police Service

With the holidays around the corner, Const. Sharlene Bourdeau of Thunder Bay, Ont. has started an initiative to remember Missing and Murdered Indigenous Women and Girls (MMIWG) all around Canada through the Tree of Hope.

When it comes to MMIWG, there are still approximately 1,000 to 4,000 cases that remain unsolved Canada-wide. Reclaiming Power and Place: The Final Report of the National Inquiry into Missing and Murdered Indigenous Women and Girls states that Indigenous women and girls are 12 times more likely to be murdered or go missing than any other women in Canada. Statistics Canada also reports that homicide rates for Indigenous women were nearly six times higher than for non-Indigenous women between 2001 and 2015.

Bourdeau is an Indigenous police officer with the Thunder Bay Police Service, hailing from Pays Plat First Nation community, which is located near Rossport, Ont. She said she has friends who were affected by the wide-reaching tragedies connected to MMIWG, including a co-worker whose mother was murdered.

“There is also a community friend who sits on the committee, Sharon Johnson,” Bourdeau said. “Her sister was found murdered on the banks of the Neebing-McIntyre Floodway in Thunder Bay in February 1992… I think every murdered Indigenous woman and girl affects me personally because I am Indigenous myself and, being a police officer, I have dealt with so many grieving families regarding issues like these.”

It was this moving, personal connection that sparked the Tree of Hope initiative, a first-time, one-of-a-kind campaign dedicated to bringing awareness to the general public regarding the “appalling” MMIWG statistics and providing families with the reassurance their loved ones are not forgotten.

The campaign consists of three main components: lighting Christmas trees to remember MMIWG as the light bulbs each symbolize a life, a GoFundMe page and a Crime Stoppers tips invitation on the Tree of Hope website.

The Tree of Hope campaign kicked off by stringing 1,200 red lights on one of the four Christmas trees selected for the project in Thunder Bay. Each red light on the four trees represents an MMIWG in Canada.

“Red signifies the red dress and that’s significant to each MMIWG,” Bourdeau explained, nodding to the well-known REDress Project. That installation art project was created by Winnipeg-based artist Jaime Black in 2011 to honour, remember and bring awareness to the issue of MMIWG.

In a 2017 Toronto Life interview, Black further elaborated on the project’s symbolism: “Red is a really powerful colour in Indigenous communities. It’s the colour of life and blood. It’s what connects all of us to each other. It’s a very sacred colour, and it also represents the violence that these women are facing. When I was 17, I read a powerful book by Maria Campbell called The Book of Jessica. It’s about a Métis woman’s experience moving to an urban environment. About a year ago, I realized the book cover is a painting of an empty red dress. Obviously, the image has been in my head for a very long time.” 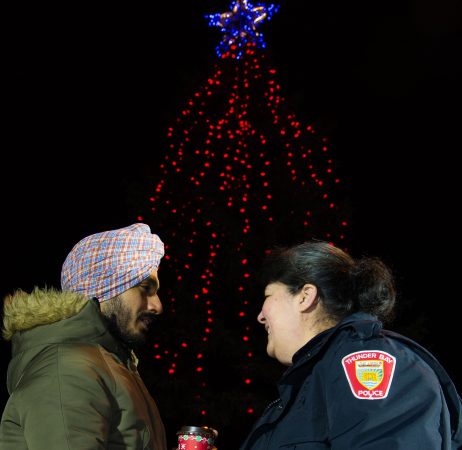 Blue stars are also glowing from atop the four trees, signifying law enforcement support in this issue, according to Bourdeau.

The first annual tree lighting ceremony took place on Nov. 24, 2019, just outside police headquarters. “This is the first time that a tree has been lit at our service and it was truly an astounding sight to see,” Bourdeau said.

The Tree of Hope’s vision is to acknowledge the value of all MMIWG, grow the GoFundMe account to help solve these specific cases, achieve arrests through CrimeStoppers tips, and offer closure to the families of these women.

Bourdeau said she hopes through the Tree of Hope others in the policing community are encouraged to incorporate more Indigenous-led incentives around Canada.

Next, she took the project to the Thunder Bay Police Association.

“It was met with overwhelming support and they actually started the donation account by donating $1,000 to start it off.”

The secretary of association, Anna Barile, volunteered to be on the Tree of Hope committee. Her 14 year-old son, Noah Barile, also became a part of the project as a youth member. He designed the website for the Tree of Hope, manages their social media campaign and created the GoFundMe account for the platform.

“I realized it was an opportunity for youth involvement, to become a responsible citizen and to further educate myself about these cases and the extend of violence towards MMIWG,” he said.

Another goal with the Tree of Hope is to highlight the sensitive but critical intersection with law enforcement when it comes to MMIWG.

Donations from the GoFundMe account will go to an RBC CrimeStoppers account with a goal of accumulating $48,000. The payout will be rewarded to an individual who provides information leading to an arrest in crimes against MMIWG. Donations will also go towards sponsoring a light bulb for one of the four Trees of Hope.

Bourdeau stressed the importance of not only donating, but also helping solve even one of these cases.

“It’s a domino effect. We all know that police services do their best with investigating but this is just an added support for their families. We really do care and we are not going to forget.”

Zeba Khan is an intern at Blue Line and a journalism student at Centennial College in Toronto.