DUBAI, United Arab Emirates — South Korea’s Kim Jong Yang was elected as Interpol’s president on Wednesday, edging out a veteran of Russia’s security services who was strongly opposed by the United States, Britain and other European nations. 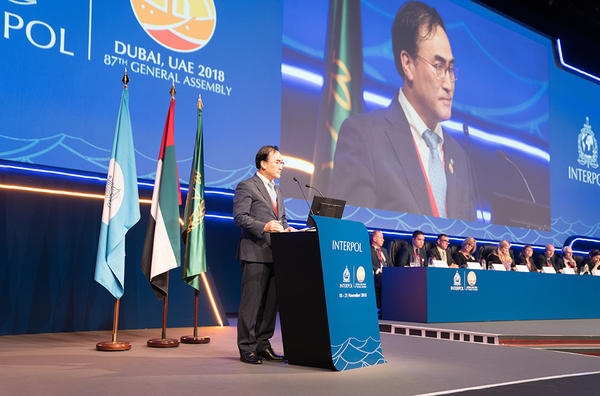 Kim’s surprise election was seen as a victory for the White House and its European partners, who had lobbied up until the final hours before the vote against Alexander Prokopchuk’s attempts to be named the next president of the policing organization.

The U.S. and others expressed concern that if Russia’s candidate had been elected, that would have led to further Kremlin abuses of Interpol’s red notice system to go after political opponents and fugitive dissidents.

Russia accused its critics of running a “campaign to discredit” its candidate, calling Prokopchuk a respected professional.

Kim’s win means he secured at least two-thirds of votes cast at Interpol’s general assembly in Dubai on Wednesday. He will serve until 2020, completing the four-year mandate of his predecessor, Meng Hongwei, who was detained in China as part of a wide anti-corruption sweep there.

Kim, a police official in South Korea, was serving as interim president after Meng’s departure from the post and was senior vice-president at Interpol.

Russia’s Interior Ministry said after the vote that Prokopchuk, who is one of three vice-presidents at Interpol, will remain in that position. Spokeswoman Irina Volk told the Interfax news agency that Prokopchuk will “focus on advancing the stature of Interpol in the international police community and making its work more effective.”

Most of Interpol’s 194 member-countries attended the organization’s annual assembly this year, which was held in an opulent Dubai hotel along the Persian Gulf coast.

Interpol was facing a pivotal moment in its history as delegates decided whether to hand its presidency to Prokopchuk or Kim, who were the only two candidates vying for the post.

Based in the French city of Lyon, the 95-year-old policing body is best known for issuing “red notices” that identify suspects pursued by other countries, effectively putting them on the world’s “most-wanted” list.

Critics say countries like Russia, Turkey, Egypt, Iran and China have used the system to try to round up political opponents, journalists or activists, even though its rules prohibit the use of police notices for political reasons.

The agency faced criticism two years ago when Interpol’s member-states approved Meng as president for a four-year term. Amnesty International has criticized “China’s longstanding practice of trying to use Interpol to arrest dissidents and refugees abroad.”

In 2016, Interpol introduced new measures aimed at strengthening the legal framework around the red notice system. As part of the changes, an international team of lawyers and experts first check a notice’s compliance with Interpol rules and regulations before it goes out. Interpol also says it enhanced the work of an appeals body for those targeted with red notices.

Still, member countries can issue requests, known as diffusions, directly to other countries using Interpol’s communication system, without going through the centralized Interpol vetting that’s in place for red notices. Watchdog groups are urging Interpol to reform the diffusion system too.

Bill Browder, who runs an investment fund that had once operated in Moscow, says Russia used the diffusion system against him, which led to his brief arrest in Spain earlier this year.

Browder and another prominent Kremlin critic, oligarch-turned-dissident Mikhail Khodorkovsky, warned Tuesday that electing Prokopchuk— who has ties to President Vladimir Putin— would have undermined the international law enforcement agency and politicized police co-operation across borders. Prokopchuk was in charge of facilitating Interpol warrants on behalf of Russia.

Browder and Khodorkovsky — who are reviled by the Kremlin — celebrated the result of the Interpol vote. Browder told The Associated Press on Wednesday that “Common sense has prevailed in a dark world. This is a real humiliation for Putin, who thought he’d get away with it.”

A lawyer who wrote a book on Interpol, Christopher David, hailed Kim’s election as “a solid, uncontroversial choice.” He said in a statement that if Interpol is to be a credible crime-fighting resource, Kim must increase transparency “to demonstrate and maintain its political neutrality.”

A day before the Interpol vote, the White House had come out publicly against the election of Prokopchuk, with National Security Council spokesman Garrett Marquis saying “the Russian government abuses Interpol’s processes to harass its political opponents.” U.S. Secretary of State Mike Pompeo said Washington was encouraging all nations and organizations that are part of Interpol to choose Kim.

Russia, however, secured a win for its ally Serbia on Tuesday when Kosovo’s bid to join Interpol failed to garner enough votes at the general assembly in Dubai. The move would have boosted Kosovo’s efforts at recognition of its statehood. Kosovo declared independence from Serbia in 2008.

Germany is congratulating the newly elected president of Interpol and warning against politicizing the global police co-operation agency.

Foreign ministry spokeswoman Maria Adebahr said Berlin is “convinced that Kim Jong Yang is a good choice” and pointed to a “clear election result” in his favour.

Interior Minister Horst Seehofer said the priority for the new president should be ensuring “stability and continuity” in Interpol’s work.

Seehofer said in a statement that “all tendencies to politicize the organization and its work should be counteracted.”