A new approach to find unmarked gravesites could help narrow the scope and potentially speed up the search for clues during crime scene investigations. 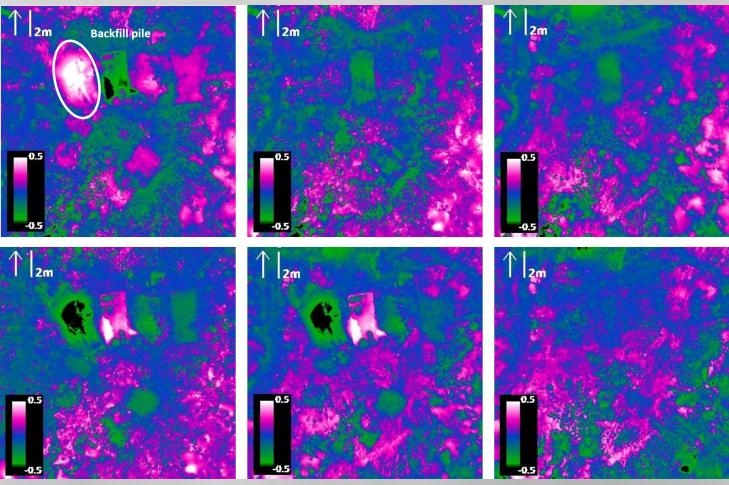 An ORNL-led research team was the first to quantify the differences in elevation and demonstrate the future potential benefit of incorporating terrestrial LIDAR into existing data-collection approaches to locate unmarked graves.

The team’s method could complement existing technologies and procedures currently used in forensic casework, including pedestrian surveys that rely solely on the naked eye and ground-penetrated radar, or GPR.

Law enforcement and others surveying an area who rely on their vision alone may not notice unmarked human graves because their surfaces are often camouflaged by grass or weeds, leaf litter or other debris. GPR is useful to detect subsurface abnormalities but is limited in how much area it can survey.

With near-field approaches such as GPR, investigators must already know the approximate locations of a suspected grave. However, remote sensors like LIDAR can be operated from a standoff distance, allowing investigators to cover more area in their search.

Corcoran partnered with colleagues and students with the Forensic Anthropology Center at UT Knoxville who prepared a site with three human graves of varying sizes, including one mass grave; one control pit and surrounding undisturbed ground.

Using a tripod-mounted terrestrial LIDAR sensor, the team scanned the test area four times over a 21-month period, picking up millions of data points that collectively painted a digital picture of what was happening at the ground’s surface. The sensor returned a 3D coordinate that is representative of the object encountered in the field.

“We analyzed the sensor data from all four scans and compared changes in the elevation of the ground’s surface—changes that were caused by disturbances of the soil as the bodies were decomposing,” Corcoran said.

“Our study is the first to quantify the differences in elevation and demonstrates the future potential benefit of incorporating terrestrial LIDAR into existing data-collection approaches to locate unmarked graves,” she added.

LIDAR and other remote sensing technologies are also important tools for humanitarian contexts.

“This study helps forensic human rights investigators better understand the geophysical signature of graves, because it reduces the amount of time a team must be on the ground in active conflict situations,” said Dawnie Steadman, director of the Forensic Anthropology Center at UT.

Funding for the study was provided by the Army Research Office and the Defense Biometrics and Forensics Office to support the Defense POW/MIA Accounting Agency, and supported by a Cooperative Research and Development Agreement with the National Geospatial-Intelligence Agency.

ORNL is managed by UT-Battelle for the DOE Office of Science. The single largest supporter of basic research in the physical sciences in the United States, the Office of Science is working to address some of the most pressing challenges of our time.

This article originally was originally published on the ORNL website and appeared here.
Print this page