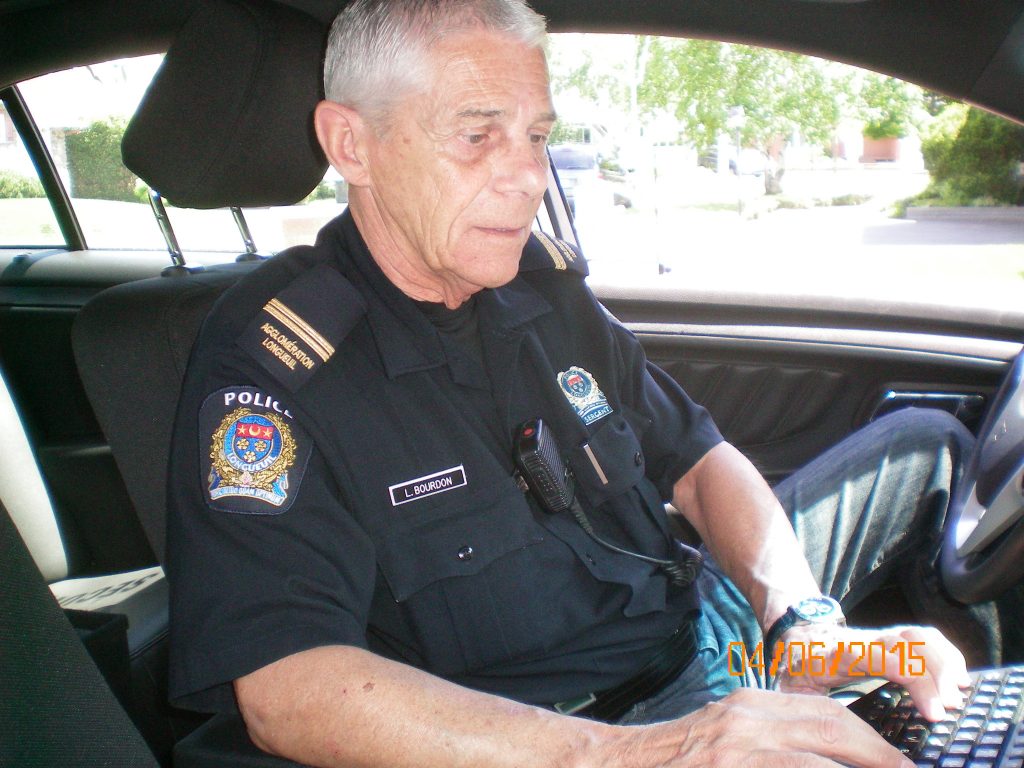 Sgt. Lionel Bourdon of le Service de police de l’agglomération de Longueuil (SPAL) in Quebec started his career at police de Ville Jacques-Cartier in 1965. He is still actively on duty — his service says he’s the longest serving police officer in Quebec. In fact, SPAL’s media relations says Bourdon just might be in the running for the longest serving officer in the whole country. Below, he shares more of his memories with Blue Line.

Q: Congratulations on 55 years in law enforcement! What does it feel like to have such a long career?

For me, this has been a very beautiful adventure and the years have passed very quickly. I consider myself privileged to have had the chance to be a police officer. I understood that it was not an ordinary job; you had to have a passion for people and public safety. Our work is demanding but it is also rewarding and exciting.

Q: Why did you choose a career in law enforcement?

When I was young, we lived in a house by the police station. Longueuil was a small village of about 25,000 inhabitants then. Every day I saw the police on foot, on a motorbike, or in a car leaving and returning to the police station, passing in front of my house. Often when I came back from school, I walked with a policeman who was returning to the station near my home. Later on, around 18 or 19 years-old, I chose this profession because contact with the population was essential for me and also because I knew it would not be a stagnant career choice.

Q: How has policing changed for you over these 55 years?

At the time, in 1965, the salary was $72 a week and, minus taxes, there was $ 56 left. The means of communication were far from what they are today. There was only a fixed radio inside the vehicle. As for service weapons, we went from a simple 0.38 caliber revolver with six bullets to 9mm pistols with three magazines of 15 bullets. Next came the pepper bottles and taser guns, not to mention the evolution of radar devices, the arrival of portable radios and cell phones, etc.

Many other aspects of our work have also evolved, such as investigative methods, the arrival of DNA, community policing and the computer age.

Q: What is your most memorable moment from your 55 years on the job?

Q: What has been your favourite role over the years… We know you worked in patrol, the department of judicial identity, in investigations as a detective, and now in road safety?

I loved working as an investigator from 1973 to 1986. One of my biggest investigations was the theft and extortion of $3 million at Wells Fargo Co. Given the importance of this investigation, I worked for several months with the Sûreté du Québec’s major crime investigators, which also allowed me to deepen my knowledge.

Q: What does an average day for you look like now?

Currently, there are 20 officers and two sergeants in the road safety section and I supervise a team of 10 officers in the southern district. My tasks are the assignment of agents, the management of schedules, holidays and vacations, overtime; the treatment of complaints from citizens; the preparation of our operational plan and participation in traffic committees for the cities in the agglomeration.

Q: What is your advice for someone just starting their career in law enforcement?

When a recruit enters the field, he or she must realize that the practice differs from theory. At school you learn the basics but each organization has different protocols and it takes a long time to be really operational. The police work becomes more complex over time, so always be very careful during your daily interventions. Also, I would say that it is important to treat the citizens with whom we carry out our interventions as if they were members of our own family. It is through this professional behaviour that the police will gain respect from citizens.

Q: What are your hopes for the future of policing?

For the future, I believe that the modernization of the service will be important and a vital condition for maintaining the bond of trust with the community.

Q: Do you have plans for retirement?

Before leaving the police force, I would like to start setting up a museum, which will be dedicated to the history of police officers here to save the collective memory and bear witness to the progress made. Over the years, I have kept several old objects (radar, breathalyzer, camera, badge, clothing, etc.) as well as many photos and I would like to demonstrate to the new police officers, as well as to citizens, how quickly police services are evolving.

Find this Q&A in the October 2020 edition of Blue Line.