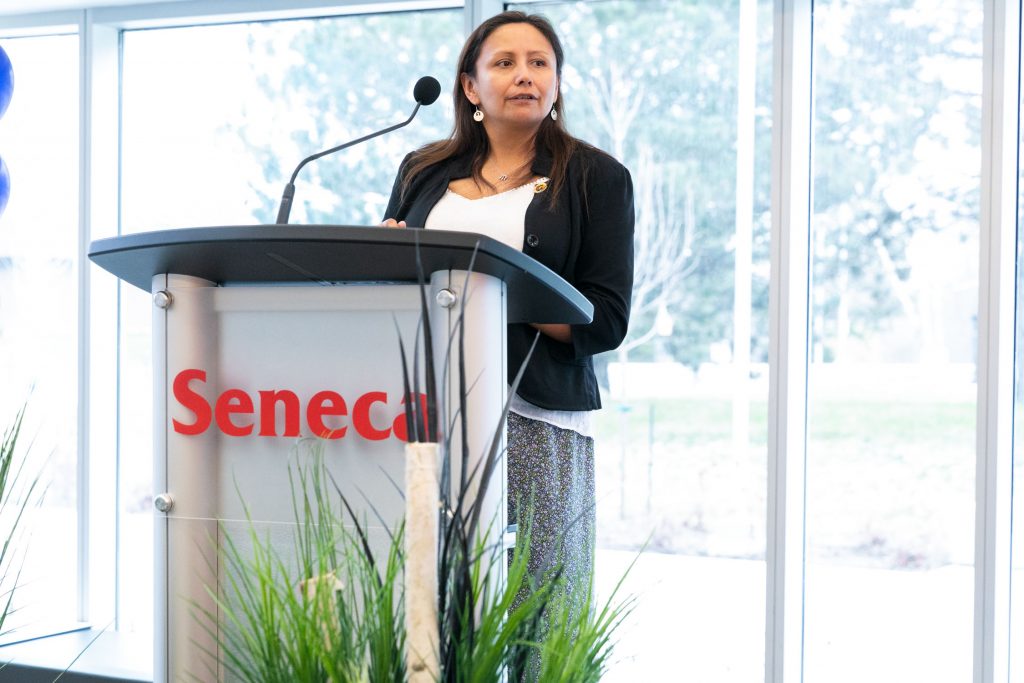 Plenty has changed at Seneca College since it first launched its police foundations programs 50 years ago. For one thing, there used to be a firearms range at Newnham Campus in Toronto.

“That was exciting and nerve-racking at the same time,” recalled Const. Monica Rutledge about practising on the .38 special revolvers when she was a student studying police foundations at Seneca.

For another, the program used to be called Law Enforcement prior to 1998.

But, to start from the beginning, the program was only a couple of night school classes in 1969, in an industrial building on Sheppard Avenue. Before long, though, the classes turned into a full-fledged program at Newnham Campus, moving later to King Campus where today, police foundations is the largest program with 450 full-time students in the School of Public Safety.

It’s also the longest-running law enforcement program in the province, and on April 30, students, alumni, employees and special guests gathered in Magna Hall at King to celebrate its 50th anniversary.

“So much has changed. When I was here, we had no computer labs, no Tim Hortons,” said Rutledge, who graduated in 1995. “We used to take these long bus rides to get to King Campus and we’d hang out in the hallway or in study groups.”

An Ojibway from Red Lake, Ont., Rutledge has been working with the Toronto Police Service since 2000, the last few years in the Aboriginal Peacekeeping Unit to bridge the gap between the Indigenous community and the police force. As part of the celebration at King, she was honoured during a special Senecans of Distinction Awards presentation along with recipient Thomas Carrique, Commissioner of the Ontario Provincial Police and former member of the Seneca Board of Governors.

“Seneca has a great program. It was very informative and the faculty were great,” Rutledge said. “By the time I graduated, I knew how to work the Criminal Code and the Highway Traffic Act. Having that under my belt gave me the foundation I needed to go on and become a police officer.”

Over the years, the police foundations program has grown from having faculty members who are former police officers and members of the Royal Canadian Mounted Police to include former Canadian Armed Forces members, criminologists, psychologists and former lawyers.

“That brought in a different perspective to the curriculum,” said George Fry, who oversaw the program’s transfer and expansion to King in 1984 as chair. “Back then, King had less than 1,000 student population. We weren’t there as a police college. We were there as a community college that offered training in law enforcement and many of our graduates were getting hired in the private sector.”

Fry said his goal at the time was to ensure the new faculty hiring process was dedicated to hiring people with both formal training and relevant industry experience.

“Our professors are highly dedicated,” he said. “They are able to give a true sense of what the students can expect on the job. They care about the students and are there for them. They want to make sure the students get the best education and training they need.”

Professor Rodney Sine graduated from the program in 1976 and went on to have a 33-year career with York Regional Police as a staff sergeant. He has been teaching part time at Seneca since 1986.

“The students today are like me back then. I had just graduated from high school and didn’t know what to do,” he said. “Looking back, not only am I blessed to have graduated from Seneca, but the most rewarding part of my life has been teaching here and helping students get into a career in policing or to further their education with another public safety program such as 911 and emergency services communications.”

The 911 certificate program at Seneca is just one of the few that complements the police foundations diploma. Others include the Advanced Investigations & Enforcement graduate certificate program and the recently launched Honours Bachelor of Crime & Intelligence Analysis degree program. The first program of its kind in Ontario, Crime & Intelligence Analysis offers an advanced entry for eligible police foundations grads to complete the program in two years.

“We have evolved from the original concept of community policing to a program with a broader focus that can be applied to many fields,” said Professor Rick Collett, who began teaching at Seneca in 1995.

A former Toronto inspector, Collett has been working with Seneca and helping to shape its curriculum since the early days. He was a member of the program’s advisory council in 1991 and was part of the group that worked with Seneca to put together the first multicultural training package for police officers in 1976.

“Seneca was the first to do that,” he said. “The program had an excellent reputation in the industry back then as it still does today.”